Please ensure Javascript is enabled for purposes of website accessibility
Log In Help Join The Motley Fool
Free Article Join Over 1 Million Premium Members And Get More In-Depth Stock Guidance and Research
By John Ballard - May 10, 2021 at 9:36AM

The company raised its outlook for 2021 and sees a bright future for the gaming industry.

Corsair Gaming (CRSR -0.86%) continued to experience high demand for its gaming peripherals and PC-building components in the first quarter of 2021.

A quick look at the headline numbers shows total revenue jumped 72% year over year, but a shift to higher-margin streaming products contributed to a robust increase in adjusted earnings per share of 420% over the year-ago quarter.

During the first-quarter earnings call, CEO Andy Paul said the company saw continued growth in players buying components to build $2,000-plus gaming PCs. Clearly, the pandemic-driven momentum is still with the company in early 2021, but Paul also noted that Corsair is nowhere close to realizing its long-term opportunity.

"The vast majority of people that are playing video games have bought no specialist gaming gear at all," Paul said. Here's why that statement could spell big returns for investors. 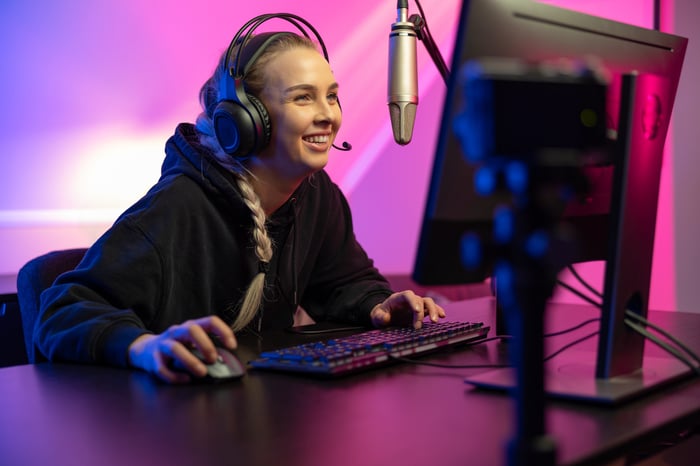 Corsair has plenty of room to grow revenue

Corsair Gaming is a leading brand in the gaming peripherals and components market. It held the No. 1 market-share spot in the U.S. in the first quarter across every component category related to gaming. Corsair has extensive distribution channels to sell its products across major retailers and specialty computer stores.

Based on its brand strength and vast distribution network, Corsair is in a great position to capitalize on growth in the gaming industry, where it's estimated that as many as three billion people will be playing games by 2023.

However, as management pointed out during the earnings call, only a small fraction of these players spends money on specialized gaming gear such as mice, keyboards, and microphones. This is a good thing for investors, since it obviously points to a very large opportunity for Corsair Gaming as more players dive into video games and upgrade their hardware as a result.

How big is Corsair's opportunity? The total amount of money spent on video games in 2020 was $174 billion, according to Newzoo. But annual spending on gaming peripherals, streaming gear, PC components, and prebuilt PCs and laptops was estimated at $46 billion, and that's an increase of 28% over 2019.

Corsair generated just $1.7 billion in revenue in 2020, which leaves a massive gap compared to its addressable market. Still, investors shouldn't expect a quick reward. Although management raised its revenue guidance for 2021, it still expects a lower rate of growth following the recent surge in sales.

Nonetheless, there are a few reasons why Corsair could beat its own expectations.

Is management's guidance too conservative?

Full-year guidance calls for revenue to reach $1.9 billion to $2.1 billion, representing year-over-year growth of 17% at the midpoint. That's a modest increase compared to the 55% growth rate in 2020, although management admitted it's being conservative in its outlook.

Paul said during the earnings call that the company currently expects lower growth in the second half of 2020. But consider what he said next: "But so far, clearly, we're seeing a lot higher acceleration than we planned."

There are clues outside of Corsair's results that show the gaming market is still red hot. Top game producer Activision Blizzard just reported it is seeing strong engagement trends carry over to the second quarter in Call of Duty: Warzone, one of the most popular titles on the market. Interest in esports titles is a fundamental driver of revenue for Corsair's gaming products, which are specifically designed for the rigors of competitive multiplayer games such as Warzone.

While Corsair management doesn't want to get ahead of itself and get too optimistic about the near term, it is also not ruling out growth could remain higher than expected, even as it wrestles with supply chain shortages: "[W]e're pretty optimistic but no reason yet to get ahead of ourselves and suggest that there's going to be massive growth in the rest of the year," Paul said. "But obviously, there could be."

The stock is down down 7% year to date as growth stocks have fallen out of favor in 2021. This could be a good buying opportunity for growth investors as video games captivate an increasing number people, especially among the younger generations.