Please ensure Javascript is enabled for purposes of website accessibility
Log In Help Join The Motley Fool
Free Article Join Over 1 Million Premium Members And Get More In-Depth Stock Guidance and Research
By Rich Duprey - May 10, 2021 at 11:45AM

April's total was the highest for that month since the FBI began record-keeping.

President Biden issued six executive actions on guns last month, and though they did not go nearly as far as gun control activists would like, they helped spur additional growth in gun sales.

The FBI reported it conducted over 3.5 million background checks in April, up 21% from last year and the most it's ever done for that month since it began keeping records in the late 1990s. 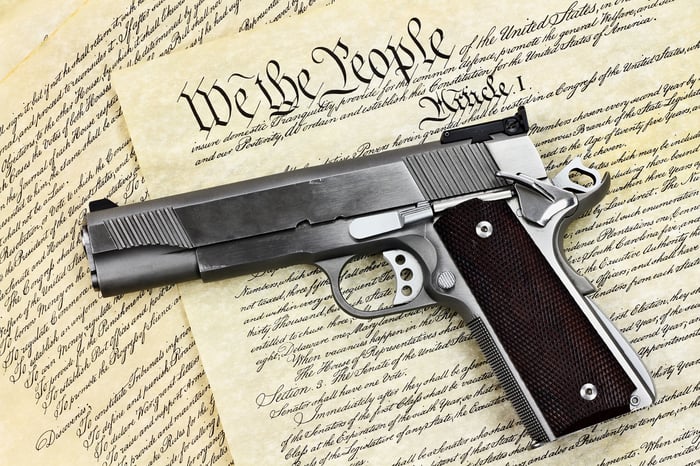 Even after the National Shooting Sports Foundation adjusts the raw data to account for duplicate checks, such as those on existing concealed carry weapon permit holders, the nearly 1.7 million background checks is still a record number for April and is helping push gun sales from Smith & Wesson Brands (SWBI -0.91%) and Sturm, Ruger (RGR -1.09%) to new heights.

In March, Smith & Wesson reported that firearms sales for its fiscal third quarter doubled to $258 million, the third consecutive quarter they've risen by 100% or more. Ruger's sales growth has been more muted than its rival's, rising 39% in 2020 but jumping 61% in the fourth quarter. It was able to achieve that growth, though, by eliminating most promotional efforts while also raising prices.

Basically, guns are selling themselves these days. And that extends to ammunition, too, which remains in short supply.

Vista Outdoor (VSTO -1.06%), which makes the leading Federal brand of ammo, has taken to YouTube several times to plea for understanding from gun owners that it was working full-tilt to meet demand. Privately held Hornady has also asked for patience from consumers.

The executive actions Biden issued last month essentially called on agencies in his administration to tighten up regulations and compile reports. Among the actions Biden took, he wants to

However, executive actions are different than executive orders as they carry little legal weight and are not subject to court review. They are also much less strident than the issues Biden campaigned on, but because Biden's actions are setting the tone for his administration's policies toward firearms ownership, they created a lot of consternation among gun owners.

Biden called on Congress to take up those thornier issues from the campaign, such as so-called universal background checks, banning online gun sales, limiting the number of guns a person can purchase, or banning semiautomatic rifles that look like military weapons but otherwise function just like other rifles.

Still shooting out the lights

Expecting the Biden administration would be much more restrictive on gun rights, the FBI has conducted almost the same number of background checks in just the first four months of 2021 as it did for all of 2011.

It seems clear this year will break all previous records for background checks and gun sales by a wide margin. Look for gun manufacturers and ammo producers to continue reporting record sales for some time to come.