Please ensure Javascript is enabled for purposes of website accessibility
Log In Help Join The Motley Fool
Free Article Join Over 1 Million Premium Members And Get More In-Depth Stock Guidance and Research
By Billy Duberstein - May 10, 2021 at 9:00AM

A faster-than-expected vaccination campaign increased hopes of a sooner restart for cruising from U.S. ports.

Shares of Norwegian Cruise Line Holdings (NCLH 0.07%) rose 12.5% in the month of April, according to data from S&P Global Market Intelligence. The cruise line got a double dose of good news: the Centers for Disease Control and Prevention held talks with the CEOs of all major cruise lines in the middle of the month, and as a result of the communication, the CDC stated that cruising could start from U.S. ports as early as mid-July, as long as cruise companies adhered to the CDC's Framework for Conditional Sailing Order. In addition, the company received a positive report from sell-side analysts at Goldman Sachs.

At the beginning of April, the date for cruise resumption from U.S. ports may have seemed further off than July. The CDC had originally proposed a gradual, phased-in approach to resuming cruising from U.S. ports. However, the pace of U.S. vaccinations has accelerated and COVID-19 case numbers have fallen. As a result, the CEOs of all three major cruise lines met with the White House COVID-19 response team and the CDC in mid-April, making their case for a quicker resumption of cruising, given progress on vaccinations and the companies' own implementation of safety protocols. At the end of April, the CDC clarified its checklist steps and guidelines for a potential July reopening, should the cruise lines reach compliance. 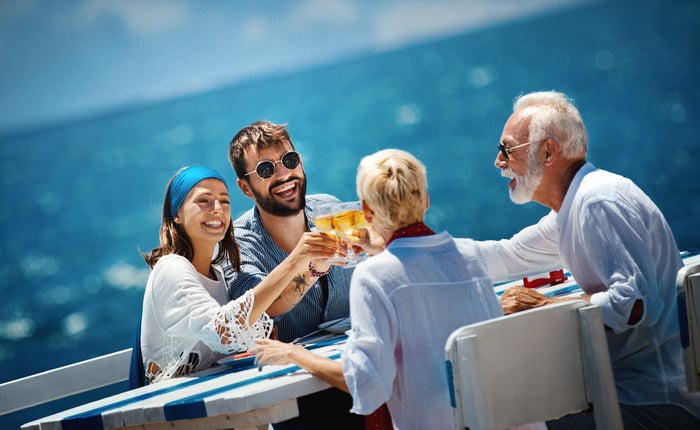 In another positive turn, Norwegian received an upgrade from Goldman Sachs analyst Stephen Grambling, who praised Norwegian for having the best growth potential and lowest debt-to-EBITDA ratio in the industry post-pandemic. Grambling put out a $37 price target on the stock, well north of the Norwegian's current $28.50 stock price.

It was an encouraging month for the cruise lines, as the CDC gave more clarity on a firm timeline to restart cruising; however, there is also the potential for setbacks, as strict CDC protocols could take some time to implement. Crew members still need to receive clearance and vaccines, and CDC compliance could add costs for this summer's cruises.

Nevertheless, the cruise companies look like they are on their way to broadly restarting operations in earnest this summer. Even before the back and forth with the CDC, Norwegian had already unveiled its plan for restarting cruises originating in Europe and in the Caribbean across its Norwegian, Oceania, and Regent lines. And demand seems to be there, with management announcing on its recent earnings release that future bookings had doubled over the prior quarter, with customers looking to reserve cruises well into the future.