Please ensure Javascript is enabled for purposes of website accessibility
Log In Help Join The Motley Fool
Free Article Join Over 1 Million Premium Members And Get More In-Depth Stock Guidance and Research
By Dave Kovaleski - Updated May 11, 2021 at 10:33AM

These two digital payments leaders have been juggernauts, but is one a better investment than the other?

Chocolate or vanilla? Brady vs. Montana? LeBron vs. Jordan? There's no right answer when you're talking about that level of excellence. OK, maybe there is -- especially with Brady, and chocolate -- but we won't get into that right now.

It is also hard to compare two of the best fintech stocks out there -- PayPal Holdings (PYPL 2.01%) and Square (SQ 2.28%). Both are growth machines that been great investments and likely will continue to be. But is one a little better than the other? 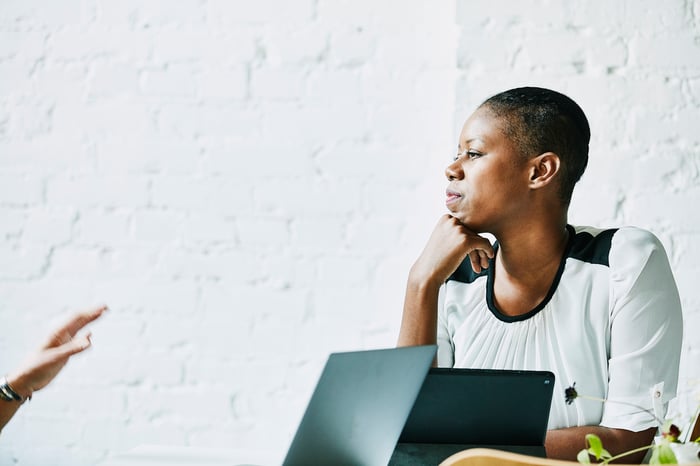 PayPal is one of the granddaddies of fintech, having launched in 1998. The company, whose platforms allow users to send and receive money digitally, is coming off a record year in 2020 as more businesses and individuals turned to digital payments during the pandemic.

This year is off to an even better start, as the company posted record numbers in the first quarter, driven by a continued shift toward the digital economy. The company brought home $6 billion in revenue, up 30% year over year, while TPV was $285 billion in the quarter, up 50%. Earnings per share shot up to $0.92 per share from $0.07 a year ago. Further, 14.5 million net new accounts were added, bringing the total to 392 million users. Venmo, the mobile payments app, accounted for $51 billion of TPV, up 63% year over year. The company began allowing users to buy and sell cryptocurrencies on Venmo in the quarter.

Late last year, PayPal rolled out an initiative allowing people to pay on Venmo with QR codes. Demand is high, as already over 1 million merchants are accepting the QR codes. Also, PayPal has been added to Alibaba's marketplace as a payment option, opening up huge potential in China. The company anticipates another big year in 2021 with revenue up 20%, TPV up 30%, 52 to 55 million net new accounts, and earnings per share at $3.33.

"Our products are an essential enabler of the digital economy, and our mission to shape a future where everyone can participate fully in this new digital paradigm has never been more important," CEO Dan Schulman said on the first-quarter earnings call.

Square, also a digital payment company, has been on a rocket ship since it went public in 2015. Last year, the company had its best year ever, for many of the same macroeconomic reasons as PayPal, as the stock returned 247%.

Square has evolved from the provider of the credit card reader you attach to your phone. Today, it not only offers various payment services to merchants; Square has the Cash App, which, like Venmo, allows customers to send and receive money. And in 2021, Square added bank to its title, as it launched an industrial loan bank to primarily offer loans to small businesses. Square offered $531 million in Paycheck Protection Program loans in the first quarter and the bank will allow Square to expand banking services more small businesses, CEO Jack Dorsey said on the earnings call.

Square reported first-quarter earnings on Thursday, and it was another blowout quarter. Overall, the company processed $33.1 billion in gross payment volume in the first quarter, a 29% increase. Net revenue was up 266% year over year to $5.1 billion, while gross profit was $964 million, up 79%. The merchant or seller universe generated $1 billion in revenue and $468 million of gross profit, up 19% and 32%, respectively, year over year. The Cash App accounted for $4 billion in revenue and $495 million in gross profit, up 666% and 171%, respectively. Net income was $39 million, or $0.19 per share, up from a net loss a year ago.

Two of the big revenue drivers were Bitcoin and the Cash Card, which is a debit card tied to the Cash App account. Bitcoin transactions generated $3.51 billion in revenue, which is obviously a huge amount. But it's a little misleading because Square only generated $75 million in gross profits from bitcoin. The vast discrepancy is related to how Bitcoin revenue is accounted for. But still, the $75 million in gross profit is up 11 times over the previous year as demand for Bitcoin surged. The Cash Card had $10 million users at the end of the quarter with 7 million weekly active users, which is double the number from a year ago. The company also bought Tidal, the music streaming business owned by Jay-Z.

As stated in the introduction, you can't go wrong with either one of these stocks. They are both leaders in the digital payments space, they are innovative, well-run, and heading downwind into the digital economy. But if I had to pick only one, I'd go with PayPal. It has a longer track record and earnings history, and it is by far the biggest player in the business it basically invented, the digital payments business.

Both are huge growth machines, but PayPal has more free cash flow, lower debt to equity, and higher margins. Much of that is because Square is still a relatively new company that is still investing heavily in the business and is just starting to generate consistent quarterly earnings. Ideally, you want to invest in both, but if you could only pick one, I would take PayPal.