Please ensure Javascript is enabled for purposes of website accessibility
Log In Help Join The Motley Fool
Free Article Join Over 1 Million Premium Members And Get More In-Depth Stock Guidance and Research
By Adria Cimino - Updated May 11, 2021 at 9:33AM

Here's the recipe so far: market leadership and global expansion.

Beyond Meat (BYND 0.08%) has already made many millionaires. Shares of the maker of plant-based protein climbed more than 240% in their first two months of trading back in 2019. Since, they've pared gains as investors worried about competition -- and more recently, the impact of the pandemic.

Still, the maker of the Beyond Burger remains a market leader. And its shares are up 81% since their market debut. Now, the question is whether Beyond Meat still has the potential to make you a millionaire. Let's take a look. 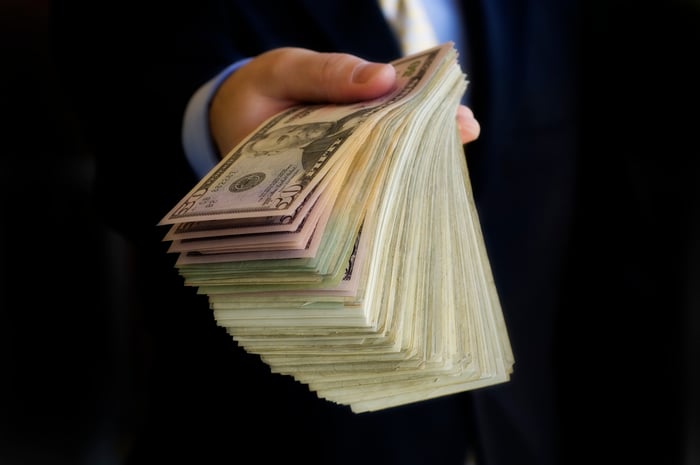 Reason to be excited

Investors have had good reason to be excited about Beyond Meat. Before the pandemic, the company repeatedly reported triple-digit quarterly net revenue growth. The company also has expanded across two sectors -- retail and foodservice.

Beyond Meat sells its products at 28,000 retail stores -- such as Target and Kroger -- across the U.S. The company recently said it's expanding its variety of products sold there to include items such as its Beyond Meatballs. And for good reason. Beyond Meat was the top-selling alternative meat brand in the refrigerated section at grocery stores, according to SPINS data in February.

The company also is increasing its presence in Europe. Last month, Beyond Meat said it's launching in 445 new retail locations in the U.K., 155 stores in Switzerland, and thousands of locations across Germany, Austria, and the Netherlands.

As for foodservice, Beyond Meat has struck deals with restaurant chains including McDonald's and restaurant operators such as Yum! Brands. These partnerships involve serving Beyond Meat products as part of plant-based offerings or test offerings at the restaurants.

All of this sounds like a good recipe for success. But profits have been elusive. 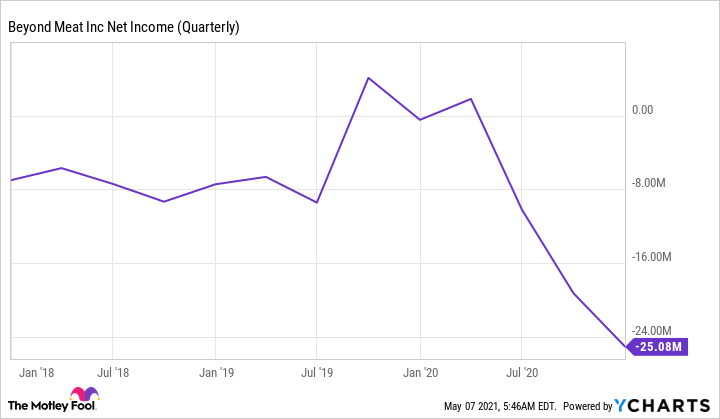 Impact of the pandemic

And the pandemic hasn't helped matters. It has weighed on Beyond Meat's sales to restaurants. Prior to the pandemic, foodservice sales made up half of total annual sales. So, this is an important element in the path to profitability. In the most recent quarter, U.S. foodservice sales slid 26% and international foodservice fell 44%. That's after declines in the past three quarters too. The company said the pandemic has resulted in less foot traffic in restaurants, fewer items on menus, and lower capacity. All this has reduced orders for Beyond Meat's products.

Of course, this situation is temporary. Restaurants eventually will resume normal operations -- and that should benefit Beyond Meat.

My bigger concern is competition. Beyond Meat faces rivals of all sizes. From big food companies such as Tyson to small start-ups like Memphis Meats. And its biggest rival of all may be Impossible Foods. The private company's products are available in 17,000 U.S. grocery stores and at 20,000 restaurants in various countries.

The good news is the market for plant-based protein is growing. At a compound annual growth rate of more than 19%, the market is forecast to reach $13.8 billion by 2027, according to Grand View Research. There probably is room for many players. Beyond Meat may face pressure on margins though -- so that's a point to watch.

Is Beyond Meat a millionaire-maker?

As we've seen, Beyond Meat has already satisfied the appetites of investors hungry to make a million. Can that happen again? A future recovery from the pandemic could be a catalyst for the stock. If Beyond Meat continues to grow retail sales and foodservice takes off once again, the shares could soar.

So, if you want to become a millionaire, Beyond Meat may help you get there -- but a diversified portfolio is a much better recipe.