Please ensure Javascript is enabled for purposes of website accessibility
Log In Help Join The Motley Fool
Free Article Join Over 1 Million Premium Members And Get More In-Depth Stock Guidance and Research
By Anthony Di Pizio - May 11, 2021 at 1:04PM

The short-form social media giant offered ambitious guidance to investors, but it may have bitten off more than it can chew.

Shares of Twitter (TWTR -1.10%) are down over 20% since its latest earnings release as investors reacted to the company's first-quarter report. While the company marginally beat analysts' estimates on the bottom line, results for key metrics like revenue and monetizable daily active user (mDAU) growth were on the sluggish side.

Earlier this year, Twitter laid out plans to double its $3.7 billion in 2020 revenue to $7.5 billion annually by the end of 2023, and to grow monetizable users by at least 60%. Despite a 19.6% sequential decline in revenue last quarter, the company says these plans remain on track, but it appears investors aren't buying it. 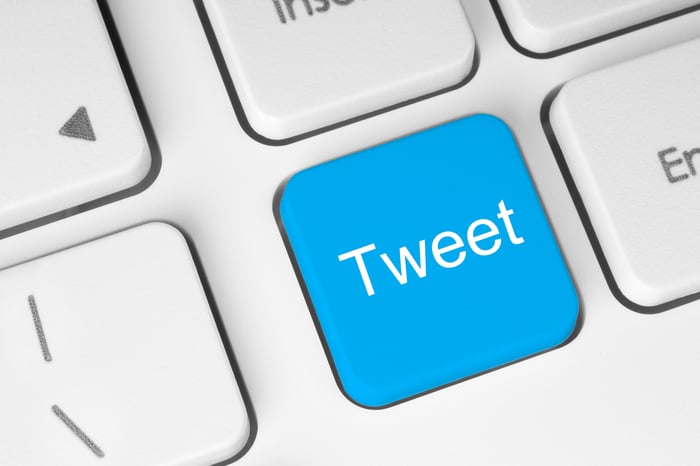 The reality of the company's historical revenue growth doesn't exactly meet these lofty expectations, having added just $417 million in 2019 and $257 million last year. Not only is this far below what Twitter needs, but growth also appears to be decelerating.

More to the point, first-quarter revenue fell to $1.04 billion, down from $1.29 billion in the fourth quarter of 2020, a near 20% contraction. Twitter is starting the year on the back foot in dollar terms, and it seems unlikely to grow as much as necessary to satisfy its long-term target -- this year, anyway. However, this figure did represent a 28% increase over the year-ago quarter, so the door remains open if it can seriously outperform in the remainder of 2021.

Monetizable daily active user growth was slightly more favorable. The metric grew 4% quarter on quarter and 20% year over year. However, only 306 million users will result from 4% sequential growth from now until the end of 2023, less than the 315 million the company projects. That changes if the company maintains its year-over-year trajectory, but that will be a very high hurdle due to tough comparisons in 2020 and the ongoing economic reopening.

The results so far suggest Twitter may be well short of the ambitious pitch it made to investors in February, and that is a big reason the stock fell so sharply after earnings day. If mDAU growth stops decelerating, it might reach the user target, but any sluggish quarters would put an end to the discussion.

Valuation versus (a lack of) earnings

At approximately $52 per share as of this writing, Twitter trades at a market value of $42 billion. This would be fairly reasonable based on 2019 earnings of $1.87 per share as it would represent a price-to-earnings multiple of about 28 times. But the company failed to deliver a similar result in 2020, instead losing $1.44 per share and leaving investor hopes pinned on the ambitious guidance discussed above.

Twitter falls right in the middle of two key social media competitors: Facebook, which trades at roughly 30 times 2020 earnings while continuing to grow its bottom line, and Snap, which repeatedly fails to deliver full-year earnings and instead trades at a rich 30 times 2020 revenue.

Given the effects of the pandemic and Twitter's ability to manage them to deliver revenue and user growth in 2020, investors likely believed the company would carry the momentum into the new year -- as the share price certainly reflected. However, after digesting the first-quarter results, it's clear Twitter's medium-term targets might be set a little too high.

For the company to steady the ship, it will need to sustain its user growth and monetize them quickly to support the top-line expansion needed to double revenue in just a few years. Otherwise, the stock could be set for a period of underperformance relative to the broad market.