Please ensure Javascript is enabled for purposes of website accessibility
Log In Help Join The Motley Fool
Free Article Join Over 1 Million Premium Members And Get More In-Depth Stock Guidance and Research
By Will Healy - May 11, 2021 at 9:46AM

The industry's dependence on a geopolitically vulnerable island nation should concern all chip investors.

In recent years, the loss of its technological lead in semiconductor chip design and manufacturing has come to define the plight of Intel (INTC 1.46%) stock. Chip designs from companies like Advanced Micro Devices (AMD 2.76%), Apple, and NVIDIA (NVDA 4.28%) are beating the longtime tech darling at its own game, and its stock performance has lagged its rivals as a result. For some, Intel's comeback looks impossible.

However, CEO Pat Gelsinger appears intent on reclaiming Intel's technological lead and eventually its industry lead, and some recent national security threats faced by Taiwan Semiconductor Manufacturing (TSM 1.50%) could play a key role in that effort.

The effects on the chip industry

The threat of a Chinese invasion of Taiwan has received increasing news coverage in recent weeks following reports of rising concerns from some U.S. military officials. Chinese President Xi Jinping said in 2019 that Taiwan "must and will be" reunited with the People's Republic. According to Newsweek, Taiwan's intelligence agency has become more fearful lately of such a prospect as Xi faces reelection in 2022. 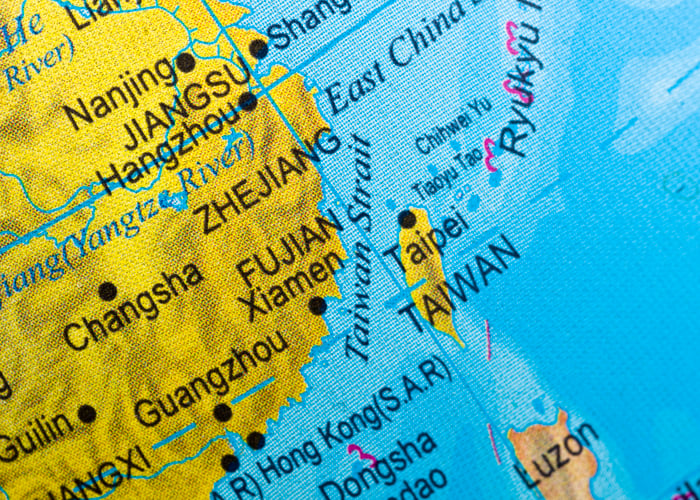 From the perspective of chip stock investors, this threat from mainland China highlights TSMC's most significant vulnerability. AMD, Apple, NVIDIA, and others depend on TSMC for at least part of their chip production. While Intel has sometimes contracted with TSMC on some chip production recently, it has historically designed and produced all of its own semiconductor chips.

Tech Centurion reported that TSMC built a technological lead over Intel and Samsung based on achieving a higher level of transistor density. Transistor density pertains to the number of transistors that can fit on a single chip. This technological advantage likely explains why TrendForce estimates that TSMC now claims 56% of the global foundry market. If one includes Taiwanese peers United Microelectronics, PSMC, and VIS, Taiwan-based companies hold 66% of that current market share.

For TSMC, most of its production also occurs in its home country. Taiwan is home to 14 of its 17 fabs, and two of the other three are in China. TSMC has begun construction on an additional fab near Phoenix, Arizona. However, that fab will only produce 240,000 wafers per year, accounting for less than 2% of the 12.4 million wafers TSMC manufactured in 2020.

Intel's Gelsinger weighed in on the topic earlier this month in an interview with CBS's 60 Minutes. He discussed the implications of China invading Taiwan and taking over TSMC. Gelsinger pointed out that Asia makes 75% of the world's chips, while only 12% of semiconductor manufacturing occurs in the U.S. According to the Congressional Research Service, 20 fabs currently operate in the U.S., eight of which Intel owns.

To this end, Intel has lobbied the U.S. government for subsidies to bring some of this manufacturing back to the U.S. The White House has responded with a proposed $50 billion industry subsidy, which President Joe Biden will incorporate into his proposed infrastructure plan. Since Intel is the largest owner of U.S.-based fabs, it would likely receive the largest benefit from such an outlay.

Judging by the behavior of Intel stock, investors seem to have focused heavily on Intel's lackluster financials. In 2020, revenue increased 8% from year-ago levels, though GAAP net income fell 1% during that period amid rising tax and interest expenses.

Still, that boost proved temporary as first-quarter 2021 revenue slipped by 1% year over year. GAAP net income for the quarter declined 41% as the company took a hit of just over $2 billion in restructuring charges.

Investors sold off Intel stock following its first-quarter news, and now, Intel stock price is down about 2% from where it stood one year ago. 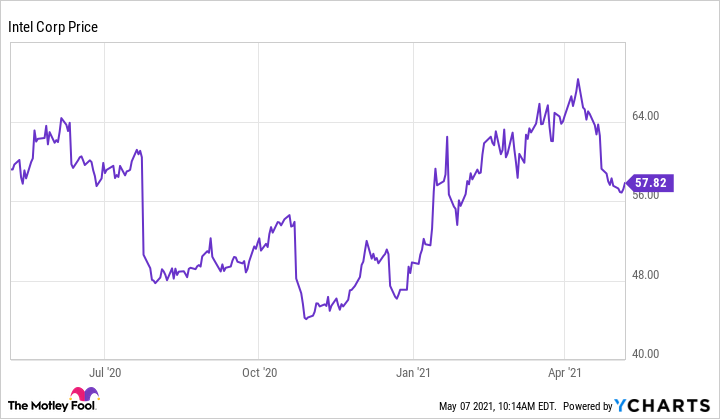 Intel's valuation has followed these financials. It currently sells for about 13 times its earnings. This dramatically lags AMD's price-to-earnings ratio of about 34, NVIDIA's 86 earnings multiple, and even the valuation of TSMC, which sells for about 36 times its current profits.

Implications for Intel and its peers

If judging by financials only, the revenue and profit growth numbers appear to explain why Intel sells for such a low multiple. However, with Intel seeming to trade only on financials, its low valuation probably does not reflect the advantages of owning fabs within the U.S. Moreover, the multiples for AMD, NVIDIA, and TSMC do not seem to reflect the tremendous vulnerabilities that a possible Taiwan invasion poses.

Perhaps China will invade Taiwan soon, or maybe it will not seize the island nation at all. Still, this threat has become increasingly concerning. Given the lack of control investors and industry leaders have under such a circumstance, investors may need to rethink the valuations of Intel and chip stocks in general.