Please ensure Javascript is enabled for purposes of website accessibility
Log In Help Join The Motley Fool
Free Article Join Over 1 Million Premium Members And Get More In-Depth Stock Guidance and Research
By Evan Niu, CFA - May 12, 2021 at 10:00AM

Lucid Motors continues to make steady progress toward the start of production for its Air sedan. The electric vehicle (EV) maker's merger with special-purpose acquisition company (SPAC) Churchill Capital IV (CCIV) is also expected to close this quarter. Lucid CEO Peter Rawlinson had an interview on CNBC earlier this week to discuss the company's prospects. 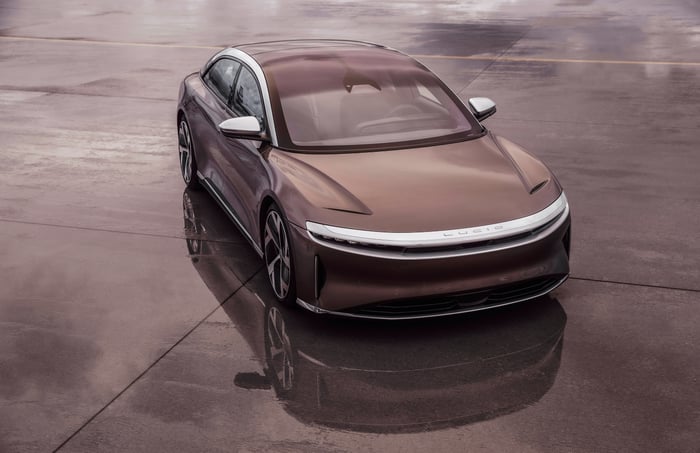 Rawlinson noted that Lucid is making progress on three key fronts: The manufacturing facility in Arizona is up and running, the company is improving quality for the Air every day, and Lucid is expanding its sales and service network ahead of the Air's launch. There are currently six Lucid studios open, with four more locations expected to open soon.

When pressed about whether Lucid is on track to manufacture and deliver over 20,000 vehicles in 2022, Rawlinson said the company was "on track" for its plan but demurred slightly. The chief executive also reaffirmed Lucid plans to deliver at least 577 vehicles this year. These forecasts are not new -- the projections were included when the SPAC confirmed its merger with Lucid in February -- but Rawlinson remains confident in Lucid's ability to achieve those targets.

Keep in mind that the Lucid Air Dream Edition that starts around $170,000 is already fully reserved, and the company previously said it planned to produce approximately 500 units of that trim. The vast majority of Air production in 2021 will be for the Dream Edition, and revenue this year is expected to be around $97 million.

Some investors are reading too deeply into Rawlinson's comments around Lucid's 2022 projections, or lack thereof. It's worth noting that Lucid will expectedly face meaningful execution risk as it approaches its automotive production ramp, a notoriously challenging endeavor for any new entrant to the auto industry.

Additionally, regulators have been increasingly scrutinizing the ambitious projections that SPACs release when they announce a target to merge with. The ability to offer lofty forecasts is one unique characteristic of SPAC mergers (companies going public via traditional IPOs are prohibited from doing so).

On top of that, Lucid just hired a new CFO, Sherry House, who may be reviewing the forecasts to ensure that they are achievable or preparing clearer disclosures due to the tense regulatory landscape that SPACs are facing. These are all potential reasons why Rawlinson didn't elaborate further.

Lucid's projections are undoubtedly very ambitious, calling for vehicle deliveries of over 250,000 in 2026 that could translate into nearly $22.8 billion in revenue that year.