Please ensure Javascript is enabled for purposes of website accessibility
Log In Help Join The Motley Fool
Free Article Join Over 1 Million Premium Members And Get More In-Depth Stock Guidance and Research
By Courtney Carlsen - Updated May 14, 2021 at 3:49PM

This life insurer has increased its dividend payout 38 years straight, and should see stronger growth as we emerge from the pandemic.

If you're a dividend investor, nothing makes you happier than a company that raises its dividend annually.

One company that has made its investors happy for years is Aflac (AFL 1.36%). Aflac's business model keeps its earnings stable, and its commitment to raising its dividends annually is noble. Despite the pandemic's impact on its business, the insurer raised its dividend in 2020 for the 38th year straight. This feat gives Aflac Dividend Aristocrat status, a title given to companies in the S&P 500 that have increased dividends for at least 25 years in a row. With a dividend yield near 2.4% at Friday's prices, Aflac is a company that income investors should know.

As a specialist in supplemental insurance that relies on employers for much of its business, Aflac struggled during the early stages of the pandemic, as U.S. unemployment surged to nearly 23 million. Last year, Aflac saw new sales decline by 30.8% in its U.S. division and another 36.2% in Japan.

However, despite the decline in new sales, Aflac's revenue dropped by only 0.7% last year. How is this possible? Premiums persistency, or the total amount of premiums in force by the end of the period. In life insurance, this is a good barometer of customer retention, because it shows how many customers maintained coverage throughout the year.

Persistency was steady in the first quarter, with the company's Japan and U.S. segments reporting premium persistency of 95% and 80%, respectively. A strong persistency ratio is a good sign that an insurer's revenue will be stable, and for a company making consistent dividend payments, high premium persistency is exactly what investors want to see. 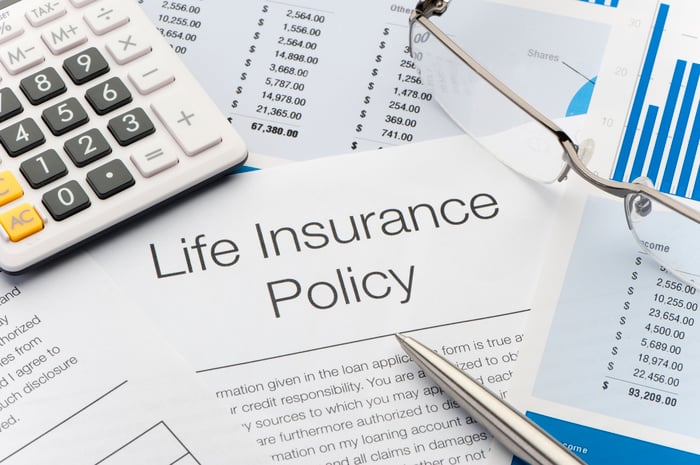 Demand should pick up in the next couple of years

Aflac posted a solid quarter as a drop in claims outpaced a slowdown in premiums growth. Diluted earnings per share were $1.87, up nearly 140% from the same quarter last year. Investment income was up $21 million, or 2.3% from last year, while investment gains were $307 million, a big improvement from last year's investment loss of $463 million. Net premium income dropped off slightly by $88 million, but was more than offset by a $204 million drop in net benefits and claims paid out during the quarter.

The pandemic continued to hurt new sales in the first quarter. New sales in the U.S. were down 22.1% from last year, while sales in Japan were down 0.2%. However, CEO Daniel Amos expressed optimism about the improving conditions coming in the second half of the year.

Amos has reason to be optimistic. In a November 2020 report, research and consulting firm LIMRA projected life insurance policy growth would rebound in 2021 and accelerate back to pre-pandemic levels in 2022. An even better sign for Aflac is the increased awareness of the importance of life insurance. LIMRA said 6 in 10 Americans said the pandemic raised their awareness about the need for life insurance, and 29% said they are more likely to buy life insurance within the next year.

Another reason to like Aflac is that it would benefit from an inflationary environment. Long-term interest rates tend to rise in these environments, which would boost investment income for insurers like Aflac. Last year and in the first quarter this year, the company generated 16% of its revenue from investment income.

Strong capital management, steady revenue, and a dividend you can trust

Aflac places a high degree of importance on maintaining strong capital ratios with prudent liquidity and capital management. That's why it has been able to increase its dividend for 38 years straight.

A positive sign for investors is Aflac's payout ratio, the metric used to measure the sustainability of a stock's dividend payments. A ratio above 100% means the company is paying out more than it earns, while a payout ratio of 50% or lower is ideal. Aflac's 10.4% payout ratio is a great sign of the company's ability to maintain and increase dividend payouts going forward.

Aflac's status as a Dividend Aristocrat coupled with its customer retention are good signs for the insurer's stability. This stability, combined with the increased demand for life insurance this year going into next year, along with a potentially higher interest rate environment, make Aflac a dividend stock worth further consideration for your portfolio.