Please ensure Javascript is enabled for purposes of website accessibility
Log In Help Join The Motley Fool
Free Article Join Over 1 Million Premium Members And Get More In-Depth Stock Guidance and Research
By Courtney Carlsen - May 15, 2021 at 7:01AM

Despite gaining more than 50% over the past few months, Allstate's stock still looks super cheap.

Markets are quite efficient. However, sometimes companies will fly under the radar at a valuation that is head-scratching. Temporary conditions can result in companies getting beaten down, but when those conditions regress, the prospects for future growth can be strong.

One undervalued company going unnoticed right now is Allstate (ALL 1.10%). Amid the pandemic last year, Allstate benefited from fewer drivers on the road. However, its premium growth was minimal, and it had a hard time generating decent investment income due to the low interest rate environment.

The insurer should benefit as more drivers hit the road and as interest rates increase in the coming years. Allstate has also undergone a facelift in the past year, selling off less profitable businesses while adding others in an effort to grow its market share. 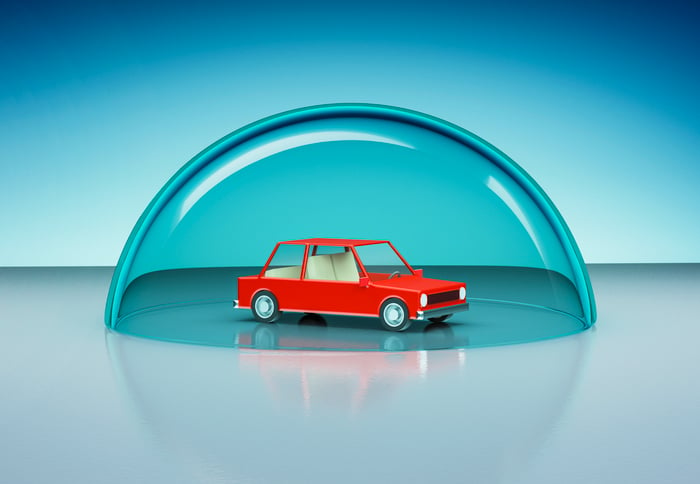 The pandemic cast a shadow on the industry

Allstate traded at bargain-bin prices last year. At one point, the insurer's stock traded near a price-to-earnings (P/­E) ratio of 6. The stock was so cheap because of ultra-low interest rates combined with an uncertain outlook for the insurance market.

While fewer drivers on the road resulted in fewer claims, it also meant lackluster premium growth. Last year, written premium growth was nearly flat, up less than 1%. Allstate also saw its life insurance division struggle with growth, due to increased claims from increased deaths due to COVID-19. In 2020, the company reported a $159 million net income from its life insurance segment, a decrease of nearly 36% from the year before.

Not only that, but with interest rates at record low levels, it was difficult for the insurer to generate decent returns on its excess capital. As a result, net investment income declined last year by 9.7% to $2.85 billion.

The stock is cheaper than it appears

Allstate's P/E ratio around 12 at Friday's prices makes it more expensive than its closest competitor, Progressive, which sports a P/E ratio under 10. However, Allstate's P/E ratio is higher due to the company's sale of its life insurance businesses in the first quarter, which it sold for a loss to Blackstone Group and Wilton Re for $3 billion total.

The sale of these businesses resulted in a $3.8 billion loss from discontinued operations on Allstate's books in the first quarter. The sale resulted in a loss of $12.38 per diluted share, and resulted in a total diluted loss per share of $4.60 in the quarter. Backing out this loss gives Allstate a trailing-12-month P/E ratio around 6, making the insurer look ridiculously cheap.

Allstate's exit of its life insurance businesses was due to payouts stemming from the COVID-19 pandemic. CEO Tom Wilson stated that the company's ultimate focus is to eliminate less profitable operations while directing its attention toward what it does really well -- writing auto and homeowners insurance policies.

To carry out this mission, the company also acquired National General for $4 billion last July and closed this transaction in early January. The acquisition boosts Allstate's market share by 1%, bringing its total to 10%.

Cheap valuation and economic tailwinds should benefit the insurer

Despite the stock's 58% run-up since its recent lows in late October, Allstate is still undervalued, in my opinion. I like the company's acquisition of National General and its disposal of its less profitable life insurance businesses, as it allows the company to focus on its auto and homeowners insurance products. These strategic business moves, coupled with tailwinds from rising interest rates, make Allstate worthy of a higher valuation.

The Market Is Running From This Value Stock: Should You Buy It?