Please ensure Javascript is enabled for purposes of website accessibility
Log In Help Join The Motley Fool
Free Article Join Over 1 Million Premium Members And Get More In-Depth Stock Guidance and Research
By Cory Renauer - May 16, 2021 at 9:19AM

See how the smaller telehealth provider's first-quarter performance stacked up against the industry leader.

Do you enjoy carving hours out of your busy day to get a few minutes of face time with a doctor? If you don't, you're not alone. If we've learned anything over the past year and a half, it's that Americans are hungry for medical services that can be provided without the rest of the doctor's office experience.

Last September, Amwell (AMWL 4.71%) attracted a whopping $742 million in a highly successful IPO because it seemed like a strong contender in the race to dominate a still-fragmented market led by Teladoc Health (TDOC 6.72%). 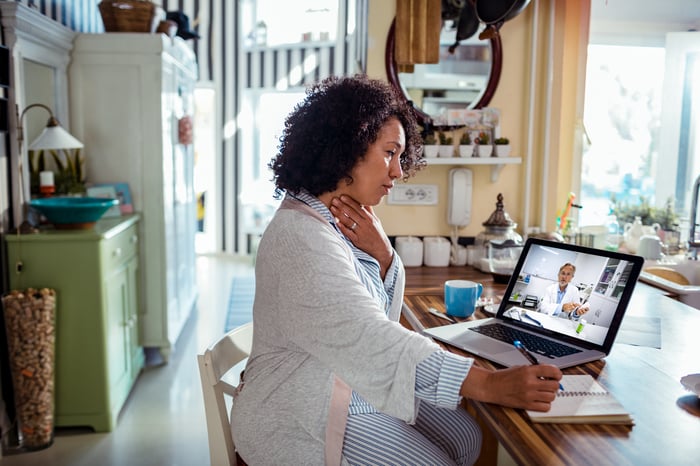 The adoption of long-distance medical services hasn't slowed down since Amwell's stock market debut. Unfortunately for Amwell, the number of well-funded companies trying to tackle the market leader is on the rise too.

Shares of Amwell have lost nearly half their value since the company's IPO because investors are worried it won't be able to carve out a large share of the space currently led by Teladoc Health. Now that both companies have reported first-quarter earnings, we can see if Amwell's gaining on the leader or falling further behind.

When it comes to overall usage, Amwell's still far behind Teladoc, but it's gaining fast. In the first quarter of 2021, Amwell hosted 1.6 million visits on its telehealth platform. That was a 120% gain over the previous year period, but still just half as many as Teladoc Health. During the same period, the industry leader facilitated 3.2 million visits, which was 56% more than a year earlier.

Both companies want reliable cash flows that come from a growing base of subscribers who eventually pay for add-on services. To this end, Teladoc is clearly in the lead with subscription access fees that more than tripled year over year to reach $388 million during the first quarter. Total subscription fees collected by Amwell in the first quarter grew just 13% year over year to $24.6 million.

Both companies are still reporting significant net losses, but just one of them is marching toward profitability. Once you adjust for non-cash expenses unlikely to be repeated, Teladoc Health reported adjusted earnings before interest, taxes, depreciation, and amortization (EBITDA) that reached $57 million in the first quarter. On the same yardstick, Amwell lost $26 million during the first three months of 2021.

Thanks to a successful IPO last year, Amwell finished March with $996 million in cash on its balance sheet. This is a nice cushion, but it isn't enough to win a race to the bottom with a growing list of well-funded competitors in the telehealth space.

Teladoc Health had 51.5 million paying subscribers at the end of March, but it might not be Amwell's largest competitor for much longer. One of America's largest healthcare benefits managers, Cigna (NYSE: CI) recently acquired MDLive. This was already one of the largest privately held providers of telehealth services before Cigna came along. Now it has contracts that cover over 60 million lives.

So far, Amwell hasn't shown strong signs it can differentiate itself in the increasingly crowded market for telehealth services. Until we see subscription growth and margin improvements that suggest Amwell can rise to the top of this space, investors should keep looking for better healthcare stocks to buy.