Please ensure Javascript is enabled for purposes of website accessibility
Log In Help Join The Motley Fool
Free Article Join Over 1 Million Premium Members And Get More In-Depth Stock Guidance and Research
By Dan Caplinger - Updated May 17, 2021 at 4:59PM

Find out why investors are more excited than ever about these two businesses.

The stock market had a tough day on Monday, and once again, negative attention centered on the Nasdaq Composite (^IXIC 0.00%). The index's 1% drop as of 2:15 p.m. EDT was bigger than what other major market benchmarks faced, in part because the appetite for high-priced stocks seems to have waned considerably over the past few months.

However, a couple of Nasdaq stocks were big winners on Monday, and they both have innovative business models that could have a positive influence on the world. AppHarvest (APPH 4.96%) and Summit Therapeutics (SMMT) had notable gains to start the week. Below, we'll go into the details to see why investors are paying close attention to these two Nasdaq winners.

Investors are feeding on this stock

Shares of AppHarvest had a solid gain of more than 8% on Monday afternoon. The stock only recently came public through a merger with a special purpose acquisition company, and this was the first chance that investors had to see the sustainable-farming company's full potential. 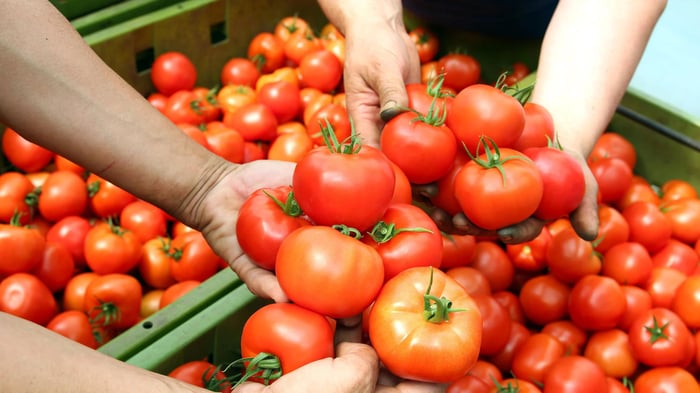 AppHarvest released its first-quarter financial report on Monday, and shareholders liked what they saw. The company posted $2.3 million in revenue in its first operational quarter, selling 3.8 million pounds of tomatoes from its first greenhouse facility in Kentucky. AppHarvest posted considerable losses, as expected, but it has high hopes for the future.

In particular, AppHarvest said that it had fully planted its 60-acre facility as of the first week of May, which should lead to capacity harvests for the foreseeable future as indoor farming makes all-year growing possible. The company has seen strong demand from customers like grocery-giant Kroger and fast-food restaurant chain Wendy's and anticipates more interest as it develops additional facilities.

AppHarvest won't be profitable in the near term, but shareholders are still excited about its growth potential. With sustainable farming potentially making it possible to feed an increasingly hungry world, the stock is an interesting way to invest in agriculture.

Meanwhile, Summit Therapeutics did even better, as its stock soared 22%. The developmental-stage biopharmaceutical company's financial report didn't feature very attractive numbers, but investors are optimistic about the progress it has made recently.

Summit's financials were predictably ugly. Revenue was just $192,000, leading to losses of $17.5 million. Summit is burning cash to conduct clinical trials, and until one of the treatments in the company's pipeline pans out, investors can expect those losses to continue. However, the company noted that CEO and majority shareholder Robert Duggan provided an additional $55 million in debt financing during the first three months of 2021, helping to boost Summit's cash levels back above the $100 million mark.

Moreover, Summit had promising news in its business update. Phase 3 trials for its ridinilazole antibiotic are ongoing, with support from the federal government's Biomedical Advanced Research and Development Authority. Moreover, the company just launched a new study for adolescents, hoping to establish a favorable safety profile as a complement to its concurrent phase 3 program.

Summit's share price has been volatile as investors try to determine whether the company will find success with its clinical program. As with most companies in the industry, Summit could see either massive upside or suffer big losses depending on what happens with ridinilazole and the other candidates in its pipeline.