Please ensure Javascript is enabled for purposes of website accessibility
Log In Help Join The Motley Fool
Free Article Join Over 1 Million Premium Members And Get More In-Depth Stock Guidance and Research
By Rekha Khandelwal - May 17, 2021 at 8:17AM

The fuel cell maker's stock has historically been volatile.

A global push toward clean energy sources has brought clean energy and related technology companies in the limelight. Fuel cell maker Plug Power's (PLUG 6.49%) stock price rose ten-fold last year on the back of investors' euphoria for its promising hydrogen fuel cell technology. But this year, the stock reversed course in a big way -- it's now 68% off its 2021 peak. Wall Street analysts' average price target for Plug Power now implies a 134% rise from its current levels over the next year. Here's why that forecast looks far too optimistic.

In its more than 21 years of operations as a publicly traded company, Plug Power has never turned a profit. It has also never generated positive EBITDA, and has burned through a significant amount of cash in its history. 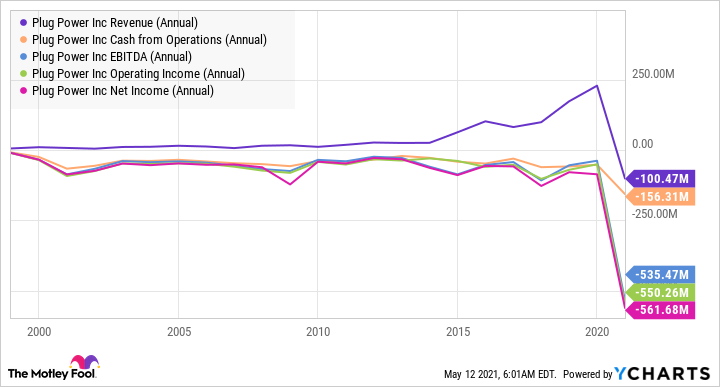 What's more, its key financial metrics are not even trending in the right direction. Operating income and cash from operations took major dives last year. The only metric on which Plug Power has shown improvement is gross billings. But, in the absence of profits or progress toward profits, increasing sales does not make much sense.

It's surprising that Plug Power has managed to survive so long while consistently making losses. But the company has maintained its ability to tap both debt and equity sources for the funds it requires to carry out its operations. 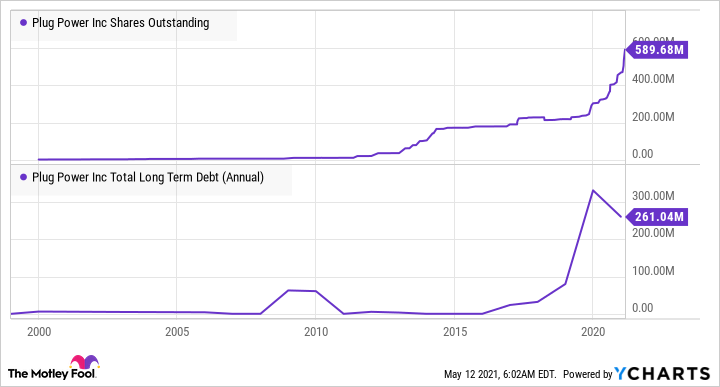 Both its outstanding share count and its debt have risen significantly over the years. Indeed, the number of Plug Power shares outstanding more than doubled in the last two years as the company issued new shares rapidly to take advantage of its high stock price.

The stock, which was trading at around $4 per share a year ago, rose steadily to more than $73 in January 2021, thanks to the company's announcement of major growth plans. In September, Plug Power management came out with a lofty target of $1.2 billion in gross billings by 2024. Moreover, the company announced that it expects to generate $250 million in adjusted EBITDA by that year.

Plug Power has since raised its 2024 gross billings target to $1.7 billion, though it hasn't said much about its long-term EBITDA outlook. In an update released on Monday, the company reiterated that gross billings target, but said nothing about EBITDA. Plug Power's plan to achieve positive EBITDA, thus, looks hazy at best, and completely unrealistic at worst.

What's more, Plug Power has a history of failing to meet its EBITDA guidance. Both the company's 2020 annual report and its first-quarter 2021 report have been delayed as it prepares to restate its previously issued financial statements. All of these issues are red flags that investors ought to keep a close eye on.

Fuel cell technology remains promising. It can be a great way to generate and store energy in an environmentally friendly way. However, it hasn't been able to catch up to other available green energy alternatives on the cost front. The adoption rate of fuel cells in the transportation sector has been slower than its adoption of lithium-ion batteries.

Though the costs of fuel cells have fallen significantly over years, they are still not financially competitive. Those falling costs are mostly associated with rising sales and marketing expenses and lower product prices, which suggests the extent of the competition that Plug Power faces -- both from green alternatives to fuel cells and from other fuel cell companies.

Considering the above factors, Wall Street's share price target of $55 for Plug Power looks optimistic. It implies a price-to-sales ratio of 68 based on the company's expected sales of $475 million in 2021. That's quite high for a company that hasn't managed to become profitable in more than two decades and that faces significant risks. Further, even with high revenue growth, Plug Power's margins could remain strained due to intense competition. So, even if it does reach profitability, such a premium valuation looks unjustified.

Overall, investors should consider the risks involved for this company before getting too attracted to the significant upside that analysts are forecasting for Plug Power stock.