Please ensure Javascript is enabled for purposes of website accessibility
Log In Help Join The Motley Fool
Free Article Join Over 1 Million Premium Members And Get More In-Depth Stock Guidance and Research
By Lawrence Rothman, CFA – May 18, 2021 at 12:30PM

One company is the favorite.

Is it better to go with an established company or a relative upstart? That is the essential question facing investors choosing between Walmart (WMT -0.93%) and Beyond Meat (BYND -5.55%).

Both have merits, but stock market investing involves making choices. After all, you want to achieve your financial objectives and pick the best stock for your portfolio.

It's time to see which stock makes the grade. 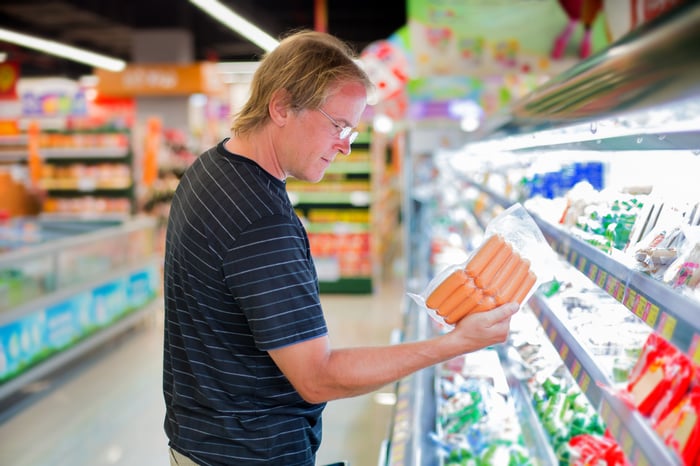 Beyond Meat continues to capitalize on the trend toward plant-based meat products. It makes food that looks and tastes like animal products, but the company's fare has nutritional and environmental benefits. Beyond Burger is its main product, but it also makes sausages, meatballs, and chicken, among others.

Beyond Meat sells its goods at popular retail stores such as Costco and restaurants. In fact, earlier this year it inked a three-year deal with McDonald's to supply it with plant-based burgers and explore developing other products together. At the same time, it made an agreement with Yum! Brands to help create protein-based menu items.

As its products gain in popularity for both home and restaurant consumption, Beyond Meat's revenue has skyrocketed, increasing more than four-and-a-half times in just two years to $406.8 million in 2020. However, profitability hasn't followed, with losses widening from $29.9 million to $52.8 million during that time.

First-quarter 2021 revenue only grew by 11.4% to $108.2 million, held back by its foodservice business as the company blamed the COVID-19 pandemic. The results disappointed analysts and investors, but with COVID-19 cases declining and restaurants opening for longer hours, revenue should recover in the coming months.

Opening its first discount store about six decades ago, Walmart is the world's largest retailer, serving 240 million customers weekly. It remains true to its low-cost, low-price business, striking a chord with customers.

Combined with its value offerings, Walmart remains competitive with online stores such as Amazon by investing in technology to offer customers convenient shopping. This has resulted in easier shopping and faster delivery. Last year, it launched Walmart+, its subscription service that offers delivery, gas discounts, and faster checkouts at the physical stores for an annual fee.

For this year, management expects a low-single-digit percentage gain in sales after excluding sold business. It anticipates operating income will stay the same or increase slightly. But this is due to higher expenses as it increases investments in automation and supply chain capacity, which will ultimately allow Walmart to stay competitive with nimble online rivals.

Beyond Meat may prove a big winner, but with competitors potentially eating into its market share and struggling foodservice sales, this is the riskier choice.

Walmart has proven itself over the years, and it's not standing pat, either. It continues to look toward the future, allowing it to remain a relevant company in a fast-changing retail industry. That makes Walmart my investment choice.