Please ensure Javascript is enabled for purposes of website accessibility
Log In Help Join The Motley Fool
Free Article Join Over 1 Million Premium Members And Get More In-Depth Stock Guidance and Research
By Jeff Little - May 18, 2021 at 6:20AM

It might be tough for HCA Healthcare to maintain this speed forever.

One company that has kept up a strong pace amid the chaos of the past year is HCA Healthcare (HCA -0.09%), a leading provider of general healthcare services. HCA Healthcare boasts over 2,000 care sites and provides 6% of all inpatient hospital services in the U.S.

The stock share price has made a consistent climb from a (roughly) one-year low of $89 in March of 2020 to $208 as of this writing. So the question is, how did HCA stock not only survive but thrive? And can it keep up its winning pace? The company has done quite a few things right, like being highly engaged with people and communities, and taking action where it matters most. 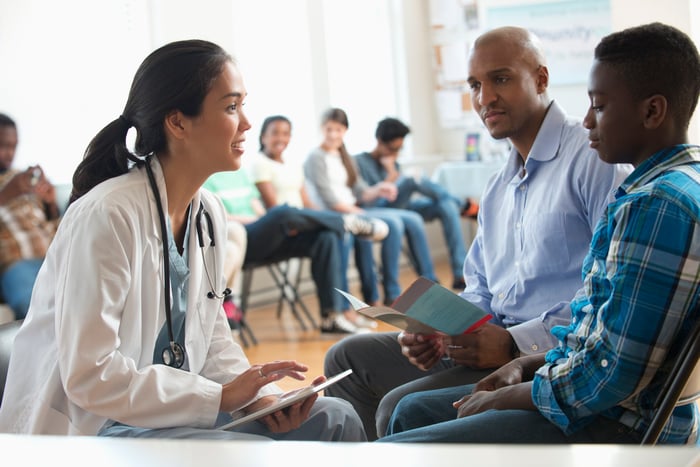 Healthcare beyond the hospital

In the face of challenges brought on by the pandemic, HCA has treated more COVID-19 inpatients than any other healthcare system in the U.S. It also continued its community outreach by donating over $1 million in relief and by playing a key role in a collaboration program with the American Hospital Association, in which HCA offered 1,000 ventilators to those in need during the crisis.

HCA also made its presence felt outside of hospitals and urgent care centers by focusing on schools and communities. The company teamed up with EVERFI, an international technology company driving social change through education, to develop and offer courses in middle and high schools as part of Mental Illness Awareness Week. With one in six kids ages six to 17 experiencing a mental health disorder each year, it is imperative to provide educators with the skills they need to cope with the challenge of students' mental health issues. These courses are designed to do just that, in 105 school districts across six states in various regions of the U.S.

HCA is also helping people combat an increase in drug use as a result of the impacts of COVID-19. In keeping with its commitment to helping both communities and individuals, HCA hosted the 2020 "Crush the Crisis" Opioid Take Back Day. This event, involving 95 HCA Healthcare facilities, collected more than 13,500 pounds of expired, unused, or unwanted prescription medications. This total was twice the amount from the previous year. Overall, 9.3 million doses of medication were eliminated from potential misuse.

These actions go a long way toward caring for people beyond the hospital, and should speak volumes to investors as to the integrity and approach of the executive team in managing operations. As evidence of how successful this approach has been, LinkedIn named HCA Healthcare as a 2021 Top Company. It was also recognized for the 11th time as one of 2021 World's Most Ethical Companies by Ethisphere, a global leader in defining and advancing the standards of ethical business practices.

Socially positive goals have translated into great financial results and returns for HCA investors. Since 2018, the company has experienced three consecutive years of increased revenue on an annual basis. The one noteworthy downside is that the increase in revenue has remained in single digits, and the amount of increase has wavered.

Earnings per share (EPS) have also seen an increase in two of the past three years, which included 2020 when EPS was up by 8.5% over 2019. For the recent quarter ending in March, earnings were up 145% year over year.

The growth in earnings was driven by a higher patient acuity -- the severity of illness and intensity of care required -- which resulted in lengthier inpatient stays at an increased rate of 6%. This led to 3% higher revenue per admission, as well as improved payer mix between commercial insurance and government programs. The company also benefited from a slight increase in outpatient surgeries beginning in March 2021.

HCA Healthcare is a profitable company providing integral healthcare services, with a management team that makes moves to generate revenue in good times and bad, while practicing excellent community outreach.

It has also paid out quarterly dividends in 12 of the past 14 quarters, missing only two during 2020, with a current annual dividend of $1.92. By comparison, the average S&P 500 stock yields about 1.39%. Share returns have also been strong. HCA has bested the one-year returns of the INX S&P 500 index and competitors -- Universal Health Services, and Encompass Health -- by more than 50% on average.

As we look toward the mid-point of the year, guidance for full-year 2021 is upbeat. The company is estimating a year-over-year 6% increase in revenue, based on a $54.5 billion mid-range point, and a 15% increase in EPS, based on an average of $12.60 per diluted share.

As participants in this ongoing pandemic marathon tire, HCA has shown stamina and the ability to press the pace at times. But life is a marathon, and successful investing takes a long-term approach. It might be time to consider making room in your portfolio for a company like HCA, which is poised to keep up its front-runner pace.