Please ensure Javascript is enabled for purposes of website accessibility
Log In Help Join The Motley Fool
Free Article Join Over 1 Million Premium Members And Get More In-Depth Stock Guidance and Research
By Dave Kovaleski - May 19, 2021 at 6:35AM

This bank is firing on all cylinders, and its stock price is up 82% year to date.

Signature Bank (SBNY -0.06%) is not a household name among investors, but it has put up consistently strong numbers over the past decade-plus that shouldn't be overlooked. Over the past 10 years, it has been one the five best-performing bank stocks on the market, and this year its price is up 82% through May 14.

Signature is off to a great start in 2021. But with the economy expected to grow at a rapid pace over the next couple of years, combined with some strategic moves Signature's leadership has made, the bank is in a position to see continued growth. Here is why you should consider buying this bank stock now before it gets on Wall Street's radar. 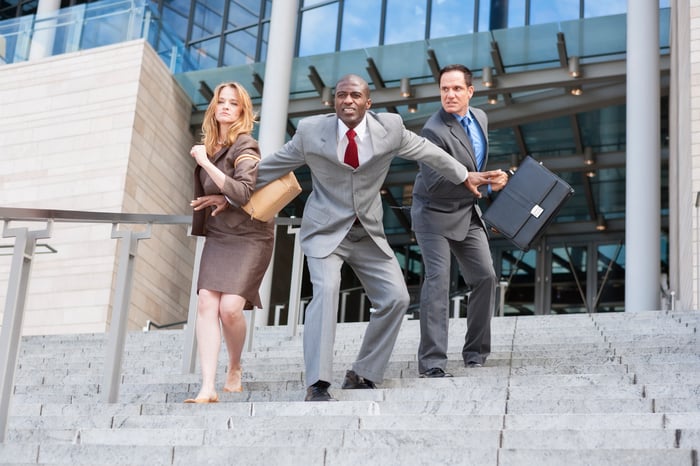 Signature Bank, based in New York, offers private banking services to high-net-worth individuals, their businesses, and their executives or senior managers. The bank, with about $85 billion in assets, does not offer any retail banking services. It has 37 private client offices, mostly in the New York City area, but with offices in Connecticut, California, and North Carolina as well. Last year, it made a major move to expand its presence in California's financial centers, opening four private client offices in Los Angeles, complementing its office in San Francisco.

The bank fared relatively well during the pandemic as the high-net-worth clientele weren't as financially impacted as others, leading to lower provisions for credit allowances and higher earnings than most banks. The stock price ended 2020 up 1%. Signature finished the year strong with a record $173 million in net income in the fourth quarter, a 17% increase year over year. Net interest income increased 17% in the fourth quarter, fueled by record loan and deposit growth in the quarter.

"It's clear that the bank is firing on all cylinders," President and CEO Joseph DePaolo said on the first-quarter earnings call.

The bank is well run, with an efficiency ratio of 37.9% in the first quarter down from 39.7% a year ago, and a return on average common equity of 13%. Its cash balances rocketed to over $19 billion, up from $12 billion a year ago, due to its strong deposit flows. This efficiency has enabled the bank to invest in its growth, expanding into money centers in California, as mentioned, and launching new business lines.

One of the newer initiatives is its proprietary, blockchain-based digital payments platform Signet, which launched in 2019. Signet allows customers to make real-time payments at any time. Last year, the platform was integrated with the Fireblocks Network, which enables clients to move their money more safely, efficiently, and securely. Signature has also made a sizable investment in digital banking operations overall, which grew deposits by $4.4 billion in the first quarter alone.

It is also preparing to launch a mortgage warehouse lending business to complement its specialized mortgage business. The firm recently hired Ken Logan, a 35-year industry veteran who formerly worked at Wells Fargo, to lead this team. In addition, it rolled out a Small Business Administration loan origination business, led by George Glines, formerly of the Bank of the West.

"This business was very strategically important to us and to our growth initiatives on the West Coast. The cost of real estate often makes it prohibitive for our businesses to buy their real estate, so they really need that government helping there and we're very happy to be involved in that space," Eric Howell, executive vice president at Signature said on the earnings call.

Overall, the bank anticipates $4 billion to $8 billion in overall loan growth in 2021.

Finally, what has set Signature apart over the years is its single point of contact service model, where customers work with their own banker for all of their needs, no matter the service. The bank has won many awards over the years as the top private bank, including last year.

This is a bank that's been a consistent, efficient performer over the years and it has lots of growth potential. Its stock price is already up over 80% year to date but it still has room to run, so you may want to consider adding it to your portfolio before it goes higher.