Please ensure Javascript is enabled for purposes of website accessibility
Log In Help Join The Motley Fool
Free Article Join Over 1 Million Premium Members And Get More In-Depth Stock Guidance and Research
By John Ballard - May 19, 2021 at 7:30AM

EA expects a big hit to near-term profits after completing these acquisitions.

Deal-making activity has been heating up over the last year in the video game industry. Electronic Arts (EA 1.30%) recently joined the game in a big way. In separate deals this year, it acquired Glu Mobile and Codemasters for a whopping $3.3 billion combined.

As a result of the deals, EA in its fourth-quarter earnings report guided for lower profits in fiscal 2022 as it integrates the two companies into its operations. It makes you wonder about the value here, especially since Glu Mobile generated a significantly lower net profit margin than EA's own business last year. Is EA throwing good money after bad with these deals?

Here's a breakdown of what these two game companies bring to EA, and what management sees happening in the long run. 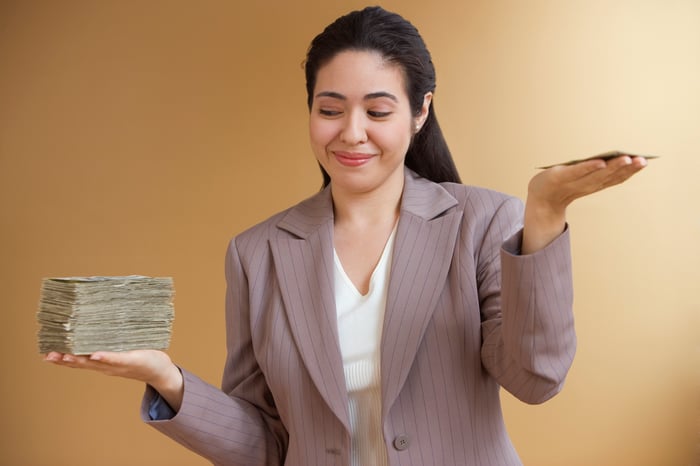 EA expects a big jump in bookings this year

EA is forecasting bookings (a non-GAAP measure of revenue) to jump 18% this year to reach a new record of $7.3 billion, largely reflecting the additions of Glu Mobile and Codemasters. But management also disclosed that organic growth, excluding the effect of acquisitions, will be positive for the year.

But profits will slip

EA expects operating cash flow, which shows the actual amount of cash the business is producing, to decline by 9.6% year over year to $1.75 billion. 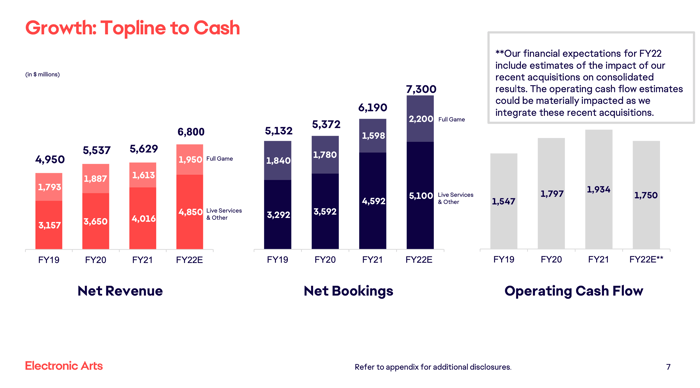 Management attributed the dip in operating cash flow to acquisition-related costs. It's also going to ramp up capital expenditures to $250 million, up from $140 million a year ago, which is partly due to new offices it is building around the world.

Management is focused on long-term value

In the corporate world of deal-making, there is often more value embedded in the nuances of these acquisitions than meets the eye.

For example, CFO Blake Jorgensen said they "took a very conservative posture" on forecasting the bookings contribution from Glu Mobile and Codemasters in the first year.

Most importantly, he said, "[W]e're not yet modeling any synergies from the two acquisitions."

Furthermore, Jorgensen added that they are not yet assuming any growth they expect as Glu Mobile continues to expand its portfolio of mobile titles and Codemasters taps EA's sports expertise to expand the audience for its racing franchises.

EA said it would share more details about the long-term benefits it expects from these deals later this year. But it's clear that there is more revenue and profits that management can squeeze out of these businesses than is reflected in fiscal 2022 guidance.

In November, Take-Two Interactive (TTWO 2.05%) initially offered nearly $1 billion to buy Codemasters. A month later, EA swooped in and offered $1.2 billion. EA had more to offer than just money. EA has a diverse roster of sports titles that can be cross-promoted with Codemasters' leading racing franchises, which include F1, Project CARS, and DiRT.

"[I] think we will be able to continue to grow these businesses and generate higher returns off the businesses than they have in the past," Jorgensen said.

Indeed, EA has a network of 500 million player accounts that Codemasters and Glu Mobile can leverage to expand the player base for their titles and grow their respective businesses.

EA expects to more than double its mobile business to $2 billion in annual net bookings within the next three years. For perspective, EA generated $783 million in mobile bookings in fiscal 2021. This will bring EA's mobile business on par with Activision Blizzard, which generated $2.1 billion from its King mobile segment in 2020.

EA might have gotten a bargain for Glu Mobile

Based on Glu Mobile's 2020 revenue of $540 million, EA paid four times sales, which is at the low end of what other video game stocks sell for on a price-to-sales basis.

Another way to look at the price it paid for Glu Mobile is that EA basically paid $2.1 billion to add an incremental $1.2 billion in revenue to its mobile segment over the next three years. That's a forward-looking price-to-sales ratio of less than two.

In the long run, I believe the chances are good EA's purchase price will look like a bargain. 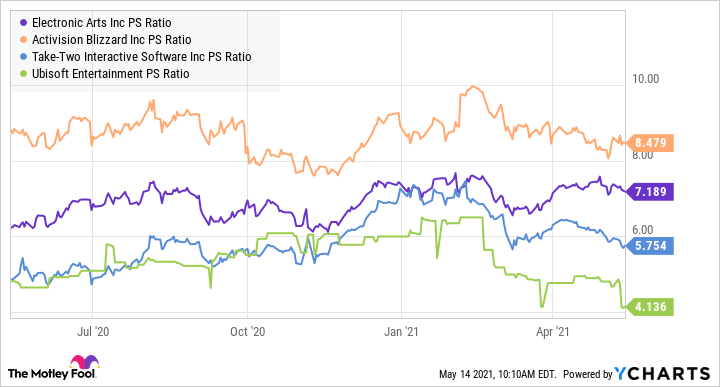 A key to unlocking this value will be improving Glu's profitability, but that should come as the business reaches more players through EA's player network and spreads more development costs across more users.

I'm willing to give EA the benefit of the doubt at this early juncture. Management has certainly made the right moves that have delivered tremendous returns to shareholders in recent years. The stock is up nearly 500% over the last 10 years.

Clearly, if management hits its growth targets with Glu Mobile and Codemasters, EA's growth prospects will be greatly improved. If EA's mobile business shows significant growth and improving profit contribution over the next few years, investors will likely reward EA with a higher stock price.