Please ensure Javascript is enabled for purposes of website accessibility
Log In Help Join The Motley Fool
Free Article Join Over 1 Million Premium Members And Get More In-Depth Stock Guidance and Research
By Taylor Carmichael - Updated May 20, 2021 at 3:58PM

These fast-growing companies are on sale right now.

All three of these businesses are hitting it out of the park right now. Upstart is the "slow" stock of the trio, delivering 90% year-over-year revenue growth in its most recent quarter. In Q1, Inari Medical's top line jumped by 113% from a year ago. And eXp World reported a 150% jump in revenues in its most recent quarter. Here's why these stocks are all on my buy list right now. 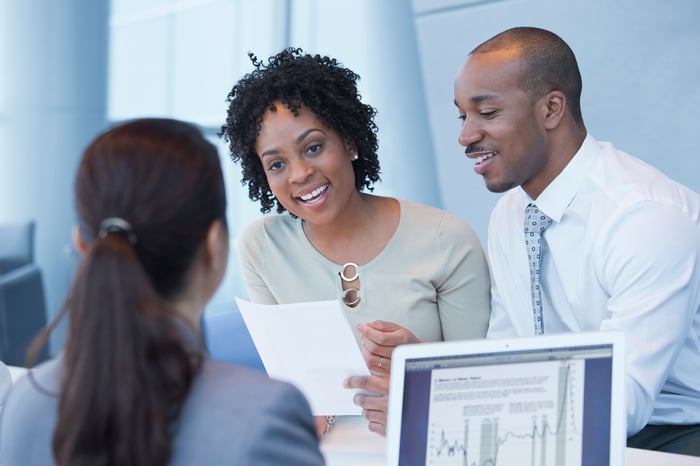 1. Upstart: This fintech will be huge

I'm very bullish on the future of artificial intelligence (AI) in most areas -- for instance, in assessing credit risk. And thanks to Upstart, the future is happening right now.

The credit report, with its "FICO score," was first devised in 1956 when Bill Fair and Earl Isaac devised a credit scoring system. Credit reports haven't changed much since then. People who manually assess your credit look at things like your payment history, debt burden, length of credit history, the types of credit you use, and recent searches of your credit score. Computers were made for this sort of work, and they do it a lot better than humans do. For starters, computers can analyze a lot more data points at once, and thus give superior predictions of actual credit risk.

Upstart was founded by three Google (Alphabet) employees who wanted to use AI to create a better, more accurate credit scoring system. The company's AI process looks at over 1,000 data points. Upstart takes no financial risks itself -- the actual loans are made by its banking clients. And Upstart has been wildly successful at finding subprime borrowers who are actually worth loan risks. That has made its banking clients very happy, and business has been moving at a brisk pace.

Upstart had $121 million in sales during Q1 2021, up 90% from a year prior. The company is projecting revenues of $600 million for the full year, up 157% from 2020. Upstart has already achieved profitability -- unusual for a tech company that's still in its hyper-growth phase. For these reasons, Upstart is worth investors' consideration, and shouldn't scare them away even while trading at over 30 times sales.

Inari Medical has made a medical breakthrough in removing clots from veins. It has the two best devices on the market for dealing with clots that cause deep vein thrombosis (DVT) and pulmonary embolisms (PE). Its main competitor, Penumbra (PEN 1.55%) specializes in removing clots from arteries. But that represents a different medical challenge than venous clots, which are much larger.

Inari built its two devices, the ClotTriever and the FlowTriever, from the ground up in order to deal specifically with clots in veins. The company estimates that the market for those devices represents a roughly $3.8 billion opportunity in the U.S. alone.

Unlike Upstart, Inari is a niche stock, and it's doubtful that it will ever become a mega-cap monster. On the other hand, a fast-growing medical device company that has made a major advance in a specialty area is an obvious acquisition candidate.

What's particularly exciting about Inari from a financial standpoint is all the recurring revenue it generates. Its medical devices are disposable. So every doctor who trains on the system creates a new future revenue stream. Once Inari achieves dominant mindshare among medical professionals for its devices, the stock should become a cash machine for investors.

One of my favorite stocks is eXp World, the company that is bringing the internet to the trillion-dollar real estate market. Companies like Zillow (Z -1.44%) and Opendoor (OPEN -4.60%) are trying to make buying a house similar to buying a stock -- something that is fast, easy, and can happen quickly, without the need for a broker to commission the sale. That's incredibly ambitious, and so far, their revenue growth is sputtering. Meanwhile, eXp World is using the internet to empower real estate brokers and help them expand their businesses. And the company's top-line growth is off the charts.

Zillow and Opendoor, with their iBuyer initiatives, are buying houses every quarter and (hopefully) selling them for a profit. eXp World has a similar initiative, Express Offers, with one major difference: It doesn't buy the houses. Instead, eXp World helps sellers field offers from multiple institutional buyers.

eXp World is a huge force in the real estate industry. In the first quarter, it sold 73,000 houses, while Zillow and Opendoor sold fewer than 5,000 combined. But eXp World reports a smaller revenue number because, for it, that metric doesn't represent the sales value of the houses. (Because of an accounting quirk, Opendoor and Zillow report all the houses sold as revenue to the company).

Zillow, unlike Opendoor, is not a pure iBuyer -- it has other revenue streams. But it's clear from these numbers that the iBuyer phenomenon is floundering right now, while eXp World is crushing it.

For those who have cash to invest, now would be a great time to buy shares of eXp World, Inari Medical, and Upstart. These companies are seeing amazing sales growth, and their stocks are a lot cheaper than they used to be.

Upstart Stock Downgraded -- Is It Time to Panic?

3 Breakout Growth Stocks to Buy for the Long Haul

5 of the Fastest-Growing Stocks On the Planet