Please ensure Javascript is enabled for purposes of website accessibility
Log In Help Join The Motley Fool
Free Article Join Over 1 Million Premium Members And Get More In-Depth Stock Guidance and Research
By Sushree Mohanty - May 20, 2021 at 7:19AM

This pot company's Q1 results show how it can thrive in 2021.

While the world still fights the coronavirus crisis, the pandemic-induced marijuana boom continues. After cannabis was declared an "essential item" in the U.S., sales at many cannabis companies spiked. The U.S. marijuana industry keeps flourishing, even with a limited legal market. Only a few states have legalized marijuana, while it remains illegal federally. But that hasn't stopped cannabis companies from showing extraordinary performance this year, thanks to pandemic tailwinds and the fact that ever more states are legalizing marijuana.

This is evident from Massachusetts-based Curaleaf Holdings' (CURLF 1.35%) first-quarter 2021 performance, reported on May 10. Revenue soared again, bringing another quarter of positive earnings before income, tax, depreciation, and amortization (EBITDA). Let's dive right into its results for Q1, which ended March 31, and determine why this is one stock worth buying right now. 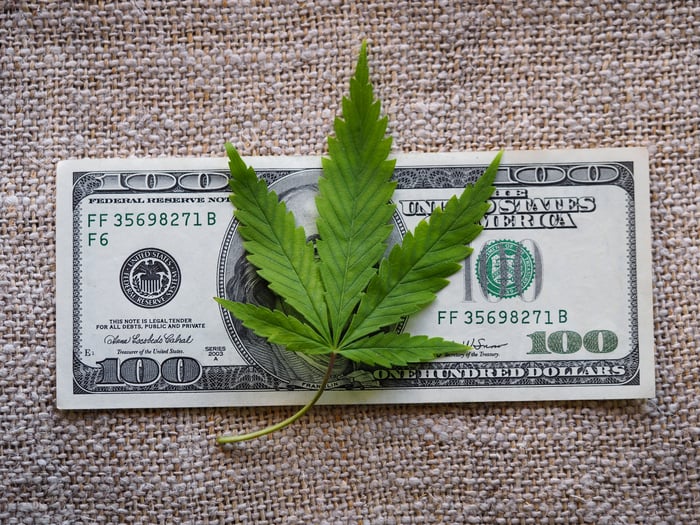 Over the past 12 months, Curaleaf's stock has gained 144%, outpacing the industry benchmark, the Horizons Marijuana Life Sciences ETF, and its gain of 70%. The company performed well in all quarters of 2020. Its recent Q1 2021 earnings were even better.

Revenue grew 170% year over year to $260 million in the quarter, thanks to a jump in both retail and wholesale sales. Organic growth across all existing stores and contributions from six new stores across Florida, Maine, and Pennsylvania in Q1 brought in a 231% surge in retail revenue, to $188 million. Curaleaf also gives credit to a spurt of revenue from Arizona after recreational marijuana became legal there in January 2021.

A company's ability to survive and thrive in an evolving industry can be determined in part by how it utilizes its capital resources in making strategic acquisitions. This is evident from the mistakes Curaleaf's Canadian counterpart Aurora Cannabis made when it haphazardly spent on acquisitions, putting itself in a difficult financial position.

Meanwhile, Curaleaf's wise growth strategies in making timely acquisitions have borne fruit. Curaleaf acquired cannabis oil brand Select from Cura Partners in February for $948.8 million. The strength of the Select brand in core western U.S. markets, and expansion of the brand in new central and northeastern markets, fueled the company's wholesale revenue growth of 254% to $72 million from the year-ago period. Curaleaf also launched some new products under the brand during the quarter. These new entrants include Select Squeeze, A tetrahydrocannabinol (THC)-infused beverage enhancer; Select Essentials, a high-potency oil with terpenes; and Select Fresh, a premium distillate oil with fruit flavors.

In 2020, Curaleaf also completed acquisitions of many other cannabis-product manufacturers and dispensaries across the country, including Curaleaf NJ, Arrow, MEOT, Remedy, Blue Kudu, and Alternative Therapies Group.

These acquisitions and innovative products could continue driving revenue and positive EBITDA for 2021 and beyond. Consistent positive EBITDA shows a company's ability to handle its operating expenses, while net profit determines its actual earnings after all the deductions. Curaleaf's selling, general, and administrative expenses (SG&A), minus non-recurring items, fell to 29% of total revenue from 36% in the year-ago period. This contributed to a whopping 213% year-over-year increase in adjusted EBITDA to $63 million.

High hopes for 2021 and beyond

Marijuana legalization at the state level is ramping up. Curaleaf opened four new stores in Illinois and Pennsylvania on March 31, bringing its total dispensaries across the nation to 106. The company holds an additional 32 licenses to expand its national footprint this year.

Recently, New Jersey and New York legalized recreational cannabis. The company expects to earn about $2.1 billion and $5 billion in sales, respectively, from these states each year. Management believes the company has a strong footing in the medical cannabis segment in both states, which will be beneficial in the long run as the recreational markets expand.

Revenue could grow sequentially to be in the range of $305 million to $315 million in the second quarter, according to management. Curaleaf's leadership team, led by CEO Joe Bayern, sees potential for margin expansion in states like California, Colorado, Michigan, and Utah. The company is on track to achieve its full-year revenue target of $1.2 billion to $1.3 billion.

Bayern also stated in the press release that the company is working on achieving "positive net income and positive operating cash flows in the back half of 2021." If Curaleaf continues growing revenue and positive EBITDA at this rate, I don't doubt it will hit its target.

Curaleaf has shown another solid quarter of revenue growth, consistent positive EBITDA, and smart growth strategies for the year to bring in profits. These are all the reasons I need to buy this pot stock right now.