Please ensure Javascript is enabled for purposes of website accessibility
Log In Help Join The Motley Fool
Free Article Join Over 1 Million Premium Members And Get More In-Depth Stock Guidance and Research
By Bram Berkowitz - May 20, 2021 at 10:23AM

The bank is shaking up senior leadership, with two current executives seen as the favorites to replace its longtime CEO.

Two candidates have emerged as the front-runners to take over for CEO James Gorman when he eventually retires from Morgan Stanley (MS -1.88%).

The investment bank and asset and wealth manager announced today that Ted Pick and Andy Saperstein will become co-presidents of Morgan Stanley.

Citing an anonymous source, Bloomberg reported that Gorman, who has been CEO since 2010, has told the board of directors he plans to stay in the top role for another three years. Despite other changes to senior leadership, Bloomberg also reported that Pick and Saperstein are seen as the top candidates to replace Gorman.

"I am highly confident one of them will be the CEO in the future," said Gorman, referring to his leadership team in an interview with Bloomberg. "It feels like the right time to more formally set up a transition over the next few years." 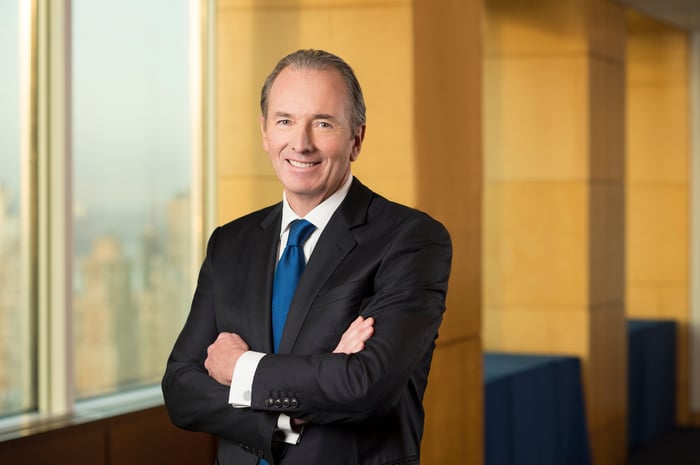 In other moves, Morgan Stanley announced that Dan Simkowitz, head of investment management, will become co-head of firm strategy and execution alongside Pick. Jonathan Pruzan, currently CFO at the bank, will become chief operating officer, while Sharon Yeshaya, currently the head of investor relations, will replace Pruzan as CFO. The new appointments will be effective June 1.

The news comes just days after JPMorgan Chase installed the two front-runners to replace CEO Jamie Dimon at the top of the company's large consumer bank.