Please ensure Javascript is enabled for purposes of website accessibility
Log In Help Join The Motley Fool
Free Article Join Over 1 Million Premium Members And Get More In-Depth Stock Guidance and Research
By Beth McKenna - May 21, 2021 at 8:00AM

The two fitness equipment companies recently delivered their reports for the first calendar quarter of this year. Here's how they stacked up in a metric-to-metric comparison.

Note that this period was Peloton's fiscal third quarter 2021 and a "transition period" for Nautilus, whose new fiscal-year calendar will run from April through March, so its next quarterly report will be for fiscal Q1 2022.

Also keep in mind that we're not considering qualitative factors and are looking at just one quarter's worth of data. Even with these caveats, however, the findings from this exercise should help you make investing decisions in the consumer-focused fitness equipment space. 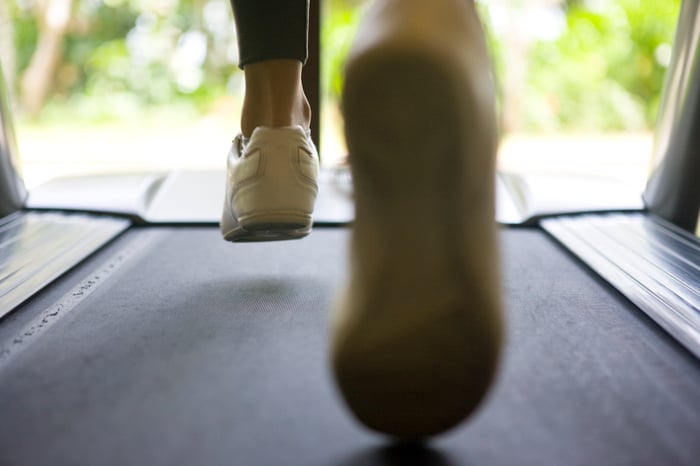 Of course, Peloton's revenue was about six times that of Nautilus and companies often benefit in several ways from having a scale advantage.

Both companies have experienced demand for their products surge during the COVID-19 pandemic. With the progress on the vaccine rollout in the U.S. and some other countries and people increasingly venturing outside of their homes, both Peloton and Nautilus will almost surely see a slowing of their revenue growth rates. In the next few quarters, the companies will face challenging year-over-year comparables.

That said, if you believe (as I do) that exercising at home will permanently remain an option that many consumers like having, then there's reason to be bullish on the long-term growth potential of the home-fitness space.

Nautilus gets the gold medal here, as it generated a profit according to generally accepted accounting principles (GAAP) in its most recently reported quarter and Peloton did not.

Both companies' bottom lines improved significantly from the year-ago period.

Strictly going by the numbers, Nautilus is the victor. But the difference is small enough that it seems fairer to call this one a tie.

First, let's address the question: What does a gross margin tell investors? A higher gross margin relative to a competitor with a similar business profile can reflect stronger pricing power. At this point, the two fitness companies' businesses have notable differences, so don't give too much power to their gross margins as a gauge of their pricing power relative to each other.

The reason Nautilus' gross margin was a little better than Peloton's is because Peloton's gross margin in its most recent quarter fell off a cliff relative to the year-ago period. Some of the factors that caused this plunge should be less of an issue in the coming quarters.

Its subscription gross margin's year-over-year rise was driven by economies of scale. Its product gross margin's big drop was primarily due to "expedited shipping investments, the September 2020 Peloton Bike price reduction, and a modest mix shift of sales to our treadmill products," the company said in its letter to shareholders.

The expedited shipping expenses should be considerably less next quarter and beyond for two reasons: The company has improved its order-to-delivery times and it will soon begin manufacturing at least some of its products in the United States, thanks to its April acquisition of Precor. Precor makes fitness equipment for commercial occupancies and has production facilities in this country.

Its sales mix will change, too, but that should be only temporary and it's not for a good reason. After strenuously pushing back against the Consumer Product Safety Commission's (CPSC) recommendation that Peloton recall its Tread+, the company recently announced a recall of both of its treadmill models and is pausing their sales while it remedies their safety problems. The Tread+, the higher-end model associated with one child's death and dozens of injuries, likely won't be back on the market for some time.

As for Nautilus, it doesn't break down its gross margin in the same way, which makes sense at this point since it's a newer entrant into the digital-fitness subscription market. If the company is successful in gaining subscribers, its gross margin should increase.

This category is a tie. Nautilus generated cash from operations in the quarter, while Peloton ate up much cash running its operations.

However, Peloton's huge cash position makes Nautilus' cash on hand look like pocket change. This gives it a big advantage in such things as making acquisitions and spending on research and development. That said, it's also important to keep in mind that Peloton also has much more debt than Nautilus. When we consider their cash positions relative to their debt, neither company has a significant advantage.

Peloton is the champ here. On both an absolute and percentage-of-revenue basis, it spent much more money on R&D than its rival. This category is one where scale often matters a lot.

That said, simply spending much more money on R&D than a competitor is no guarantee a company will outperform that competitor over the long term. Fewer dollars smarter spent is better than many dollars unwisely spent.

Nautilus is constrained in its R&D spending and in other ways since it has much less cash than Peloton. It wouldn't be surprising to me to see Nautilus team up in some manner with a company with deeper pockets.

Peloton and Nautilus each won one category and there were three ties in this exercise.

Keep in mind the caveats mentioned at the top of this article: Qualitative factors (such as top management quality) are often at least as important as quantitative ones and we only considered one quarter's results. Moreover, we also didn't look at stock valuations.

On that note, an article on stocks wouldn't seem complete without including some performance data. In 2021, both stocks are down through May 20, though Peloton is down a lot (about 34%), while Nautilus is down by just about 1%. However, both stocks remain big winners over the last year: Nautilus is up 193% and Peloton is up 123%, while the S&P 500 has returned about 42% over this period.