Please ensure Javascript is enabled for purposes of website accessibility
Log In Help Join The Motley Fool
Free Article Join Over 1 Million Premium Members And Get More In-Depth Stock Guidance and Research
By Leo Sun - May 22, 2021 at 7:15AM

This resilient chipmaker isn't exciting, but it's still a great long-term investment.

Recent retirees should ignore all the noise about cryptocurrencies, NFTs, SPACs, and other speculative investments. Some of these investments might generate big short-term gains, but they're far too volatile for older investors who want to prioritize capital preservation and stable income.

Instead, retirees should invest in companies that have well-diversified businesses and wide moats, and constantly reward shareholders with big buybacks and dividends. Their stocks should also consistently outperform the S&P 500 index. Texas Instruments (TXN -0.81%) checks all of those boxes, and it could be a retiree's dream stock for three simple reasons. 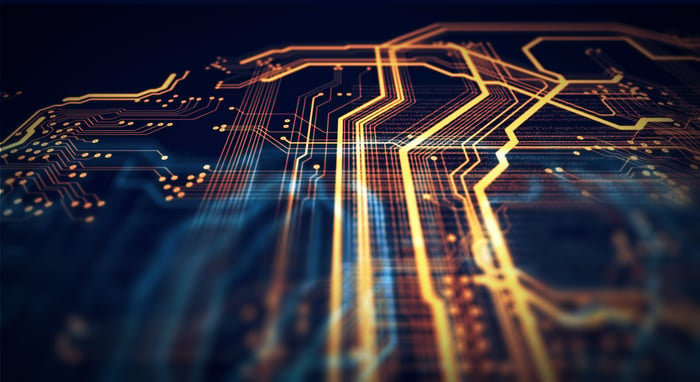 Texas Instruments mainly produces analog and embedded chips for a wide range of industries. As an IDM (integrated device manufacturer), TI designs and manufactures its own chips at its own first-party foundries instead of outsourcing the production to third-party foundries.

Being an IDM insulates Texas Instruments from the global semiconductor shortage, which is occurring because third-party foundries like TSMC (TSM -2.04%) and Samsung still can't produce chips quickly enough for insatiable "fabless" chipmakers like AMD, Qualcomm, and NVIDIA.

Those delays could still affect TI by delaying shipments of products that require a wide array of chips, but its business remains well diversified across multiple markets. Last year it split its annual revenue among industrial machines (37%), personal electronics (27%), automakers (20%), communications equipment (8%), and enterprise systems (8%).

TI's chips aren't as powerful or expensive as CPUs or GPUs, but they support critical power management, wireless, and data processing features. They aren't cutting edge chips that need to be manufactured with ever-shrinking nodes -- they're merely simple and cheap chips that will gain more content share in devices as they become more advanced.

That simple approach makes TI a more stable investment than advanced chipmakers like AMD and NVIDIA, which are approaching technological bottlenecks as they create smaller and more powerful chips.

2. A history of beating the market

Between fiscal 2010 and 2020, TI's annual revenue rose from $13.97 billion to $14.46 billion. That top-line growth might seem sluggish, but it includes the company's exit from the mobile application chip market back in 2012.

Meanwhile, TI's annual net income increased from $3.23 billion in 2010 to $5.60 billion in 2020. Its profits grew as it retreated from the competitive mobile chip market and transitioned from 200mm to 300mm wafers, which cut its production costs by up to 40%. Its annual earnings per share also more than doubled from $2.62 to $5.97 as it bought back more shares.

As a result, TI's stock beat the S&P 500, in terms of price growth and total return, over the past decade: 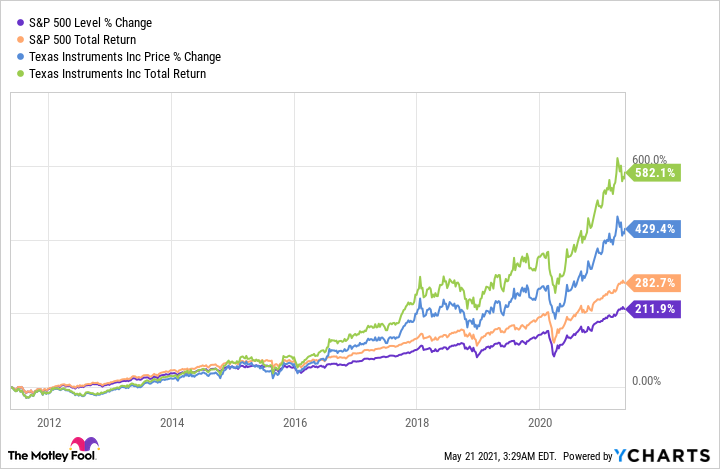 Past growth never guarantees future gains, but I believe TI's stable growth should help it remain ahead of the market for years to come.

3. Returning most of its free cash flow to shareholders

Texas Instruments grew its free cash flow (FCF) at an average annual rate of 12% between 2004 and 2020. It spent most of its FCF on dividends and buybacks.

It's raised its dividend annually for 17 straight years, during which it increased its payments at a compound annual growth rate (CAGR) of 26%. It currently pays a forward dividend yield of 2.3%, which is significantly higher than the 10-Year Treasury note's current yield of about 1.6%.

TI also reduced its share count by a whopping 46% between 2004 and 2020. Unlike many other companies, TI didn't suspend its dividends or buybacks throughout the pandemic, even as the crisis disrupted the auto and industrial markets that generated more than half its revenue last year.

Texas Instruments isn't as exciting as other higher-growth semiconductor stocks, but it's weathered previous economic downturns and remains firmly committed to boosting shareholder value, and its stock still looks reasonably valued at 24 times forward earnings. All those strengths make it an easy stock for retirees to buy and forget.

Leo Sun has no position in any of the stocks mentioned. The Motley Fool owns shares of and recommends NVIDIA, Qualcomm, Taiwan Semiconductor Manufacturing, and Texas Instruments. The Motley Fool has a disclosure policy.