Please ensure Javascript is enabled for purposes of website accessibility
Log In Help Join The Motley Fool
Free Article Join Over 1 Million Premium Members And Get More In-Depth Stock Guidance and Research
By Patrick Bafuma - May 22, 2021 at 6:11AM

With COVID-19 dominating the world's healthcare concerns for the past year and change, people have been letting a lot of other potential medical concerns slide. One result of that: a drop-off in cancer screenings.

Even so, Guardant Health (GH -5.16%) -- a not insubstantial holding in Cathie Wood's ARK Genomics Revolution ETF (ARKG -4.61%) -- was able to grow its first-quarter revenue by 17% year over year to $79 million. The liquid biopsy specialist also enjoyed record clinical volume, increasing the number of tests performed in the quarter by 21% year over year to 18,390, according to the earnings release it delivered May 6.

What management said during that afternoon's conference call offered some hope for the company's future. However, the call also raised some serious concerns about the company's valuation and its ability to become profitable. The latter issues eventually outweighed the former in the minds of investors. After a slight gain on May 7, the market sent all 650,000 plus of Wood's shares in Guardant down by about 10% by the close of the next trading session. 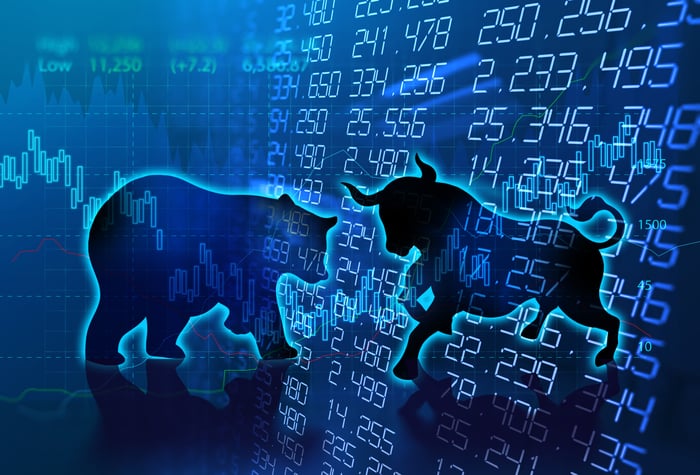 With annual patient checkups down by 10% to 20% from pre-pandemic levels and office visits still only back up to about half of where they were before coronavirus hit, there is likely to be a windfall of testing revenue coming Guardant's way as people catch up on their screening exams; clinical volume is expected to grow more than 40% throughout 2021. Noting that face-to-face sales rep visits are correlated with increased sales, management is pleased that its sales force is no longer visiting offices 100% virtually. With 30% to 40% of current sales rep visits now in person, business may ramp up even further.

While this biotech continues to rack up positive use-case data for its tests across multiple cancer types, as well as across multiple classes of therapies, what piqued my interest was what the company referred to as "adaptive management." Essentially, healthcare professionals repeat a patient's Guardant360 test a few weeks after they begin a new treatment. The results can help them differentiate those who respond to that treatment from those who don't, giving the clinicians an earlier indication about whether they should continue it or explore other therapeutic regimens. Investors should keep an eye on how the medical community adopts adaptive management, as it has the potential to more than double the number of Guardant tests being performed.

And while this is purely speculation, one could imagine clinical trial operators beginning to utilize such follow-up tests not only as companion diagnostics, but also as gauges of treatment efficacy, hoping to shorten clinical trial durations.

Taking an "if you can't beat 'em, join 'em" approach, the liquid biopsy pioneer is also launching its first tissue biopsy product. This means that its diagnostic tests, which use blood samples to help determine which treatment would be best for a patient, will soon be performable using biopsy samples. Perhaps this is a sign that Guardant sees a limited future for liquid biopsies. Perhaps it's simply seeking another avenue of growth. Or perhaps management noted that rival Foundation Medicine (now part of the Swiss pharma giant Roche) already has such an offering, and didn't want to fall behind.

The $11.7 billion company's net loss of $109.7 million for the quarter was nearly four times as large as its $27.7 million loss in the prior-year period. Even worse, Guardant's losses are expected to accelerate as it invests heavily in research and development. Meanwhile, revenue only grew 17% in Q1 to approximately $79 million.

Then there is the average selling price (ASP) per test. While ASP increased to $2,710 in the quarter from $2,489 in the prior-year period, management expects ASP for the rest of the year to be closer to $2,600. That is despite the good news that since April 1, 2021, Medicare has agreed to reimburse Guardant360 CDx tests at a rate of $5,000 until the end of 2021. At the start of 2022, Medicare will trim its reimbursement rate to the median private payor rate, which Guardant Health suggests will likely be somewhere north of $4,000. So even with a more than 20% short-term ASP increase for Medicare patients, the company still expects its ASP to decrease for the rest of the year. Ouch. When Medicare's payments revert to the median rate, the company might be in trouble. Fortunately, the diagnostic developer has quite the cushion, having ended the first quarter with $1.9 billion in cash.

Then there are the impacts of COVID-19 on the company's clinical-trial-related business. While the pace of clinical trials is picking back up, the number of patients enrolled in those studies is still down from 2019 levels. Guardant Health's pharmaceutical testing revenue nosedived by 33% in Q1 from the prior year, so it appears that this particular pandemic headwind has persisted.

The future for Guardant Health currently seems opaque and full of concerns. Will adaptive management and tissue-based testing be enough to compensate for rising expenses and decreasing ASPs? Are there enough open time slots in oncology offices to accommodate that increased testing?

There's a lot of uncertainty here, especially considering that the company trades at a price-to-sales ratio of 31 and is only guiding for 27% growth. Consider, for example, that genetic sequencing giant Illumina (ILMN -3.02%), which is forecasting similar growth rates, trades at half that multiple. Given the high premium healthcare investors would have to pay to buy Guardant Health today, they may want to look elsewhere for growth. Or at least, they might want to wait and see how the next couple of quarters play out for the liquid biopsy specialist.