Please ensure Javascript is enabled for purposes of website accessibility
Log In Help Join The Motley Fool
Free Article Join Over 1 Million Premium Members And Get More In-Depth Stock Guidance and Research
By Will Healy - Updated May 24, 2021 at 4:49PM

Does the 5G provider or the tower owner offer more profit potential?

As one of the few 5G providers in the U.S., AT&T (T -0.50%) relies heavily on American Tower (AMT 0.58%). American Tower, which is a real estate investment trust (REIT) that owns about 43,000 properties in the U.S., helps to facilitate AT&T's 5G service. From the stockholder perspective, both companies have long served as dividend stalwarts that have drawn the attention of income investors. Now, the question for investors is: Which stock will likely serve them better?

Let's take a closer look at these two companies and see if we can find the answer.

What we know about AT&T

AT&T stands as one of only three of America's 5G service providers. Unlike Verizon and T-Mobile US, AT&T has significant interests in non-telecom businesses as well, choosing to make some expensive acquisitions in the past decade in media properties like DIRECTV and WarnerMedia. Company management recently has determined that those investments aren't working out and is in the process of spinning off both operations in some form, including a $43 billion megamerger announced this month with Discovery Communications to form a new publicly traded still-to-be-named spinoff company owned 71% by AT&T shareholders and 29% by Discovery shareholders. 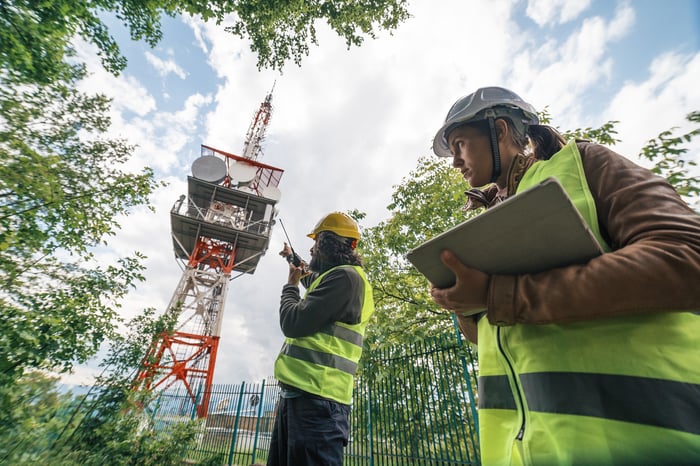 However, these problematic acquisitions left AT&T with a tremendous debt burden. After spending $23 billion in government auctions in 2021 to acquire the needed spectrum for its 5G services (basically buying "radio frequency real estate" to improve its coverage), AT&T has accumulated roughly $160.7 billion in long-term debt on its books. The $43 billion expected from the WarnerMedia spinoff will help the company manage some of that debt.

These transactions may have undermined AT&T's dividend. In the wake of the deal, news was also released that the company will slash its dividend payout so that it only accounts for something closer to 40% of its free cash flow each quarter. That amounts to a dividend reduction of nearly half of the current $2.08 per share. This will likely result in AT&T's dividend yield falling below that of Verizon's 4.4% return (it's currently 6.9%).

More importantly, the cut will cost AT&T its Dividend Aristocrat status. This will likely result in many income investors and institutional funds that focus their investment funds in Aristocrats to sell their AT&T holdings. The move will also reduce AT&T's $15 billion annual dividend burden down to approximately $8 billion, freeing up more cash to pay down its debt. 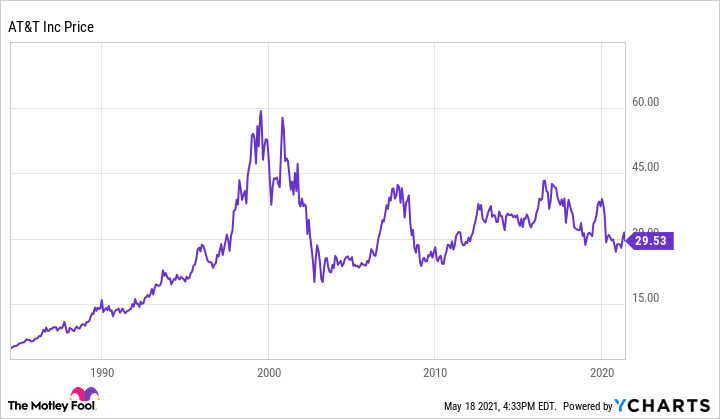 That lower burden could help, as its current financials do little to boost AT&T stock. Revenue decreased 1% from last year's levels in the latest quarter, though net income spiked 60% primarily because of an actuarial gain. For 2020, revenue dropped 5% from the previous year, and an $18.9 billion asset impairment led to a loss during that year.

Additionally, guidance for 2021 calls for both revenue and earnings to closely approximate 2020 levels. Given these challenges, one can see why AT&T stock has struggled to gain traction.

Due to the lack of increases and slow growth, AT&T stock trades at about 19 times earnings, close to five-year highs for the P/E ratio. Time will tell if the lower dividend costs and more exclusive focus on 5G can help the valuation rise further.

What we know about American Tower

Given AT&T's challenges, investors may perceive cell tower-focused companies such as American Tower as a more lucrative investment. Despite the name, its 187,000 sites across the world help make 5G possible across five continents. While it has competition, zoning restrictions often freeze out potential competitors in many areas providing it with a competitive advantage if it is the first mover in a key market.

Despite the tech focus, American Tower operates as a real estate investment trust (REIT). As such, it has a tax obligation to pay out at least 90% of its net income in dividends. This payout has risen every quarter since the second quarter of 2012, soon after it converted to REIT status. The current dividend amounts to $4.96 per share annually, a dividend yield of about 2%.

Although that does not match the yield of AT&T's reduced payout, American increased quarterly revenue 8.3% from year-ago levels, and 2020 revenue came in 6.1% higher than what American reported in 2019. The company forecasts a 38% increase in net income this year.

Like AT&T, American is currently managing a heavy debt burden. Debt now stands at about $29.3 billion, well above equity levels of $4.3 billion. Additionally, the $545 million in dividend distributions and $207 million in interest costs claimed almost all of the $758 million in free cash flow.

Moreover, because it trades at nearly 60 times earnings, its valuation is more expensive relative to that of AT&T. Granted, American Tower stock price grew by less than 10% over the last year, but it has moved steadily higher since bottoming in 2003. It has surged about 1,300% since its IPO back in 1997. 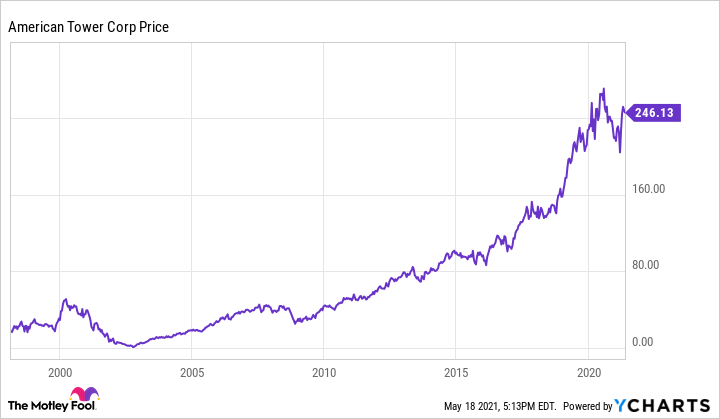 Between these two stocks, American Tower appears to offer more profit potential. AT&T could improve over time as a lower dividend burden and the DIRECTV and WarnerMedia spinoffs free up cash. And the loss of Dividend Aristocrat status could haunt AT&T for years.

American projects significant increases in net income this year. This could set the stage for stock price growth and increase the prospect for free cash flows that will allow for dividend growth and debt reduction.

Between the two, American Tower is the better buy at the moment.