Please ensure Javascript is enabled for purposes of website accessibility
Log In Help Join The Motley Fool
Free Article Join Over 1 Million Premium Members And Get More In-Depth Stock Guidance and Research
By Daniel Foelber - May 24, 2021 at 10:15AM

Down 70% in three months, is this space stock on sale or burning out?

Going to space is something many of us have dreamed of since we were kids. And many of us dreamers got excited when, in October 2019, Virgin Galactic Holdings (SPCE 2.01%) was added to the New York Stock Exchange via a special purpose acquisition company (SPAC) as the first public pure-play space tourism stock. The company is targeting ultra-high-net-worth clients for the time being -- with reservations going for $250,000 a pop -- but with a little imagination, it's easy to envision a world, maybe even within our lifetimes, where the average person can punch their ticket to the stars.

For Virgin Galactic to remain part of delivering that dream, it needs to begin transporting customers safely into space and earning revenue. It's a race against the clock, as every quarter the company faces more losses and skepticism. Its stock price reflects this struggle.

In less than two years, shares of Virgin Galactic have soared above $60 and crashed as low as $7. As of this writing, the stock is around $19 a share, down a staggering 70% from its high on Feb. 11.

A good way to stay levelheaded through the volatility is determining what Virgin Galactic, the company, needs to be successful and trusting the stock performance will follow, for better or for worse. With a mere $238,000 in 2020 revenue and a loss of $273 million, traditional performance metrics aren't particularly useful. Instead, let's break down the company's risks without losing sight of the big picture to determine how it can turn its business around. 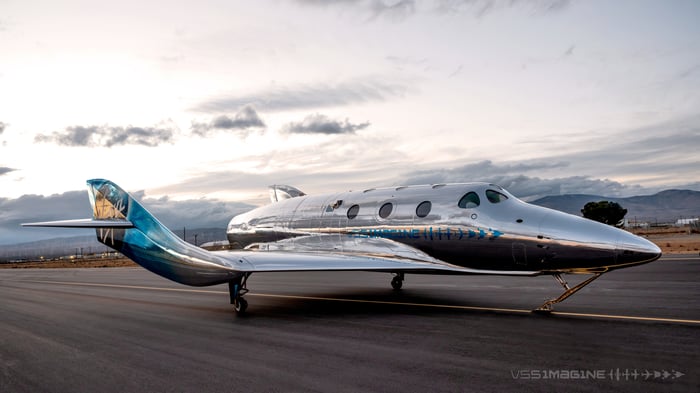 Motherships? Spaceports? The jargon can sound less like a business plan and more like a sci-fi movie. It's actually all pretty simple, and definitely worth understanding.

Just like an aircraft carrier transporting fighter planes out to sea, Virgin Galactic uses what it calls a mothership to carry a spaceship up to launch altitude. Onboard the spaceship are customers ready to embark on a suborbital journey through space. Virgin Galactic currently operates one WhiteKnightTwo mothership called VMS Eve and one SpaceShipTwo spaceship called VSS Unity, and has two new SpaceShipTwo aircraft in the works -- VSS Imagine and VSS Inspire. Spaceport America in New Mexico is Virgin Galactic's headquarters and center of operations.

Virgin Galactic's grand plan is to build a network of spaceports to take what it calls "private astronauts" on short trips through space. On its earnings call in February, management said that it wants to conduct an average of 400 flights per spaceport per year, with each spaceport housing two to three motherships with the number of spaceships per spaceport in the "high single digits to low double digits."

Virgin Galactic has yet to give a clear estimate for the number of spaceports it intends to build, thereby making revenue predictions challenging. In the meantime, investors should monitor the growth of the company's existing spaceport by keeping track of aircraft completions, as well as its ability to fill flights. That way, they can better gauge if 400 flights per spaceport is realistic, and what it entails from a profitability standpoint.

In addition to space tourism, Virgin Galactic has the potential to earn revenue from research it conducts for other companies, for delivering payloads for NASA under its Flight Opportunities Program, and for professional astronaut training. Virgin Galactic signed an agreement with NASA in June 2020 that could lead to commercial activities onboard the International Space Station, among other things. Like most Virgin Galactic concepts, this is something that investors should keep an eye on, bearing in mind that revenue and profit forecasts remain too vague for the time being.

The main reason behind the Virgin Galactic stock sell-off is flight test delays. This has been the headline story for the company over the last six months and it all has to do with VSS Unity's inability to complete its last three flight tests before taking customers into space.

Originally intended for December 2020, the first test was then rescheduled for May, with the other two tests expected to come sometime this summer. Virgin Galactic came under pressure following its first-quarter conference call in early May when management indicated that VSS Unity's issues were resolved, but VMS Eve needed an inspection, thereby decreasing the likelihood of reaching its May target. But last week, the company released a statement saying that VMS Eve was cleared for flight, stating May 22 as the target date.

And, indeed, on May 22, the company announced that it had "completed its third spaceflight and the first ever spaceflight from Spaceport America, New Mexico. ... VSS Unity achieved a speed of Mach 3 after being released from the mothership, VMS Eve, and reached space, at an altitude of 55.45 miles before gliding smoothly to a runway landing at Spaceport America."

The good news is that remedying the reasons for the test flight delays seems to be within the company's control. In its Thursday statement, Virgin Galactic said it would also be testing the work it completed on VSS Unity to lower the electromagnetic interference (EMI) levels that caused the December delay in the first place.

A successful test flight brings the company one step closer to bringing private astronauts into space. However, Virgin Galactic needs to do a better job at giving investors more accurate timetables as it moves forward with its business plan. 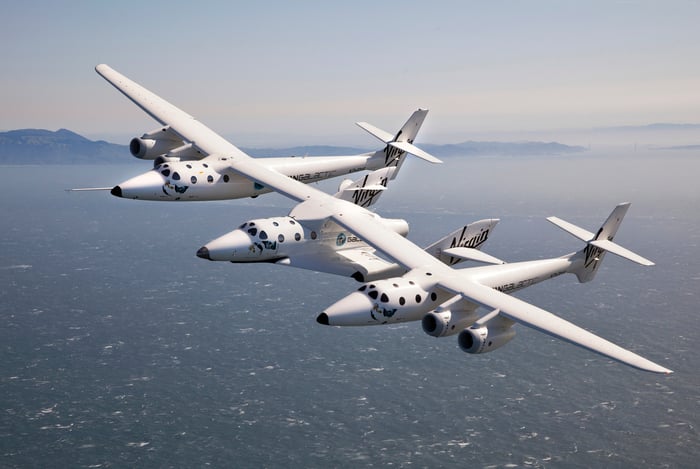 The best thing Virgin Galactic can do is stay on schedule. Staying on schedule means earning investor trust and getting closer to making money. The stakes are high. Between 2018 and 2020, Virgin Galactic lost a cumulative $622 million and had operating cash flow of negative $588 million. In 2020 alone, it burned $233 million in cash. However, issuing common stock resulted in a big boost to the company's cash position. It ended the year with $666 million in cash and cash equivalents on the balance sheet, giving it ample dry powder to get through the next couple of years.

Before Thursday's announcement, investors were growing impatient waiting for Virgin Galactic to get its act together. The most recent test flight is a step in the right direction, but the company needs to prove it can consistently hit its goals and stay on track. Investors should pay close attention to the company's ability to successfully complete VSS Unity's second and third test flights, before reaching the ultimate goal of bringing customers into space at the beginning of next year.

The investment decision for Virgin Galactic is rather simple. Belief in the future of the space tourism industry and Virgin Galactic's ability to hit deadlines, roll out successful technology, and scale would be a reason to buy. However, because Virgin Galactic has missed deadlines, its sell-off is somewhat justified. Therefore, one approach could be to buy in thirds. This method of investing starts with your determining the maximum number of shares or dollar amount of Virgin Galactic you want in your portfolio. You can then buy one-third now, buy another third, let's say after it completes its second and third test flights for VSS Unity, and then maybe the last third once it successfully begins launching customers into space. Or pick a completely different schedule that suits your needs. That way, you can take advantage of the current reduced price while holding the company accountable for its deadlines.