Please ensure Javascript is enabled for purposes of website accessibility
Log In Help Join The Motley Fool
Free Article Join Over 1 Million Premium Members And Get More In-Depth Stock Guidance and Research
By Dan Caplinger - May 24, 2021 at 10:36AM

After major disruptions to their strategic plans, these two companies are celebrating.

As strongly as the stock market has performed over the past year, there are still plenty of stocks that have struggled to regain their momentum. Several industries have faced headwinds that haven't let up even in the face of an improving economy, while some companies have been waiting for key events to determine their future course. When things go right for these businesses, it can spell a true recovery in the long run.

A couple of story stocks looked to write happy endings on Monday. Virgin Galactic Holdings (SPCE -1.48%) soared after a successful weekend, and although Norwegian Cruise Line Holdings (NCLH 0.07%) didn't experience quite a bump higher that many might have hoped to see, things are starting to look up for the cruise ship operator as well. Read on for the details.

Virgin Galactic gets into space

Shares of Virgin Galactic climbed more than 13% on Monday morning. The space tourism company got past a key milestone on its path toward allowing hundreds of eager passengers to get their shot at visiting the final frontier. 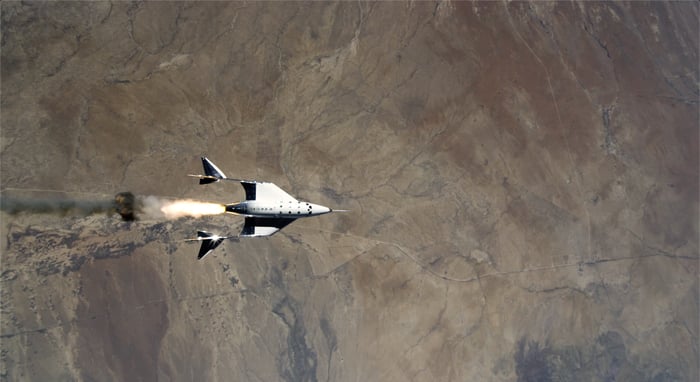 On Saturday, Virgin Galactic's VSS Unity spacecraft successfully launched from its VMS Eve mothership platform, rocketing more than 55 miles above the company's New Mexico spaceport. Unity reached a top speed of about three times the speed of sound, and after reaching its highest altitude, the spaceplane took about 13 minutes gliding back to land safely.

The launch came five months after Virgin Galactic had suffered a disappointing setback in a similar test flight attempt. Back in December, Unity's engines failed to ignite after rising to launch altitude. Virgin Galactic had hoped to resume test launches in February, but it decided to wait longer to evaluate its spacecraft.

The move higher for Virgin Galactic stock follows a long period of declining share prices. If the space tourism specialist can keep moving forward, however, then long-term shareholders might end up having the last laugh.

Meanwhile, Norwegian Cruise Line Holdings saw its stock rise about 2%. The cruise line operator released an ambitious plan to try to get its vessels back on the open seas within the next few months.

In a Monday morning press release, Norwegian said that it anticipates cruises from Seattle to Alaska starting in early August. The company will seek a conditional sailing certificate from the U.S. Centers for Disease Control and Prevention, in accordance with the agency's current order limiting cruise ship operations. Norwegian is optimistic that it can get CDC approval within the next few days.

Norwegian is counting on its SailSAFE COVID-19 health and safety protocols to pass muster both with regulatory officials and cruise travelers. All crew and passengers will be required to be fully vaccinated against COVID-19 in addition to following the guidelines of the protocols.

Investors have had to endure gut-wrenching volatility in Norwegian's stock over the past 18 months. Now, though, shareholders hope that a path to a full recovery will eventually lead to their regaining their losses as well.