Please ensure Javascript is enabled for purposes of website accessibility
Log In Help Join The Motley Fool
Free Article Join Over 1 Million Premium Members And Get More In-Depth Stock Guidance and Research
By Rich Smith - May 24, 2021 at 3:32PM

Q1 wasn't great for Diana, but it was a lot better than it might have been.

Shares of dry bulk shipping company Diana Shipping (DSX -0.83%) stock are likely to book a second straight (trading) day of gains Monday, with shares up 8% as we head into the final hour of the trading day.

Diana stock closed out last week strong, as you may recall, rising 7.9% after reporting better-than-expected fiscal first quarter 2021 sales of $41.1 million and better-than-expected "earnings," too. (Actually, Diana lost money for the quarter -- but only $0.03 per share where Wall Street had forecast a $0.06 per-share loss.)

Sales declined 6% as compared to last year's Q1, but only, management explained, because the company sold four of its ships and consequently had fewer vessels to utilize. However, Diana made better use of the ships that remained as fleet utilization climbed to 98.6%.

Combined with higher "time charter equivalent" rates on dry bulk cargo (up 0.5%) and lower expenses (down about 4%), this translated into a much smaller loss for the quarter. 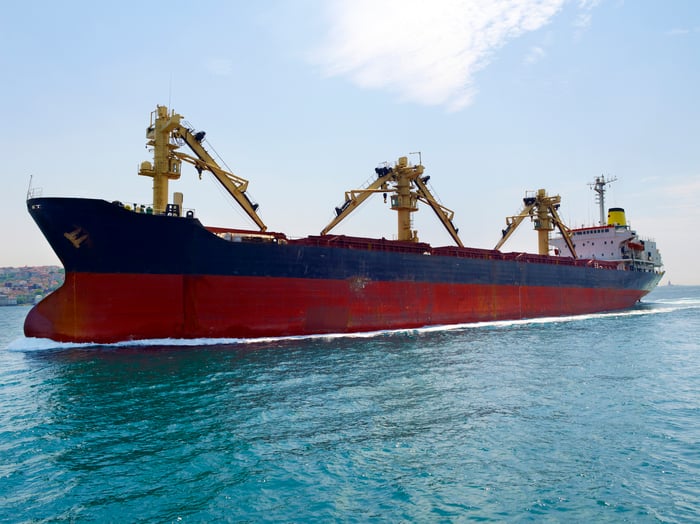 Management did not provide specific guidance for what to expect over the rest of this year, but analysts are optimistic. According to consensus estimates, Diana will continue shrinking its generally accepted accounting principles (GAAP) losses in Q2 ($0.03 per share expected) and continue to grow its revenues (predicted to be up 15%). By the time the year ends, analysts expect to see Diana close out this year with a net profit of $0.05 per share -- and full-year revenue growth of nearly 21%.