Please ensure Javascript is enabled for purposes of website accessibility
Log In Help Join The Motley Fool
Free Article Join Over 1 Million Premium Members And Get More In-Depth Stock Guidance and Research
By Zhiyuan Sun – Updated May 25, 2021 at 10:34AM

This pharmaceutical giant and troubled coronavirus vaccine maker has lagged behind the overall market. Is it a decent contrarian play?

Despite the economic turmoil of the past year, the S&P 500 has delivered a magnificent 43% year-over-year rally. But those gains were far from uniform across all stocks, and indeed, many were left behind. One of these relative laggards was blue-chip pharmaceutical Johnson & Johnson (JNJ 0.33%): Its stock has underperformed the index by more than 20 percentage points over the past 12 months.

That was a major disappointment for shareholders, many of whom were betting that a successful J&J coronavirus vaccine would lift the company's shares. But is this pharma stock a buy today? 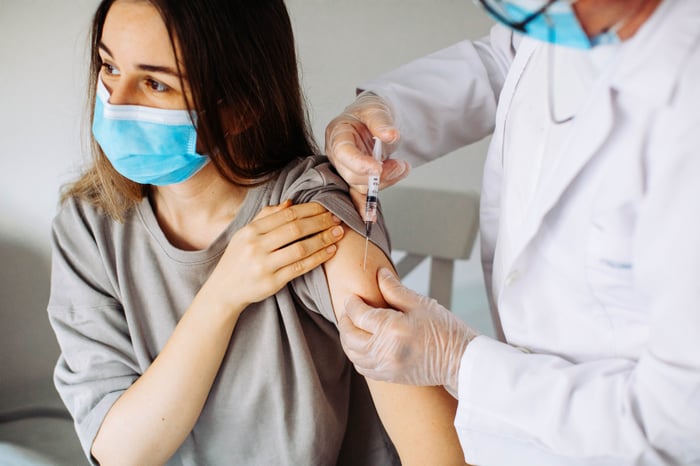 Last year, Johnson & Johnson (with $1 billion in federal support) developed a one-dose coronavirus vaccine that was found to be 72% effective in clinical trials. It offered a couple of significant upsides compared to the mRNA vaccines that the FDA also approved for use: It has much less demanding cold-storage requirements, so it can be distributed in places that lack expensive cold-chain infrastructure. And its single-shot regimen gives it an advantage in terms of inoculating populations that are harder to reach.

However, the rollout of that vaccine, dubbed Ad26.CoV2.S, has been less than rosy. In fact, Johnson & Johnson's vaccine now represents as little as 5% of overall vaccine volume in states like California.

Public image problems have plagued Ad26.CoV2.S since its release. First, people noticed that its distribution footprint correlated with communities in the poorest zip codes and rural areas. This related to the fact that it could be sent easily to places that the other vaccines could not be, but the disparity nonetheless led to baseless conspiracy theories alleging that the distribution strategy was racist in nature, as Ad26.CoV2.S had a somewhat lower efficacy rate than the Pfizer and Moderna vaccines.

Then, the U.S. Food and Drug Administration uncovered that the company's contract manufacturer, Emergent Biosciences (EBS -1.32%), was unqualified to produce vaccines at its Baltimore plant. Among many other issues, Emergent Biosciences employees tainted as many as 15 million doses of Johnson & Johnson's vaccine with ingredients meant for AstraZeneca's coronavirus vaccine.

AstraZeneca then had to relocate the production of its vaccine abroad to the Netherlands. On top of that, 28 people developed serious blood clots after receiving Ad26.CoV2.S. That's an extremely rare result considering that 8.7 million people had been given the vaccine. Even so, it contributed to a widespread perception that Johnson & Johnson's vaccine is inferior, so people are largely choosing the mRNA shots instead when they can, even if it means a longer wait to get their jabs.

Looking past the vaccine drama

Investing in Johnson & Johnson stock should never have been about speculating on its COVID-19 vaccine potential in the first place. Last year, it committed to selling Ad26.CoV2.S on a not-for-profit basis for the duration of the pandemic.

Meanwhile, during the first quarter, the pharma giant's revenue increased by 7.9% year over year to $22.3 billion. At the same time, its earnings per share improved 6.9% to $2.32. That growth is particularly impressive as Johnson & Johnson is already a mega-corporation.

There was notable growth in sales worldwide across its pharmaceuticals and medical devices segments, though it was held back a bit by a small decline in its consumer health segment, where sales fell for certain supplies that had been in high demand early in the pandemic.

A key driver behind Johnson & Johnson's long-term growth is its commitment to research and development. Over $2.3 billion of the company's sales are reinvested back into innovating new drugs. It has 10 drug approval requests pending in indications ranging from multiple myeloma to pulmonary arterial hypertension to schizophrenia. Johnson & Johnson has a further five candidates awaiting submission to regulators, and four treatments in phase 3 clinical trials that have data readouts due by the end of the year.

Right now, the average pharma stock trades at about 5 times sales and 123 times earnings, and most companies in the space don't pay a dividend. Meanwhile, Johnson & Johnson stock has a valuation of 4.8 times revenue, but only 18 times earnings. Its dividend yield is also decent at 2.37%, noticeably better than the 1.4% average yield of the S&P 500.

Overall, given the strength of its core operations, its great R&D pipeline, and its cheap valuation, Johnson & Johnson is a solid stock to buy now. Investors should consider that its shares have significant untapped value, regardless of whether it ultimately sees financial success from its coronavirus vaccine program.