Please ensure Javascript is enabled for purposes of website accessibility
Log In Help Join The Motley Fool
Free Article Join Over 1 Million Premium Members And Get More In-Depth Stock Guidance and Research
By Luis Sanchez CFA - May 25, 2021 at 9:07AM

This long-established payments company is modernizing its services and rewarding its investors with a nice dividend.

Western Union (WU 0.61%) is a leading cross-border payment transfer business that has been serving customers for over a hundred years. While it may seem like a stodgy company at first glance, it has a fantastic track record of adapting throughout its history. From creating some of the world's first credit cards to developing modern-day fintech software, Western Union has demonstrated its ability to stay ahead of the game.

The company offers a 3.8% dividend yield at Monday's prices, and with fintech start-ups nipping at its heels, investors should know if the company can keep up the pace. 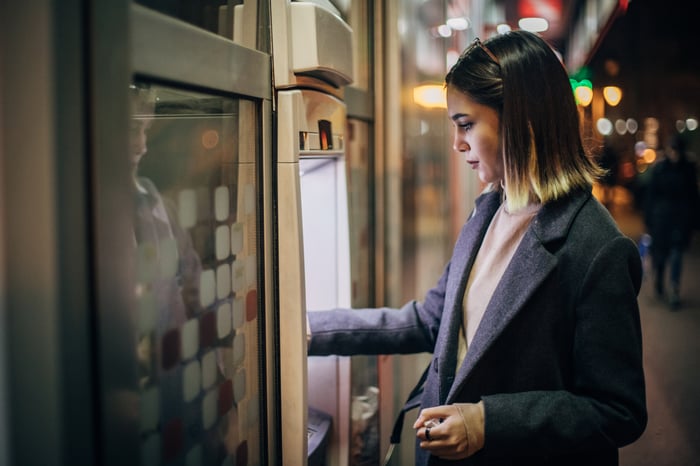 Western Union stands out as the undisputed market leader in its industry, bringing in more than three times more fund transfer revenue than its closest competitor, MoneyGram International. Using Western Union, customers can send money all around the world, either directly to bank accounts or to a retail location where recipients can collect in cash.

One of the most critical assets in the transfer payments business is corridor control. Corridors describe common send and receive routes -- for example, someone may conduct a remittance transfer from Singapore to India, or Korea to Nepal, just to name a few corridors. Developing the infrastructure to operate in any channel is a very time- and resource-intensive process. The combination of Western Union's well-known brand and its global presence provide it with an attractive competitive moat in the money transfer industry.

On top of corridor control, Western Union also has a developing presence in digital transfers. With more and more countries in receiving markets creating digital wallets and bank accounts, it has become critical for remittance companies to offer online services. In response to this trend, Western Union improved its website and later launched a transfer app in 2016. Digital payments currently account for 20% of total transfer sales.

Does fintech pose a challenge?

Besides the traditional players in the industry, multiple new fintech start-ups are trying to elbow into the cross-border payments industry. Firms such as Xoom (owned by PayPal), Remitly, and others are all entering the digital channel side of the market.

A unique advantage Western Union has over these newer companies lies in pre-established market presence among competitive corridors. Newer fintech businesses have to build out compliance and infrastructure one corridor at a time. A process will continue to chip away at margins. And while more recent entrants to the market need to focus on acquiring customers, Western Union has a much easier time converting pre-existing customers to digital, which also helps to improve cost structure.

Additionally, the company has recently developed award-winning fintech software capable of integrating directly with other financial institutions. This software allows firms to offer their customers Western Union's services through their apps or websites. While Western Union misses out on direct customer access, this deal is incredibly scalable and unlocks a much larger addressable market.

With a dividend yield exceeding 3.8%, many investors are interested in Western Union's stock for its income. However, absolute yield isn't the only thing that dividend investors should focus on. The sustainability and growth of the dividend are also important.

The good news is that Western Union has increased its dividend per share payment over time. This is a good signal that the company will probably continue increasing the dividend if it can afford to do so. If the dividend continues to grow over time, then investors will benefit from a growing stream of income -- even if the stock price doesn't change. 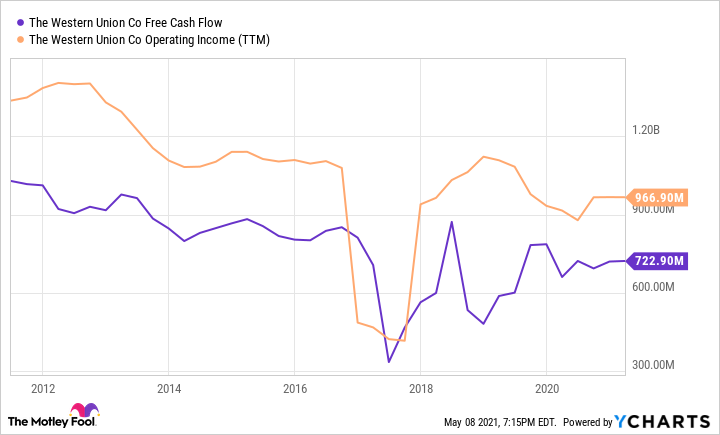 On the less positive side, Western Union hasn't managed to grow its operating income or free cash flow over the past five or 10 years. If the company isn't earning more money, then it will be difficult to increase its payout to shareholders in the future. However, cash flow does appear to be relatively stable, so there probably isn't a significant risk of the dividend going away. Western Union also maintains an investment-grade credit rating, which signals that the company is in relatively good financial health.

Western Union is a storied company that continues to push forward and find ways to be relevant in a world ruled by digital payments. The company is well-positioned to continue building its digital business and serving its customers in new ways. Investors may benefit from the upside of Western Union's investments in this arena.

At the same time, Western Union offers an attractive dividend yield which has grown over time. While it's not a sure thing, investors can probably bet on the dividend staying in place and maybe continuing to grow. This is a nice setup for investors who are interested in dividend income but also want exposure to growth from fintech expansion.

Why Shares of Western Union and MoneyGram Jumped Today