Please ensure Javascript is enabled for purposes of website accessibility
Log In Help Join The Motley Fool
Free Article Join Over 1 Million Premium Members And Get More In-Depth Stock Guidance and Research
By Keith Speights - May 26, 2021 at 4:55AM

It's a definite maybe.

They say that the third time's the charm. And a third time just might be in store for many Americans when it comes to COVID-19 vaccination.

Both the Pfizer (PFE -1.40%) and Moderna (MRNA -5.06%) vaccines require two doses for full immunization against SARS-CoV-2, with the second dose coming three or four weeks after the first depending on the vaccine. Two doses of either of these vaccines have been shown to provide high levels of efficacy. 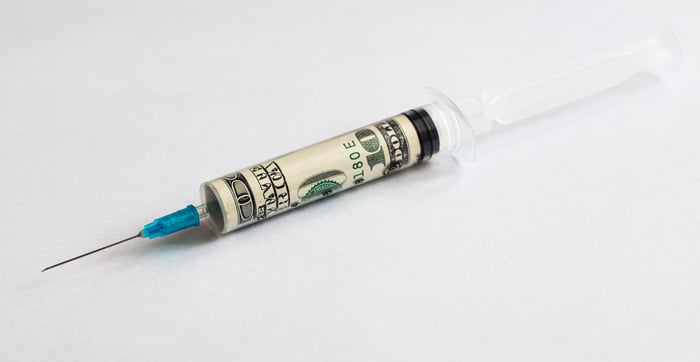 Axios reported last week that Pfizer CEO Albert Bourla believes a third booster shot will be needed sooner rather than later. Bourla stated at an Axios-sponsored event: "The data that I see coming, they are supporting the notion that likely there will be a need for a booster [after] somewhere between eight and 12 months."

Pfizer's COVID-19 vaccine received U.S. Emergency Use Authorization (EUA) on Dec. 11. Some Americans received their first dose of the vaccine over the next few weeks, with their second shot administered in January. Bourla's view implies that these individuals would need a third shot as early as September.

Moderna CEO Stephane Bancel is on the same page as Bourla. Bancel stated in an email to Axios, "I think as a country we should rather be two months too early, than two months too late with outbreaks in several places." He added, "People at highest risks (elderly, healthcare workers) were vaccinated in December/January. So I would do [a] September start for those at highest risk."

Not everyone agrees with the Pfizer and Moderna CEOs. The official position of the Centers for Disease Control and Prevention (CDC) is that "the need for and timing for COVID-19 booster doses have not been established." The CDC doesn't currently recommend a booster dose.

Dr. Anthony Fauci, President Biden's chief medical advisor and longtime director of the U.S. National Institute of Allergy and Infectious Diseases, is also much more tentative than Bourla and Bancel. Fauci stated recently: "We're preparing for the eventuality that we might need boosters, but I think we've got to be careful not to let the people know that inevitably, X number of months from now, everyone's going to need a booster. That's just not the case."

Cornell virologist John Moore took a stance similar to Fauci's in his comments to Axios, saying that "It's not proven that we need boosters yet." He added: "As of now, we don't have any evidence that protective immunity has dropped to a troubling point, and certainly not for people immunized in December, January, [or] February."

An agenda at work?

Interestingly, Moore stated, "Whereas it's appropriate to plan for boosters, you've got to look at whether there's a corporate agenda behind this." Could the CEOs of Pfizer and Moderna have, as Moore seems to suggest, an agenda of trying to boost their COVID-19 vaccine sales by promoting a booster dose earlier than is warranted?

To be fair to Bourla and Bancel, a big part of their jobs is to increase sales. If a third booster dose is needed relatively soon, it would likely translate to more supply deals for both Pfizer and Moderna. If the two CEOs don't promote the best interests of their companies, they're going to make many shareholders angry.

It's also possible that the Pfizer and Moderna CEOs are indeed seeing data that could back up their views. Maybe they simply have information at their disposal that isn't widely known yet. At least one healthcare expert seems to have a similar take to those of Bourla and Bancel.

U.S. Surgeon General Vivek Murthy said in a CNN interview last week: "We have to see how long the protection lasts. We know it lasts at least six months, but we'll have to see. It's very possible, though, and people should be prepared for the fact that we may need a booster within a year."

A matter of timing

Probably the most important thing for investors to understand is that the disagreements about booster shots primarily relate to the timing of the doses. It seems likely that booster vaccines will be required at least on an annual basis.

Assuming annual vaccinations are required, both Pfizer and Moderna should be able to count on significant sales of their vaccines for years to come. Pfizer's valuation doesn't appear to reflect this possibility, with the big pharma stock trading at only a little over 12 times expected earnings. Moderna's forward earnings multiple of 8 is even lower than Pfizer's.

A third booster shot would help both Pfizer and Moderna. But selling their COVID-19 vaccines year in and year out would be the real charm for these two stocks.