Please ensure Javascript is enabled for purposes of website accessibility
Log In Help Join The Motley Fool
Free Article Join Over 1 Million Premium Members And Get More In-Depth Stock Guidance and Research
By Jeremy Bowman - May 26, 2021 at 4:16PM

Shares of the online styling service caught a tailwind from the meme stock rally today.

Shares of Stitch Fix (SFIX 13.77%) were gaining today even though was no news out on the online personalized styling service. Instead, a short squeeze that began with so-called meme stocks like GameStop and AMC Entertainment has spread to other stocks with significant short interest like Stitch Fix. 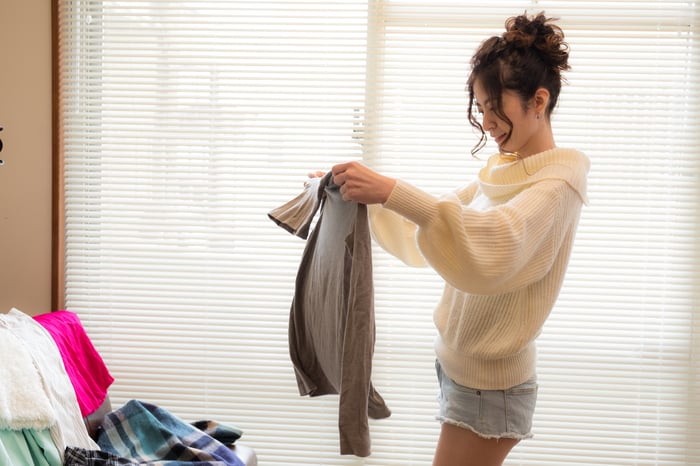 As of May 14, 22% of Stitch Fix's float was sold short, and the stock plunged after its most recent earnings report in March as it missed its own revenue guidance. Stitch Fix has historically been a battleground stock, often making double-digit movements on its earnings reports because it has disruptive potential with its data science-based model of recommending clothes, but a number of investors are skeptical that the business will ever take off, which explains the high short interest.

It's not surprising to see the stock gaining today in tandem with meme stocks, as a similar rally took place earlier this year. Stitch Fix shares rallied to an all-time high of $113.76 on Jan. 27, precisely when GameStop and AMC were both surging to all-time highs. Meme stock investors seem to be executing the same playbook today and are trying to force a short squeeze at Stitch Fix by bidding the stock higher.

The meme stock movement has taken the market by surprise, but it's difficult to predict how the latest rally will play out. It could fizzle like the last one. Stitch Fix investors are better off focusing on the company's fundamentals and the prospects of new features like its Direct Buy program, which is set to open up to new customers at the end of July.

The next major event for the company will be its third-quarter earnings report on June 7. The analyst consensus is for revenue to increase 25.5% to $510.5 million and for a per-share loss of $0.27 on the bottom line. Expect the stock to move one way or another on the report.