Please ensure Javascript is enabled for purposes of website accessibility
Log In Help Join The Motley Fool
Free Article Join Over 1 Million Premium Members And Get More In-Depth Stock Guidance and Research
By Jeff Little - May 27, 2021 at 9:44AM

Gamers are still gaming. Now we need the market to play along.

Investors are on the lookout for long term investment opportunities in online betting and gaming, a massively growing industry. However, identifying the best players in the industry and the inherent risks associated with uncertain growth can be daunting. In a recent article, I suggested exchange-traded funds (ETFs) that might help lessen the risk of investing in that sector, and I focused primarily on ETFs that have holdings in sportsbooks, online gambling platforms, and technology infrastructure.

That said, if you're interested in getting a piece of the action specifically in gaming with more holdings related to publishers, game developers, and equipment companies, but aren't sure which companies might come out ahead, here are a few more ETFs that might suit your portfolio. 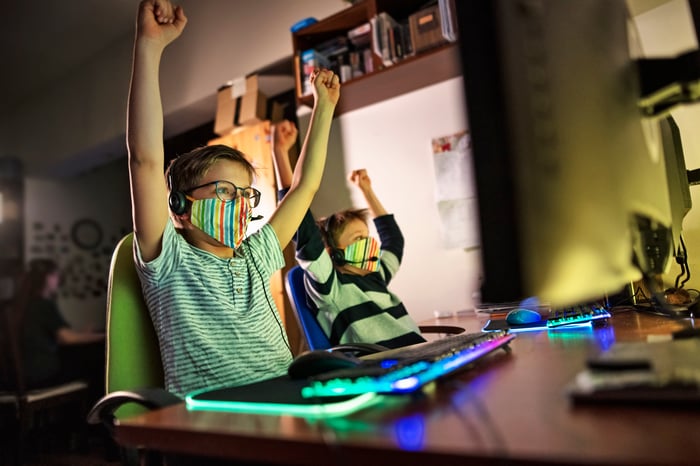 The VanEck Vectors Video Gaming and eSports ETF (ESPO 1.23%) provides investors with top holdings in some extremely successful U.S. companies, such as semi-conductor leaders NVIDIA and Applied Micro Devices, in addition to game publishers, including Activision, Electronic Arts, and Take-Two Interactive. Other international holdings of well-known companies in the gaming space include Tencent Holdings and Nintendo.

The ETF asset weight in ESPO is spread fairly evenly, with the top 10 holdings all in a range from 4.5% to 9%. Globally, the holdings are spread out as well, with the highest percentage of companies located in the U.S., followed by Japan, and China leading the rest of the group.

The ESPO ETF is a newbie in the history of ETFs, having only been around since 2018, but of the three this article focuses on. it's actually the oldest. So the tracking of performance is somewhat limited. Having said that, it is coming off a year in which it saw a 69% total annual return. In a more recent view, it has claimed a 4% return in the past month after a slow start to 2021. By comparison, the S&P 500 is leading the ESPO ETF by an 11% to 1% count for year-to-date returns.

A hero in the making

A similar option to ESPO is the creatively labeled ticker symbol, HERO. The Global X Video Games & Esports ETF (HERO 1.15%) has its key holdings focused on many of the same top 10 holdings as ESPO. In fact, seven of the 10 are the same, with one difference worth mentioning: HERO has a 5% asset weight in Zynga (ZNGA), a Motley Fool recommended stock.

Like ESPO, HERO's top held companies are located primarily in the U.S. and Japan, with China and South Korea leading the rest of the group. The sector weight differs from ESPO. Notwithstanding the similarities in top 10 holdings, HERO has an evenly spread sector weighting, with consumer discretionary, communication services, and information technology all coming in at above 30% weight. By comparison, ESPO focuses primarily on communication services, at a rate of 71%, followed by information technology at 24%.

HERO has experienced slightly better performance for the past year, gaining 84% in total returns and a 67% total return since inception. But HERO is even younger than its VanEck counterpart, having only been around since October of 2019.

Rounding out our three ETFs is The Roundhill BITKRAFT Esports & Digital Entertainment ETF (NERD 1.60%), also quite new on the scene for ETF investing. The fund has been around since June 2019, and is designed to follow the performance of the Roundhill BITKRAFT Esports Index. The index focuses its portfolio on companies in competitive video gaming, including publishers, streaming network operators, league operators, and hardware companies.

NERD has been popular in its total returns, resulting in a 127% growth across the past year, and 52% since inception. Although it doesn't boast names like NVIDIA or Nintendo in its top 10 holdings, it does have similarities to its counterpart ETFs. Most notably, its highest asset weight belongs to Activision. It also likes Tencent, Electronic Arts, and Take-Two.

Where it differs is in its second and third leading holdings, Modern Times Group and Corsair Gaming. They are each at 5% weight, which both had excellent growth from the dip in early 2020 and through the end of the year.

But 2021 is telling the same not-so-great story that it did for ESPO and HERO. Year-to-date returns are basically flat to negative, and the trend has been heading downward. With both Modern Times Group and Corsair on a downward trend as individual stocks, it could be a bitter pill for investors to swallow if these don't turn around soon or a change is made to the asset weight per holding.

As we've experienced global lockdowns for the past year, a massive jump in performance of the MVIS Global Video Gaming and eSports Index has taken place. Dating back to the second half of 2018, the Index was up 29% as of the start of the public pandemic in the U.S. Since then, it has grown to 113% as of January of this year. By comparison, the S&P 500 was up 25% in early 2020, growing to 40% in January.

The number of gaming players and revenue generated from gaming have been growing tremendously over the past few years. This is expected to continue at even larger increments through 2023, based on a 2020 Newzoo global esports market report. Revenue is expected to climb by 25%, to $217 billion, while the number of global players is projected to spread at a rate of 14%, bringing the total number of players to over three billion.

For those who might look at dividends as a deciding factor, NERD tops the list with a payout of $0.32 in 2020, following $0.05 in 2019. HERO comes in second with a $0.21 annual dividend, after paying $0.04 the previous year. And ESPO places third, but with more consistency, paying an annual dividend of $0.09 for the past two consecutive years.

Two obstacles to overcome are that the short-term trend is not all that enticing, based on the recent ETF returns, and that it's yet to be certain how the the post-pandemic world will affect companies that performed well, such as some in gaming, during lockdowns. Second-quarter numbers should help provide some additional direction.

For investors looking longer-term, three to five years out, grabbing a trial size of shares in one of these gaming ETFs could be the way to go for now. If you're looking for a good mix of holdings, recent returns, dividend consistency, and age, ESPO might be a good start.