Please ensure Javascript is enabled for purposes of website accessibility
Log In Help Join The Motley Fool
Free Article Join Over 1 Million Premium Members And Get More In-Depth Stock Guidance and Research
By Will Healy - May 27, 2021 at 7:53AM

Which clothing retailer will sew up higher investor returns?

Although Costco (COST 0.23%) and Stitch Fix (SFIX 13.77%) compete with one another, the two companies show few commonalities. One acts as a large, generalized retailer, while the other focuses exclusively on clothing choices tailored explicitly for individuals. That difference may ultimately drive higher returns for one of these consumer-focused companies. 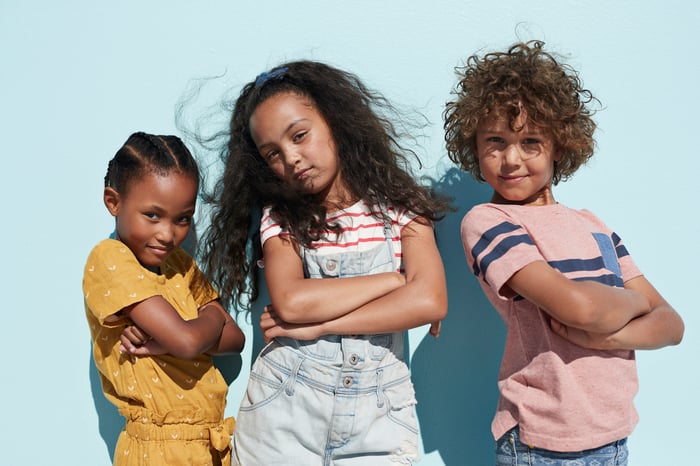 Indeed, size affects how the two companies compete. As a mega-retailer with a $170 billion market cap, Costco depends partially on clothing sales and promotes its "quality customized apparel everyone will love."

It will then utilize the same competitive advantage it uses for its non-clothing items. By paying a membership fee, consumers gain access to a wide variety of high-quality items priced for little more than the cost of goods sold plus overhead.

In contrast, Stitch Fix, which supports a $5 billion market cap, stands out in this highly competitive industry by combining low-cost styling advice with items that match one's desired look. Stitch Fix utilizes a style quiz along with artificial intelligence (AI) and the input of a personalized stylist to determine one's appropriate choices. It charges a $20 styling fee for this service but credits the $20 toward purchases.

While it may not compete with Costco as aggressively on price, it gives its customers individual guidance on styles that they would not receive from Costco. Moreover, since it only operates in the U.S. and U.K. currently, it has barely begun to develop an international footprint. Additionally, company president Elizabeth Spaulding, who led the international expansion, will take over the CEO position from founder Katrina Lake in August. This could bode well for Stitch Fix as it enters new markets.

Despite their extreme differences, the financials appear to reflect company life cycles better than business approaches. Costco's predecessor opened its first store 45 years ago and has since expanded to 809 locations on four continents. The consumer staples stock has continuously reported profits since the mid-1990s. Conversely, Lake founded Stitch Fix in 2011, and it launched its IPO in 2017. Since its founding, it has served millions of customers and has reported a profit in three out of the last five years.

Not surprisingly, Costco fared somewhat better financially as it increased revenue by 9% in fiscal 2020 and net income by 9% during that period. For the first six months of fiscal 2021, revenue rose to $88 billion, a 16% increase compared with the same period in 2020.

Net income of $2.1 billion rose by 19% during that time as growth rates in operating expenses and income taxes slightly lagged its revenue increases. Costco did not offer any guidance for future quarters.

Due to rising selling, general, and administrative expenses related to increased compensation and benefits costs, Stitch Fix reported a loss of $67 million in fiscal 2020. This occurred despite revenue rising by about 8.5% over 2019 levels to more than $1.7 billion. The trend continues for the consumer discretionary stock as revenue increased to $995 million in the first six months of 2021. This amounts to an 11% increase compared with the same period last year.

The revenue surge did not stop Stitch Fix from losing $11 million in net income during that period, a drop from the $11 million profit reported during the first six months of 2020. The company offered no indication it would turn profitable this year despite the forecast of an 18% to 20% revenue increase for the rest of fiscal 2021.

Nonetheless, Stitch Fix stock has begun to outperform that of Costco. It has increased in value by 106%, while Costco has climbed by about 28%, slightly lagging the S&P 500's 42% gain. Investors should note that Stitch Fix outperformed despite the stock losing half of its value due to missed guidance in the second quarter and its CEO's resignation announcement. 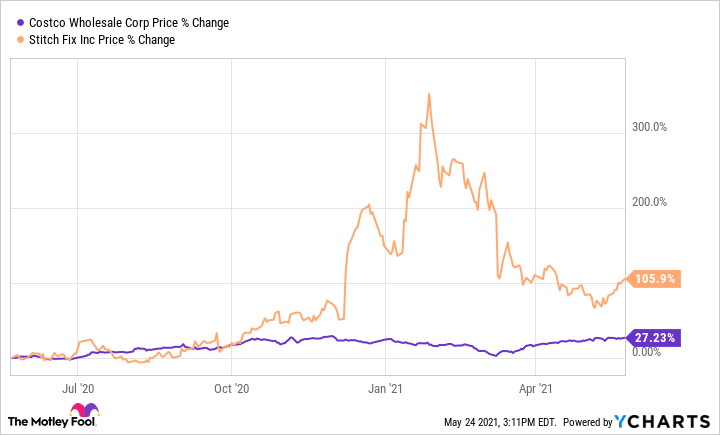 Nonetheless, even with that decline, Stitch Fix remains the more expensive stock. Stitch Fix sells for about 2.8 times sales, while Costco's price-to-sales ratio remains under one.

Despite the higher valuation, Stitch Fix stock will likely outperform that of Costco. Not only does Stitch Fix offer faster revenue increases, its more modest revenue levels and smaller international footprint mean it has not yet realized much of its potential growth. Moreover, with its next CEO already leading expansion efforts, Stitch Fix increases the likelihood of a smooth leadership transition.

Admittedly, Stitch Fix may never grow as large as Costco. Some analysts consider Costco a "forever stock," and more risk-averse investors might feel more comfortable with the warehouse retailer. Nonetheless, investors seeking the most growth will more likely thread that needle with Stitch Fix.