Please ensure Javascript is enabled for purposes of website accessibility
Log In Help Join The Motley Fool
Free Article Join Over 1 Million Premium Members And Get More In-Depth Stock Guidance and Research
By Leo Sun - May 27, 2021 at 8:37AM

The data mining firm wins another government contract -- but it probably won't silence the bears.

Palantir (PLTR 5.20%) recently announced it will support the U.S. Space Force and Air Force's "critical missions" with cloud-based data services in a new $32.5 million contract. The new deal will expand its existing partnerships with both agencies.

Palantir will also crunch data for NORAD-NORTHCOM's Joint All Domain Command and Control (JADC2) upgrades, which focus on "ingesting and modeling high-scale data" for planning and executing military missions.

This sounds like another positive development for Palantir's government-facing business, but will it bring some bulls back to a stock that lost about 20% of its value over the past three months? 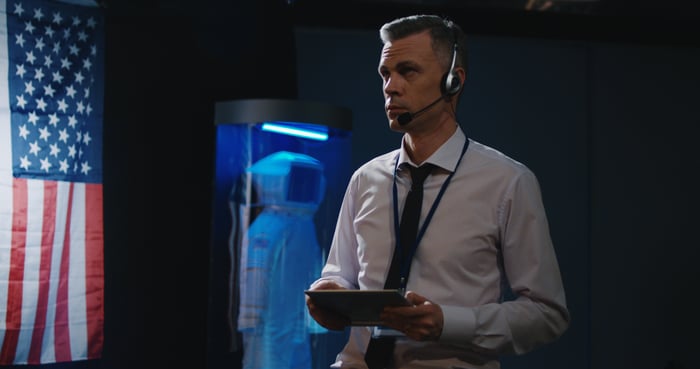 Why did Palantir's stock tumble?

Palantir, which derives its name from the all-seeing orbs in The Lord of the Rings, enables government agencies and companies to gather and analyze data from disparate sources.

Its Gotham platform mainly serves U.S. government agencies, and it boldly declared it would become the "default operating system for data access across the U.S. government" in its S-1 filing last year. Its Foundry platform provides similar tools to private companies and organizations.

Palantir generated 56% of its revenue from government customers last year, while the remaining 44% came from commercial customers. Here's how fast those businesses grew in 2020 and the first quarter of 2021.

Palantir's growth rates are impressive, but three issues are holding the stock back. First, it trades at nearly 30 times this year's sales, which could limit its upside potential as the market rotates from growth to value stocks. It expects its annual revenue to grow at least 30% between 2021 and 2025, but those long-term estimates might not justify its frothy valuations.

Lastly, some investors believe the long-term growth potential of Palantir's government business is limited. They claim it must expand its commercial business to grow into its valuations, but that it faces too many entrenched competitors in the AI-powered enterprise analytics space.

Strengthening its core business, but not silencing the bears

Palantir's new Space Force and Air Force deal will complement its growing list of new and expanded U.S. government contracts, which already include deals with the U.S. Army, the Food and Drug Administration, the Central Intelligence Agency, and Immigration and Customs Enforcement.

That's good news for Palantir since its revenue from U.S. government agencies surged 83% year over year last quarter and accounted for the lion's share of its government revenue. But it also doesn't really counter any of the bearish arguments against the stock.

Palantir's government deals also remain opaque and controversial. Its technology was reportedly used to locate and kill Osama Bin Laden in 2011, but ICE also deployed its tools to track and deport undocumented immigrants under the Trump administration.

That mixed reputation -- which sparked protests in the past -- might prevent some companies from using Palantir's Foundry platform, especially when less controversial companies like C3.ai, Alteryx, and salesforce.com all offer comparable data-crunching services.

I personally own a small position in Palantir, since I'm intrigued by its long-term growth potential. But the latest Air Force and Space Force deal only represents 2% of its projected revenue this year, so it won't move the needle or resolve its most pressing problems.

Is Palantir Stock a Buy Now?