Please ensure Javascript is enabled for purposes of website accessibility
Log In Help Join The Motley Fool
Free Article Join Over 1 Million Premium Members And Get More In-Depth Stock Guidance and Research
By Matthew DiLallo - May 28, 2021 at 10:04AM

An analyst is really bullish on the energy company's growth potential.

Vertex Energy's (VTNR 3.55%) stock price soared more than 48% by 10:30 a.m. EDT on Friday. Fueling the oil stock was a significant price target increase by an analyst following the company's purchase of a refinery from Royal Dutch Shell (RDS.A) (RDS.B).

Vertex Energy agreed to buy the Mobile refinery in Alabama from Shell for $75 million on Wednesday. It marked the "largest, most significant transaction ever completed by Vertex, one that positions us to become a leading regional supplier of both renewable and conventional products," according to comments by CEO Benjamin Cowart in the deal announcement. The company noted that upon completing an $85 million conversion of the facility's hydrocracking unit by the end of next year to produce renewable diesel, the refinery could generate $3 billion in revenue and $400 million in gross profit in 2023. 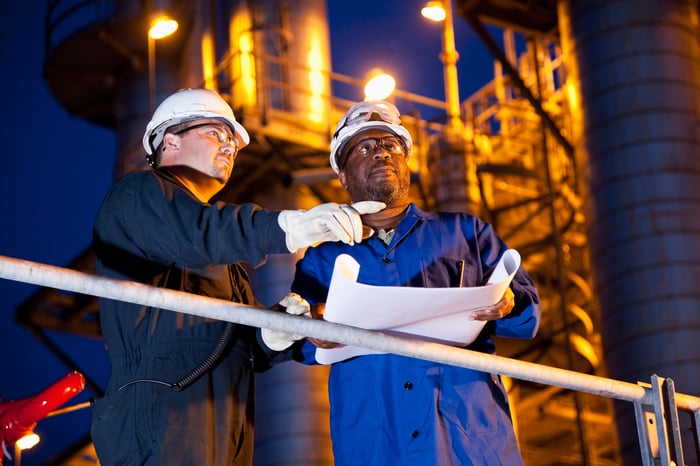 That deal led an analyst from H.C. Wainwright to set a $25 price target on Vertex Energy stock. That's more than six times yesterday's closing price. Fueling that big boost in the price target was the "transformational" refining deal. That transaction led the analyst to boost Vertex's 2023 revenue estimate from $246 million to $2.9 billion. The analyst now sees Vertex Energy generating $319.7 million in adjusted EBITDA that year, a more than 10 times improvement over the next two years from the current level.

Vertex Energy has a bold vision for Shell's Mobile refinery. It aims to diversify the site to produce a range of refined products, including renewable diesel, to support the energy transition to low-carbon alternatives. If successful, the transformation transaction could generate significant earnings growth for the company.