Please ensure Javascript is enabled for purposes of website accessibility
Log In Help Join The Motley Fool
Free Article Join Over 1 Million Premium Members And Get More In-Depth Stock Guidance and Research
By Rich Smith - May 28, 2021 at 10:38AM

Virgin Galactic lost half its value after February's flight delay. But now it's not delayed anymore.

Shares of space tourism pioneer Virgin Galactic (SPCE 2.06%) are looking to close the week on a high note Friday -- up 8.3% already at 10 a.m. EDT, after spiking more than 15% yesterday. 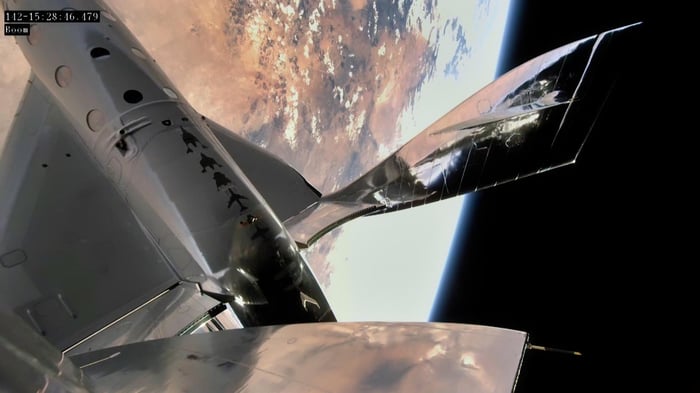 Over the course of the two-and-a-half-minute clip, Branson argues that space travel that once was considered "science fiction" is now a reality, and predicts that "hundreds of thousands of people" will fly to space and back on Virgin Galactic spaceplanes "by the end of this century."

Breathtaking: the story of @VirginGalactic's first spaceflight from New Mexico. Very proud moment being there with the team https://t.co/8e6XB6bfeb #UNITY21 #VirginFamily pic.twitter.com/1gWqQTPpe9

Does such enthusiasm, all in response to a promotional video, make sense? In at least one sense, it might.

Consider that from Feb. 25, the day before Virgin Galactic dropped the bombshell about delaying flight tests until May, through Friday last week -- the day before it finally returned to space -- Virgin Galactic stock declined by literally 50%. But given that VSS Unity is now proven to be flying well again, all that has really changed about Virgin Galactic's business is that it's lost three months' time progressing toward its goal of launching commercial operations, and three months of future revenue from those operations.

But does a single quarter's delay really justify a 50% haircut to Virgin Galactic's stock price? Investors seem to think it does not, and that's why they're bidding the stock steadily back toward where it traded three months ago.