Please ensure Javascript is enabled for purposes of website accessibility
Log In Help Join The Motley Fool
Free Article Join Over 1 Million Premium Members And Get More In-Depth Stock Guidance and Research
By Taylor Carmichael - May 30, 2021 at 6:11AM

Nano-X is not a safe investment -- it's a highly risky one. But its potential upside is incredible.

Nano-X Imaging (NNOX -1.77%) is a stock with high risk that might give investors a high reward. If you buy $10,000 worth of shares in Nano-X, you might lose it all. But it's also entirely possible the stock might go up 100 times in value.

The maker of a new kind of X-ray devices currently has a market valuation of a little over $1 billion. To achieve a 100-bagger, that number would have to reach $100 billion in the future. Is that possible? Sure. Many healthcare companies have achieved that milestone, including biotech stocks like Gilead Sciences and Amgen. It took a few decades for those companies to pull it off, but it's definitely possible. Here's how Nano-X might make you a millionaire over the next 30 years. 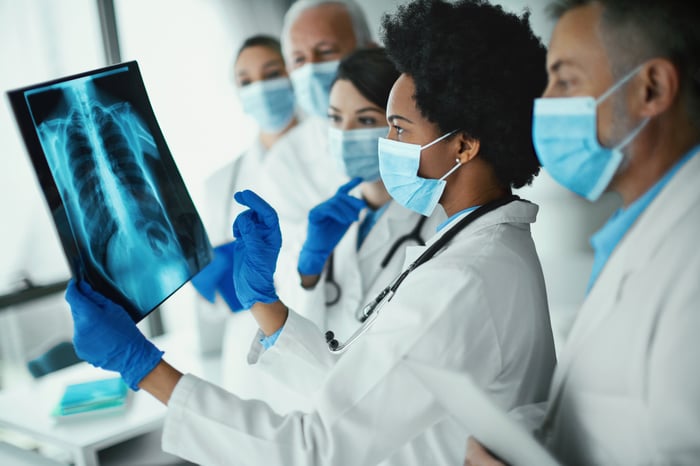 The biotech industry is one of the riskiest sectors in the stock market. That's because a lot of biotechs don't have any drugs or medical devices on the market yet. And Nano-X is one of those companies. As a consequence, Nano-X not only has no profits, it doesn't even have revenues yet.

Why is that? In a word, regulation. The healthcare sector is heavily regulated by the federal government. Before Nano-X can sell its X-ray device to hospitals, it must first get the device cleared by the U.S. Food and Drug Administration (FDA) and medical authorities in foreign countries. In April, Nano-X made a giant step forward in that regard when it received FDA clearance for its X-ray device.

That's just the first step for the company. FDA clearance means that the company's single-source X-ray system works. But Nano-X must also receive FDA clearance for its multi-source X-ray device, which is the one that will compete with all the MRI (magnetic resonance imaging) and CAT (computed axial tomography) scans on the market today.

The company expects to receive two more clearances from the FDA over the next several months, one for its multi-source X-ray device and the other for its cloud-based software system that will digitally store the X-ray images. And while there have been some manufacturing delays, Nano-X expects to ship 1,000 devices in 2022, possibly more.

Yes, that's right -- revenues! And what's wonderful about the biotech sector is that when a company receives the go-ahead from the FDA, what was once a big negative (the regulatory roadblock) becomes a big positive. The FDA process keeps many competitors at bay, and often gives a biotech company a monopoly or near-monopoly for years and years.

Nano-X must win in the marketplace

If Nano-X receives its FDA clearances as expected, the tiny upstart will have to compete with giant legacy players in the X-ray market. This includes big names like General Electric (GE -1.88%), Philips (PHG -1.27%), and Siemens (SIEGY -2.53%). Despite its small size, Nano-X has big advantages in that regard.

That's because Nano-X has made an amazing scientific advance that has gotten a lot of investors excited about the stock. Specifically, the company has discovered a new way to power up the X-ray.

The source technology for an X-ray has not changed since Wilhelm Rontgen discovered the X-ray over 120 years ago. The process involves heating up a metal filament to 2,000 degrees Celsius to produce the electron streams necessary for an X-ray.

Nano-X has discovered a cool way to produce the electrons without all that heat, using nanotechnology. The company's X-ray device is powered by 100 million nano-cones on a silicon chip about the size of your fingertip. Without having to produce massive heat to run the X-ray, the company's solution is a lot smaller and a lot cheaper. The cost reduction is significant -- from $150,000 for a legacy cathode tube all the way down to an estimated $100 for Nano-X's tube, once it's in mass production.

This cost savings translates into an X-ray device that will cost about $10,000, as opposed to the $1 million-plus that hospitals now pay for MRI machines and CAT scans. Nano-X's management believes that this low price will dramatically increase the use of X-ray technology around the world.

What makes investors really excited is the company's business plan. Nano-X plans to deliver its devices at cost or below cost and make money on the use of the device. Nano-X will get paid a percentage every time a device is used. So the company will have recurring revenue streams, much like software-as-a-service (SaaS) companies enjoy today.

In an interview with The Motley Fool, CEO Ran Poliakine outlined the business plan: "So the total cost of a scan for the system, for the patients, for me, depending on the country, could get as low as $40, which is dramatically less than the world average." Distributors of the Nano-X device will have to commit to a minimum of seven X-ray scans a day, with Nano-X receiving $14 per scan, or roughly $100 a day per machine.

In the first wave of deployments, Nano-X expects to place 15,000 devices out in the world by 2024. If Nano-X achieves its ambitious goals, the company will be collecting $1.5 million every day from the use of its device. Major manufacturers like SK Telecom (SKM -0.70%), Fuji (FUJIY -1.57%), and Foxconn (the manufacturer of the iPhone) are on board and ready to go.

Is this stock a sure thing? Not at all. The company might fail -- it happens all the time. But if Nano-X succeeds, it will dramatically improve healthcare around the world, and make early investors a lot of money. It might even make a few millionaires along the way.