Please ensure Javascript is enabled for purposes of website accessibility
Log In Help Join The Motley Fool
Free Article Join Over 1 Million Premium Members And Get More In-Depth Stock Guidance and Research
By Jim Halley - May 31, 2021 at 8:20AM

These three lumber REITS provide a dividend that's a cut above the rest.

The cost of lumber has increased 300% over the past 12 months, according to National Home Builder Association statistics. The reason is simple economics -- increased demand and limited supply. When the pandemic first began, home construction came to a standstill and a lot of sawmills and lumber processing facilities shut down. Then, the boom in remodeling and home building started early last summer and the mills went from having too much wood to not enough very quickly.

The demand has shown no sign of ebbing and trees take time to grow, so the supply side will keep lumber costs high for a while. Another reason why lumber supplies are down is that mills can't keep up with processing the wood that is being felled. On top of that, the rise in lumber costs may likely rise because the U.S. Commerce Department last week said it would like to increase tariffs on Canadian lumber from 9% to 18.32%.

This provides a great opportunity for investors to get in on what is likely to be growth trend for a while. Even better, these three timber real estate investment trusts (REITs), CatchMark Timber Trust (CTT 0.45%), Rayonier (RYN 0.27%) and PotlatchDeltic (PCH 0.38%) all offer a dividend yield of at least 2.7%. 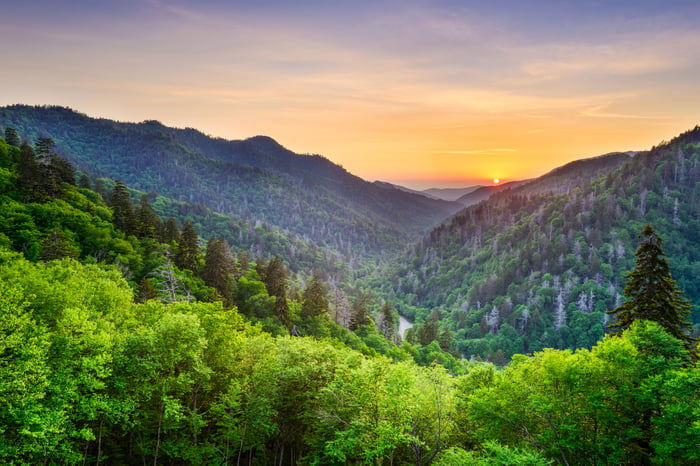 PotlatchDeltic's balance gives it an edge

Unlike the other two REITs, PotlatchDeltic is on both sides of the timber industry. It owns 1.8 million acres of timberlands in Alabama, Arkansas, Idaho, Mississippi, Louisiana, and Minnesota, but through its taxable subsidiary, it operates a plywood mill and six sawmills.

While lumber prices can be volatile, the company has increased its EBITDA margin by 86.5% over the past three years since Potlatch merged with Deltic Timber in 2018. So, it appears to not only have become a larger company, but also one that is more efficient. 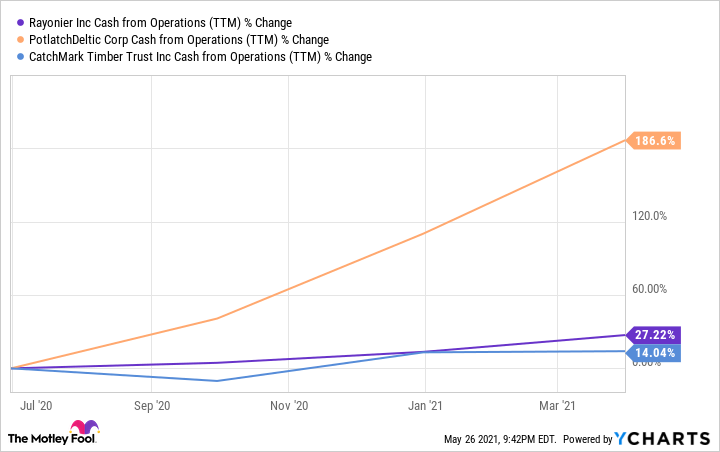 CatchMark is a timber REIT that owns 1.5 million acres of timber land. Timber REITs buy land, grow trees, sell the harvested trees or the land, and then do it again. The beauty of timber REITs is they utilize a renewable resource.

CatchMark's stock is up more than 56% over the past 12 months and more than 12% this year. In the first quarter, the company's reported revenue was $27.7 million, up 7% year over year, while the company reported a net loss of $0.6 million, which was an improvement of 87% over the same period in 2020. The company had $12.9 million in adjusted EBITDA, which was flat year over year.

CatchMark, which owns forests in the South and Pacific Northwest, has a quarterly dividend of 1.35 cents per share, which works out to a current yield of 4.46%. The dividend is well covered. In the first quarter, the company distributed $6.6 million in dividends but had $11.6 million in cash from operations, which was up 3% year over year.

Rayonier's size gives it an edge

Rayonier is the second-largest timber REIT behind Weyerhaeuser, with 2.7 million acres of timber land in the United States and New Zealand. The company's stock is up more than 55% over the past 12 months and more than 27% this year.

The company offers a quarterly dividend of $0.27 per share, which works out to a yield of 2.84%. What is also exciting is the company is finding a variety of uses for its timberland, such as renting out locations for bee keepers or installing a wind farm on a ridge.

Rayonier completed its purchase of Pope Resources in May 2020 for $554 million, giving Rayonier a larger timberland presence in the Pacific Northwest. In the first quarter, that segment was a bright spot for the company with an adjusted EBITDA of $17.6 million, up 81% year over year.

How long will the opportunity last?

It's reasonable to wonder if it's too late to be buying into timber REITs and whether a boom year ahead has already been priced in at the stock market. The rise in lumber prices caught a lot of people off guard and they could just as easily fall. However, the potential addition of tariffs on Canadian wood is a new wrinkle that could help keep U.S. timber prices high. There's also a pretty big moat regarding timber. Lumber companies can't suddenly increase production, so supplies will likely be tight for a while.

Of the three dividend stocks, I like PotlatchDeltic because of its balance and overall financial strength, not just this year, but for the past three years. I also like CatchMark because of its superior dividend that's well covered by its cash from operations. It has also shown a nice uptick in revenue that looks as if it will continue this year. Rayonier's falling revenue is a concern and one reason why I prefer the other two REITs, though its purchase of Pope Resources seems to be paying off.

The 3 Stocks to Watch in Lumber

Is Weyerhaeuser More at Risk Than Plum Creek Timber and Potlatch?