The White House's plans to address the U.S. opioid crisis could be good news for Heron Therapeutics and Collegium Pharmaceutical, makers of safer pain management drugs.

Among all of the overwhelming and depressing statistics associated with the coronavirus pandemic, here's one number that has sometimes been overlooked: 81,003 people in the U.S. died from drug overdoses in the 12-month period that ended in June 2020. That was a 20% year-over-year increase to a record high, due largely to a sharp surge in overdose deaths after COVID-19 struck. The combination of the added stressors of the pandemic and addicts' inability to access support and treatment proved devastating to many.

That's just one reason President Biden's recent budget proposal calls for $10.7 billion to fight the country's opioid addiction crisis. His proposal focuses on at-risk communities, and increases funding for everything from prevention to recovery programs. If the president gets his way, Heron Therapeutics (HRTX -5.52%) and Collegium Pharmaceutical (COLL -1.17%) should benefit. They each have treatments in their portfolios that could play a role in helping the 1.6 million Americans with opioid use disorder curb their addictions, and help prevent others from becoming addicted at all. 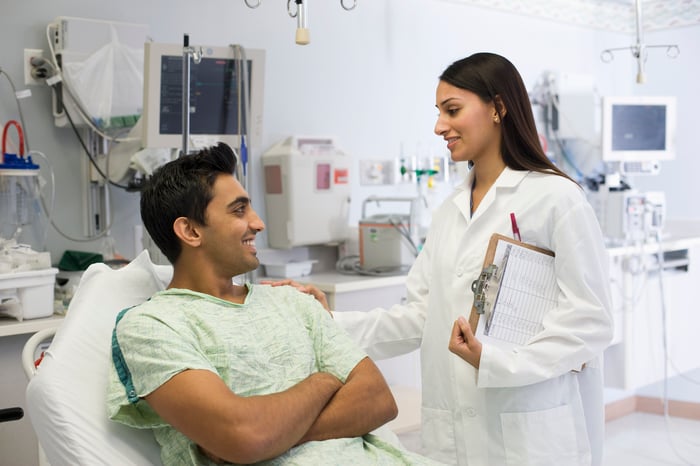 Entering last month, Heron Therapeutics had two FDA-approved drugs on the market. Both were designed to treat nausea in cancer patients. But in mid-May, the Food and Drug Administration gave the green light to Heron's post-surgical pain relief drug Zynrelef. The therapy combines a local anesthetic with an anti-inflammatory drug, and is administered as part of the surgical process. The delayed-release medication provides pain relief for 72 hours after surgery. Heron management believes this is key in helping post-surgical patients avoid the use of opioid pain medications.

The FDA approval was given for a limited set of surgeries: bunionectomy, total knee replacement, and a type of hernia repair. Those account for more than 2.1 million procedures annually, with 60% of those performed in an outpatient setting. Management has indicated it sees the potential for Zynrelef to hit $450 million in annual sales. Heron's other pain management candidate, HTX-034, recently entered phase 2 clinical trials. It aims to extend the pain relief to five to seven days.

Given a boost from a federal budget that includes significant funds for research and raising awareness about addiction, Heron's opioid alternatives could quickly gain wide adoption in the medical community. Beyond public service campaigns and a speedier approval process, agencies like the Centers for Medicare and Medicaid could create incentives for surgeons to use opioid alternatives like Zynrelef. There could also be regulatory support for its use in additional indications. There is already a precedent for Zynrelef's use beyond those initial surgeries approved by the FDA. The drug is authorized in 31 European countries for small- to medium-sized surgical wounds. All of this adds up to a significant opportunity for Heron Therapeutics to grow its sales.

Collegium wants to be the leader in responsible pain management. Although its drug Xtampza is a form of oxycodone, it's an extended-release version designed to resist chemical and physical manipulation. This makes it less amenable to common abuse methods such as heating and injecting, crushing, and chewing. The extended-release oxycodone market in the U.S. was approximately 2.4 million prescriptions and $1.4 billion last year. About 80% of those prescriptions went to Purdue Pharma's OxyContin product.

Amid Purdue's efforts to emerge from bankruptcy after pleading guilty to fraud and violating kickback laws, the company's proposal to funnel its future profits into fighting the opioid epidemic has been met with skepticism. That gives the Biden administration an even greater incentive to find alternative pain medications to support. Aiding the case for Collegium: A 2017 study showed Xtampza maintained its extended-release properties after being crushed while OxyContin tablets did not.

Collegium believes this puts its drug in a prime position to capture market share in the extended-release oxycodone market. The company can do that by getting its drug covered by more insurance plans. So far, matters are playing out much as management had hoped.

The company reported that its share of the extended-release market grew from 18.9% in 2019 to 25.1% last year. Xtampza was also added by a major national Medicare Part D plan and several regional commercial plans. If the next federal budget gives more resources to programs that promote safer methods of pain management, expect Collegium's momentum to continue.

Although the COVID-19 pandemic led to a surge in opioid overdose deaths, there have been glimmers of hope in the fight against the addiction crisis. After the Affordable Care Act expanded Medicaid and mandated that insurers cover mental health services and substance abuse disorders, the scales began to tip. Counties in states that expanded Medicaid coverage by 2017 had 11% fewer deaths per capita from heroin and 10% fewer deaths per capita from synthetic opioids (other than methadone) than counties in states that chose not to expand the program. In 2018, federal funding for drug treatment was boosted, and China was put on notice to curb its exports of Fentanyl -- a powerful synthetic opioid. Despite those actions, overall opioid overdose deaths rose from 33,091 in 2015 to 50,042 in 2019.

Biden's campaign platform included plans to attack the opioid abuse epidemic, in part by improving access to effective pain management. The products developed by Heron Therapeutics and Collegium Pharmaceuticals could be strong tools in that effort. As such, the pair could meaningfully contribute to solving a national health crisis, and reward their shareholders along the way.