Please ensure Javascript is enabled for purposes of website accessibility
Log In Help Join The Motley Fool
Free Article Join Over 1 Million Premium Members And Get More In-Depth Stock Guidance and Research
By David Jagielski - Jun 3, 2021 at 6:30AM

Curaleaf is the top cannabis company in terms of revenue -- but that may not be the case for much longer.

As more states legalize recreational marijuana, more opportunities for growth and expansion in the industry are opening up. Florida-based Trulieve Cannabis (TCNNF 1.23%) is showing that it plans to take advantage of those new opportunities. Trulieve recently announced it'd be acquiring Harvest Health, which has a strong footprint in the recently legalized adult-use market of Arizona.

However, investors shouldn't be surprised if there is more activity on the M&A front, especially from a fairly large marijuana company: Curaleaf (CURLF 1.24%). Curaleaf has often made big splashes and doesn't shy away from acquisitions. And with rival Trulieve getting bigger, is it only a matter of time before it announces a deal to strengthen its position atop the industry? 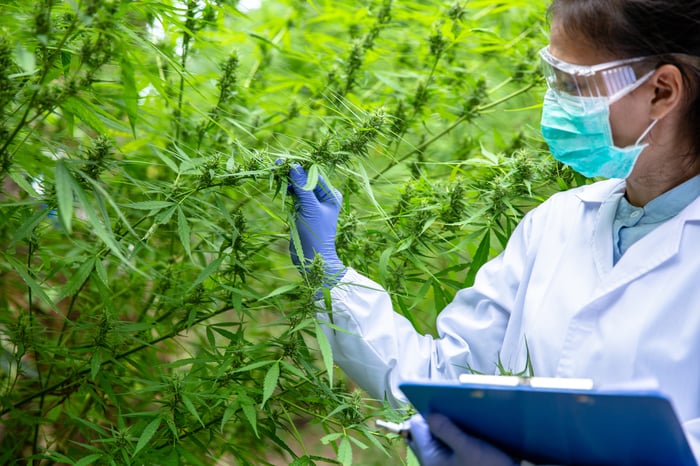 Curaleaf has been making more modest deals this year

Thus far in 2021, Curaleaf has announced a few acquisitions.

On March 9, the company signed an agreement to acquire Emmac Life Sciences Limited for a base consideration of $286 million (contingent consideration could total up to $57 million depending on the achievement of milestones). Emmac is based in Europe and gives Curaleaf a road into many attractive medical marijuana markets, including the United Kingdom, Italy, and Spain.

It's a strategic move for Curaleaf to diversify its operations outside of the U.S. and position itself for long-term growth opportunities on another continent. According to research company BDSA, the European cannabis market will grow at a compound annual growth rate of 42% between now and 2025 (while the U.S. grows at a rate of 18%).

On May 17, Curaleaf stated it would be acquiring Colorado-based Los Sueños, the largest outdoor grower in the state, for $67 million. Outdoor growing operations can be significantly cheaper than complicated indoor operations; this will help keep Curaleaf's costs down, which has been a key consideration for the company. The acquisition also increases its presence in the hot market of Colorado, which generated $2.3 billion in cannabis sales last year. This was second-most for the year behind California.

While these moves certainly aren't bad ones for Curaleaf, at around $400 million in total, they aren't what investors might expect from the booming business. In 2019, the company announced it was acquiring Cura Partners (which owned the Select brand) for $949 million to help grow its presence on the West Coast, in key markets such as Arizona, California, Nevada, and Oregon. Also in 2019, it acquired Grassroots for $875 million, which then expanded Curaleaf's footprint from 12 to 19 states.

Since those deals, New Jersey, New York, and Arizona have all legalized marijuana for recreational use and could become some of the hottest markets in the U.S. And while Curaleaf does have a presence in those states, there's been no big move to increase its footprint just yet.

Does it need to make more moves?

Curaleaf is the dominant pot producer in the world right now. With sales of $790 million over the trailing 12 months, the company looks well on its way to hitting the $1 billion mark in revenue. But over the same timeframe, Trulieve has recorded $619 million in revenue, while Harvest Health has posted sales of $276 million.

The Trulieve-Harvest Health acquisition looks like it will easily put the combined company over the top in revenue and establish itself as the industry leader. That can't be sitting well with Curaleaf. It was proud to announce in July 2020 that, upon the closing of its Grassroots acquisition, it was the "World's Largest Cannabis Company" (by revenue).

Now, its throne at the top looks to be in jeopardy -- which is why I suspect Curaleaf might be looking to make a move in response to Trulieve's latest acquisition. And it's not as if this would be an acquisition for the sake of an acquisition; with many new markets out there (besides the states mentioned earlier, New Mexico and Virginia have also legalized recreational marijuana this year), Curaleaf likely has plenty of enticing opportunities for expansion to choose from.

Whether Curaleaf needs to make a move is debatable. The company could keep itself busy just working on its existing operations and focusing on organic growth. But with Curaleaf's penchant for seeking out growth opportunities and desire to be on top, investors should keep a close eye on this multistate operator. An acquisition may not be far away.

Is Curaleaf a good investment today?

With operations in 23 states and more than 100 dispensaries, even if Curaleaf isn't the top company in revenue, it is still a big player in the cannabis industry. In 2020, its sales nearly tripled, rising from $221 million in the previous year up to $627 million.

The company could be a great investment for investors who are craving growth and aren't sure which pot stock to invest in, as it's likely to remain among the market leaders for the foreseeable future. Over the past 12 months, its stock has soared around 160%, easily outperforming the Horizons Marijuana Life Sciences ETF, which is up just 40% during that period.