Please ensure Javascript is enabled for purposes of website accessibility
Log In Help Join The Motley Fool
Free Article Join Over 1 Million Premium Members And Get More In-Depth Stock Guidance and Research
By Demitri Kalogeropoulos - Jun 4, 2021 at 8:00AM

The apparel specialist might change its tune on growth for a third time in a year.

Stitch Fix (SFIX -8.12%) shareholders have been on a wild ride over the last few months. The stock fell more than 50% after briefly crossing $100 a share in late January. Yet it has still more than tripled since the depths of the pandemic in early 2020.

The apparel retailer's last two quarterly reports told sharply different stories about the health of the business, which implies even more volatility ahead when Stitch Fix announces its fiscal 2021 third-quarter results on Monday, June 7. Let's look at the metrics that will determine which way this stock likely goes from here. 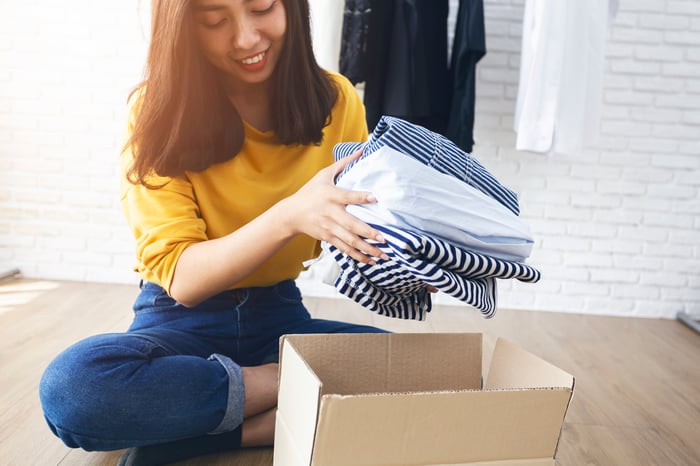 CEO Katrina Lake, while citing metrics like new user gains, said in early March that the fundamentals of the business are strong. Stitch Fix just enjoyed some of its best growth months on record, after all.

But the fiscal second-quarter report showed major weaknesses in the supply chain, mainly around shipping. It also demonstrated that the executive team didn't have a good read on shoppers' propensity to buy apparel using the new direct-buy option. Investors will want to see evidence on Monday that these challenges are being met.

They'll also want confirmation that the growth miss was driven by shipping delays and not weakening enthusiasm for Stitch Fix deliveries. The clearest sign on this score would be if sales hit at least the high end of management's guidance calling for between $505 million and $515 million of revenue.

We'll find out on Monday whether Stitch Fix could pass along higher prices just as easily as store-based rivals have in early 2021. Executives should also explain whether the men's business is rebounding as they predicted. Still, investors shouldn't expect to see much in the way of profits. Adjusted fiscal third-quarter EBITDA losses could be as high as $9 million, according to management's latest guidance.

The big question heading into Monday's report is whether Stitch Fix will significantly revise its outlook. Two quarters ago, that forecast was bullish. Last quarter, management dramatically shifted its tone, saying in a letter to shareholders, "[W]e are taking a more measured approach to our outlook," given all the challenges that showed up in the second quarter.

It's possible that the company turned too far in the other direction when it projected just 19% revenue growth for 2021 (at the midpoint) and persistently weak profitability in early March. On the other hand, Stitch Fix has ratcheted down its growth projection twice in the past year, and Wall Street isn't eager to be burned a third time.

In either case, investors can expect more volatility ahead for this growth stock with the lack of clarity around Stitch Fix's sales and earnings potential heading into the report.