Despite the recent pullback, the cloud stock is still up roughly 9.4% year to date.

Shares of Rackspace Technology (RXT -15.70%) dipped 18.9% in May, according to data from S&P Global Market Intelligence. The cloud-computing stock fell after the company published its first-quarter results. 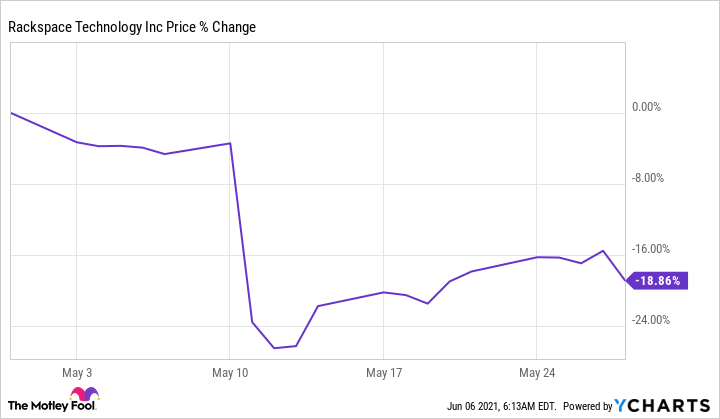 Rackspace published Q1 results on May 10, and shares pulled back precipitously following the release despite the company posting results that came in ahead of the average market targets. The company recorded non-GAAP (adjusted) earnings per share of $0.23 on sales of $726 million, while the average analyst estimate had guided for per-share earnings of $0.21 on revenue of $724.08 million. However, guidance for the second quarter appears to have underwhelmed the market, and investors dumped the stock following update.

Rackspace's sales were up roughly 11% year over year, set a new record in the first quarter, and topped the market's targets, but it doesn't looks like growth is expected to accelerate beyond that rate this year, and the earnings outlook is weaker than some analysts anticipated. For the second-quarter, Rackspace is guiding for adjusted earnings per-share between $0.21 and $0.23 between $735 million and $745 million. The company is guiding for roughly 2% sequential sales growth at the midpoint of its target and a 4% dip for earnings.

For the full year, management is guiding for earnings between $0.95 and $1.05 on revenue between $2.9 billion and $3.1 billion. However, prior to the company's recent earnings release, the average analyst target guided for earnings per share of $1.11 for the period.

Rackspace Technology stock has regained some ground early in June's trading. The company's share price is up roughly 3.3% in the month so far. 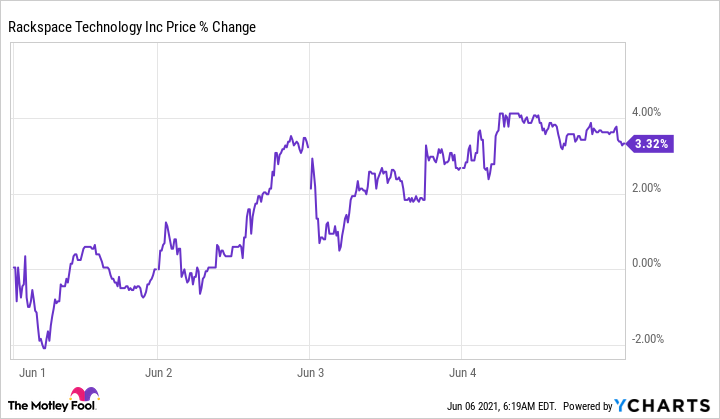 Rackspace is now valued at roughly $4.4 billion and trades at approximately 1.4 times this year's expected sales and 20.5 times expected earnings. The company is valued at reasonable multiples, but it faces strong competition in cloud infrastructure services, and it's growing at a slower rate compared to some of its peers in the broader cloud services space.

Rackspace's strength in platform-agnostic, multi-cloud services could prove to be a meaningful differentiator that helps accelerate sales and earnings growth if businesses increasingly adopt multi-cloud infrastructure. Cloud stocks are less popular right now due to investors focusing on reopening plays, but Rackspace could be worth a look for investors looking for plays in the space that trade at less growth-dependent valuations.