Please ensure Javascript is enabled for purposes of website accessibility
Log In Help Join The Motley Fool
Free Article Join Over 1 Million Premium Members And Get More In-Depth Stock Guidance and Research
By Will Healy - Jun 7, 2021 at 10:12AM

Intel may appear cheap, but can it make a comeback?

When Intel (INTC -2.27%) brought on a new CEO in February, some investors began asking whether the stock might now be a buy. The company led the PC semiconductor chip market in decades past but some management missteps amid the decline in PC sales created a situation where Intel fell behind both Taiwan Semiconductor Manufacturing (TSM -2.32%) and TSMC's client Advanced Micro Devices (AMD -4.47%).

Under CEO Pat Gelsinger, Intel has made some significant moves that could pave the way toward a return to the top spot in semiconductor production, but there are also indications that investors may need to exercise patience if they expect this chip stock to make that leap.

At first glance, Intel does not appear to stand above its competition in any meaningful way. TSMC will probably soon develop a faster chip than the 7nm semiconductor it currently markets. This comes at a time when Intel has struggled to move beyond making 10nm chips without TSMC's help.

That's not to say its competitive advantage couldn't soon improve. For one, with Gelsinger now in the CEO position, someone with an engineering background again runs the company. This could bring Intel's focus back to gaining a technological edge. Under the previous CEO, Intel appeared resigned to outsourcing manufacturing to TSMC. However, Gelsinger seems intent on reviving Intel's foundries, pledging $20 billion to expand the company's production capabilities.

Moreover, unlike AMD and other "fabless" companies, Intel does not outsource most of its manufacturing to TSMC, Samsung, and other fabs. This may eventually give Intel an edge since it operates foundries in the U.S. Today, approximately two-thirds of chip manufacturing worldwide now occurs in Taiwan, according to TrendForce. Taiwan has faced direct threats from neighboring China, which leaves the chip industry vulnerable to geopolitical forces beyond its control.

To this end, Gelsinger and other industry leaders have also lobbied the Biden administration for government subsidies to partially fund a revived, homegrown chip industry. Since Intel owns more fabs in the U.S. than any other company, it should give Intel a clear advantage if the political situation in Taiwan deteriorates.

The current geopolitical situation and a pressing chip shortage may also provide capital for making technological improvements, a process Intel has already started. With the chip development cycle taking between three and five years, investors will not know anytime soon whether Intel can catch TSMC. Nonetheless, AMD mounted a comeback in the mid-2010s when many observers believed it would not recover. Investors should not assume such a feat cannot happen again.

The good news for investors is that the market has priced Intel's current situation into its stock price. Intel sells for about 13 times its current earnings. This comes in well below AMD and TSMC, which trade at P/E ratios of 35 and 33, respectively. Consequently, some analysts see Intel as a dirt-cheap turnaround play.

Unfortunately for those going long on the stock, that valuation appears to reflect the company's growth rate. Intel's sales experienced a temporary increase due to heightened demand for chips during the pandemic. It reported revenue of $78 billion in 2020, 8% higher than 2019 levels.

However, the top-line surge did not trickle down to the bottom line. Generally accepted accounting principles (GAAP) revenue fell by 1% in both the fourth quarter of 2020 and the first quarter of 2021 from year-ago levels. In Q1 2021, net income also dropped by 41% to $3.4 billion over the same period. Investors should note that net income would have fallen modestly due to rising sales costs. Nonetheless, Intel paid a $2.2 billion restructuring charge as it lost a patent infringement suit with VLSI in March. 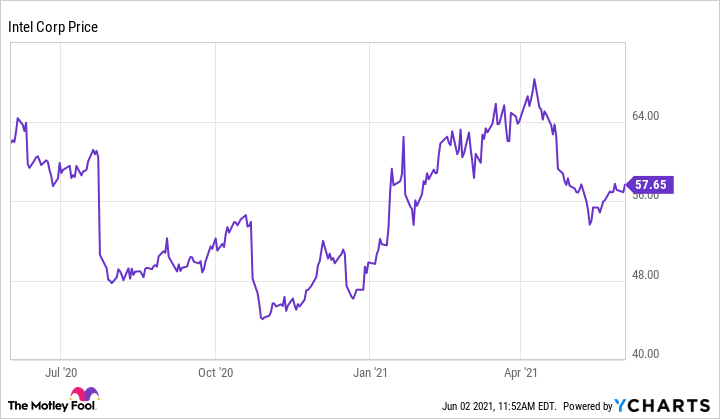 However, the company plans capital spending of between $19 billion and $20 billion during 2021. This is well above the $14.3 billion allocated to capital expenditures in 2020, a development that could help the stock longer term.

Should you buy Intel stock?

Given the promising investments and the stagnant financials, Intel stock appears somewhat speculative.

In the company's favor, Gelsinger's plan to revive Intel and the increased capital spending does offer hope, particularly when paired with its modest P/E ratio. However, revenue, income, and free cash flow numbers again point in the wrong direction. Additionally, it will take years to know if Gelsinger's moves today will help revive Intel long term.

Such uncertainty indicates investors should proceed cautiously, if at all.