Please ensure Javascript is enabled for purposes of website accessibility
Log In Help Join The Motley Fool
Free Article Join Over 1 Million Premium Members And Get More In-Depth Stock Guidance and Research
By Ryan Henderson - Jun 7, 2021 at 8:24AM

The company continues to surpass expectations, and the stock deserves more love.

Yeti (YETI 2.92%), the premium lifestyle and equipment brand, reported stellar first-quarter results last month. The company known for its durable coolers and outdoor equipment has been on a tear since its IPO in 2018 -- up nearly 400%.

With Yeti benefiting from strong demand, improved profitability, and an expanded product suite, there should be plenty for investors to be excited about. Let's see whether or not Yeti's growth can continue. 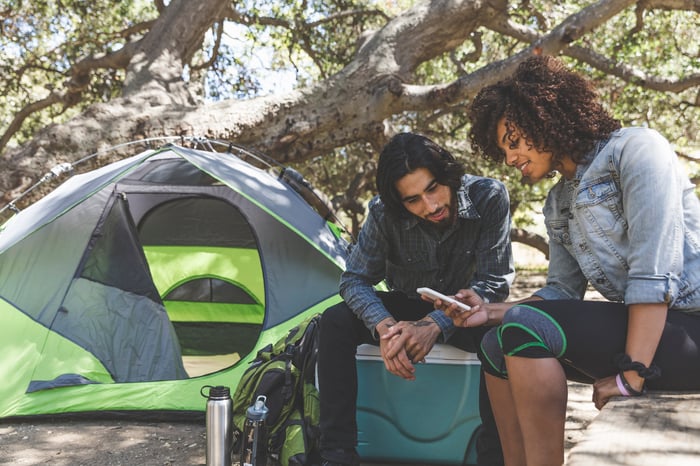 A look back at the first quarter

Yeti CEO Matthew Reintjes stated that this quarter marked the fastest growth Yeti has ever seen as a public company. Demand for all of Yeti's products, from coolers and equipment to drinkware and even soft goods -- like the company's new backpacks -- was exceptionally strong. Led by 59% growth in sales from the company's direct-to-consumer (DTC) channels, Yeti delivered record overall revenue growth of 42%.

The success of DTC channels also improved profitability as Yeti's gross margin has expanded from 42% in its first quarter three years ago to roughly 59% in this latest report. This impressive expansion also exemplifies the pricing power behind the Yeti brand. Widely known as the premier manufacturer of outdoor gear and equipment, its gross margin even eclipses that of other popular consumer retail brands such as Nike or Lululemon.

To piggyback on the successful performance, Yeti took steps to bolster the company's financial health as well. It paid down $5.6 million in debt and added another $44 million worth of inventory during the quarter to replenish supply after disruptions from COVID-19.

Executing on its strategy

As Yeti gets set to double down on its success over the past year, management has laid out two specific priorities -- connecting with customers and investing in digital solutions.

While Yeti is obviously leveraging some standard tech-savvy strategies like data analytics to help achieve those goals, it's also deploying a few unique ones. During the quarter, Yeti expanded its potential customer base by also expanding its product suite. The company successfully debuted its new line of backpacks, including duffel bags and luggage. And to supplement the launch, Yeti put its unique marketing style to work by running a series of durability tests selected by its followers and broadcasting them across various social media apps.

This strategy seems to have helped drum up consumer excitement, since management stated that it plans to pursue similar promotions in the future with new product launches. Yeti.com also rolled out walkthrough videos and 3D and augmented reality features this quarter, helping drive further growth of the company's direct-to-consumer sales -- which now account for 51% of overall revenue.

It's hard to argue with the success of Yeti's recent results. The company has been firing on all cylinders while simultaneously taking steps to ensure success down the road by paying down debt and bolstering inventory.

But it's also important to acknowledge that the pandemic spurred some adoption for Yeti's products. Even Reintjes mentioned during the second-quarter conference call of last year that demand was resilient thanks in part to "this unprecedented period driven by people's interest in being outside."

While it's unclear whether or not the increased outdoor activity will be a lasting trend as the economy reopens, Yeti has certainly capitalized on the opportunity. With more consumers sporting Yeti-branded products, increased adoption should translate to greater overall brand awareness.

Last month, management upgraded its revenue growth expectations for the year from 15% to 17% to 20% to 22%. If Yeti is able to sustain its strong momentum across the board, its current price to trailing 12-month earnings ratio of 43 won't be nearly as expensive as it looks at first glance.