Even as COVID-19 vaccines go unused in the U.S., there's plenty of worldwide opportunity for these two companies.

Stocks have been quite volatile lately. That's nothing new for investors who like stocks that trade in the Nasdaq Composite (^IXIC -0.45%), but after an amazing performance in 2020, the Nasdaq now has investors having to get used to moves both up and down on a regular basis. Monday was no exception, with the index hovering near the unchanged mark after having traded lower near the open before recovering.

The Nasdaq has had plenty of contributors to its performance over the past year, but one particular area of strength has been with COVID-19 vaccine stocks. Again on Monday, both Moderna (MRNA -4.94%) and Novavax (NVAX 1.68%) moved sharply higher, as investors looked abroad for opportunities for the two companies. 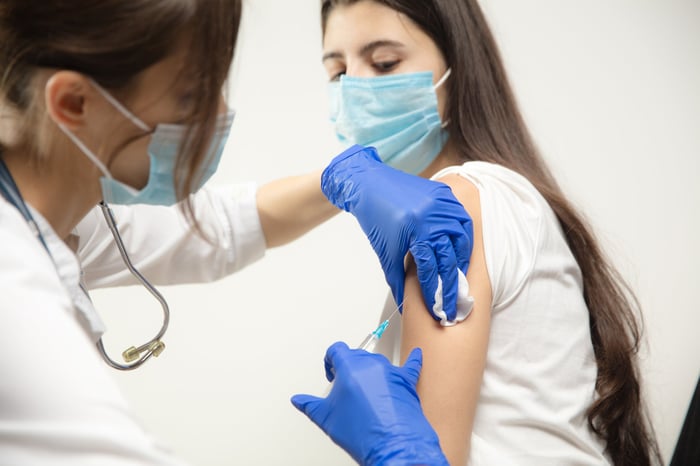 Shares of Moderna were higher by more than 7% on Monday morning. The biotech company moved forward with efforts to broaden the scope of use of its COVID-19 vaccines in key jurisdictions internationally.

Moderna submitted regulatory paperwork to receive authorization to administer its vaccine to adolescents age 12 to 17 with the European Medicines Agency. At the same time, Moderna made a similar move with the Canada Health regulatory body.

Interestingly, Moderna hasn't yet filed for similar Emergency Use Authorization from the U.S. Food and Drug Administration. The company has said it plans to do so, and is looking to work with regulators in other countries around the world to treat as many teenagers and adults as it can.

Investors can count on Moderna to make substantial amounts of money in 2021, making what has always seemed like a highly priced stock look almost value-like by comparison. The more patients Moderna can serve, the greater those profits will be, and the longer Moderna will be able to keep revenue and earnings coming in.

Meanwhile, shares of Novavax were up about 6% on Monday morning. Unlike Moderna, Novavax has had some serious issues with its vaccine production, but investors are hopeful that Novavax can ramp up its operations globally.

Novavax was a bit late to the vaccine game, and thus far, it has failed to file for Emergency Use Authorization to serve the U.S. market. As vaccination volume domestically wanes, Novavax's best prospects are abroad, but that has come with its own challenges. The U.S. government's blocking of exports of vaccine raw materials earlier this year stopped Novavax from helping other countries.

Now, however, the U.S. will release that block. That will help a key Novavax production partner in India begin to scale up vaccine supplies in that hard-hit nation. With more than a billion people in India, the market is a large one for Novavax to serve.

Even with today's gains, Novavax's stock still rests about 40% below its highs from earlier this year. If the company can successfully deploy its vaccine in India and demonstrate its effectiveness under some of the harshest conditions, then it would go a long way toward restoring investor confidence in Novavax and its prospects going forward. For those hoping that Novavax can eventually match Moderna's performance, now is a critical time for Novavax to execute on its business well.