The issue is likely to come up during House Air Force budget hearings.

Boeing (BA 0.28%) is facing scrutiny from lawmakers over the price of spare parts for its KC-46 tankers, with some government officials reportedly concerned that the defense giant is trying to recover some of the plane's development costs by overcharging for spares.

The KC-46 has long been an albatross for Boeing, with the company forced to swallow billions in cost overages during the development phase. But the plane is finally flying, and is scheduled to enter service with Japan later this year. 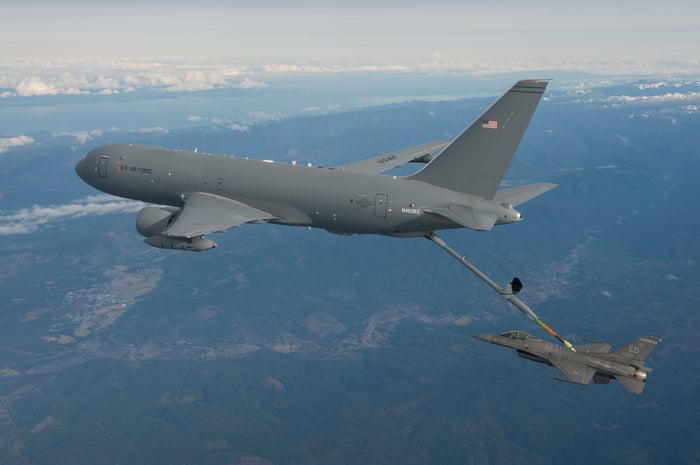 In April, the Air Force awarded Boeing an $88 million contract to supply spare parts to Japan. Defense News reports the deal included about $10 million in costs that Air Force leaders investigated and could not determine if they were fair or reasonable.

An unnamed government official expressed concerns to Defense News that Boeing is trying to use spare parts to recoup some of the development overages. And Rep. Rob Wittman, a Virginia Republican on the House Armed Services Committee, told the publication he intended to raise the issue during an Air Force budget hearing scheduled for today.

Boeing denied inflating the prices, saying the parts overages were caused by issues including pandemic-related supply chain disruptions and comparisons to spare parts that were inadvertently mispriced in prior orders. The KC-46 is based on the commercial 767 design, and commercial spare-parts markets were thrown into disarray during the pandemic.

Boeing offered to allow the Air Force to buy one disputed part, a navigation light manufactured by Honeywell International, directly from the source, but says the government ultimately decided to buy the part from Boeing.