Please ensure Javascript is enabled for purposes of website accessibility
Log In Help Join The Motley Fool
Free Article Join Over 1 Million Premium Members And Get More In-Depth Stock Guidance and Research
By Zhiyuan Sun - Updated Jun 8, 2021 at 11:15AM

This health insurance stock has caught the attention of Reddit investors who previously propped up GameStop and AMC.

Health insurance company Clover Health (CLOV 4.29%) went public via SPAC on Jan. 8, led by charismatic investor Chamath Palihapitiya and it has been a wild ride since. Its shares have soared more than 150% in the past five days as part of a short squeeze driven by the 10 million-strong r/WallStreetBets Reddit community. As of June 8, Clover Health is the fourth most shorted stock on the market -- with 36% of its float sold short.

The high shorting activity derives primarily from entities betting against the stock based on a report published by Hindenburg Research (which didn't establish a short position in the stock at the time) in February. Hindenburg made a series of allegations about Clover Health's business, including that its growth stems mostly from overcharging the federal government for Medicare Advantage reimbursements rather than from the quality patient care. The company allegedly received a civil investigative demand from the Department of Justice (DOJ) per Hindenburg. Will Reddit investors win this bull-bear tug of war and send Clover Health stock into millionaire-maker status (at the expense of hedge funds on the other side of the trade)? 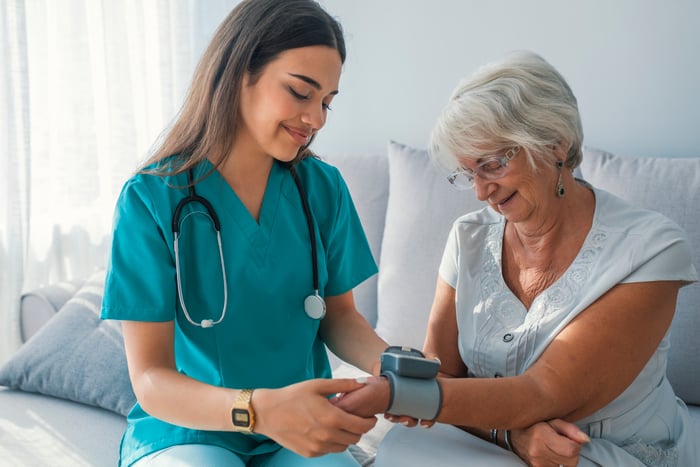 Which side does the data support?

Clover Health's revenue and member growth are genuine. Analytics from Q1Medicare, a third-party healthcare solutions firm, shows consistent growth of Clover Health beneficiaries in its New Jersey hub and across other states from 2020 to 2021 (for the same plan). I believe that the overbilling allegations are also significantly overblown, if not outright misleading.

During the first quarter of 2021, the company earned approximately $1,005 per member per month in Medicare rebates, which amounts to $12,060 annualized. That is well within the national average of $9,240 to $22,248 in reimbursements for each Medicare beneficiary between the age of 65 and 95-plus. The report alleges that Clover pays doctors twice the normal Medicare reimbursement amount ($100) as one of its main tenets for the bearish view on the stock. However, it's difficult to see if this has much of an overall impact on Clover Health's practices as its plans are not that far off (if not lower) than the reimbursement rates of the average Medicare Advantage plan.

It is also important to note that Medical Advantage organizations are legally required to pay 85% of premiums on members' health benefits and quality improvement. Not surprisingly, industry peers typically pay a number just around the minimum requirement to maximize profits. However, Clover Health spends up to 95.4% of its premiums on patients' medical expenses. Naturally, patients are more inclined to switch to plans that offer better value for their money.

In fact, Clover Health has the No. 1 highest member growth among 25 health insurers (around 25% per year) that offer Medicare Advantage Plans. The list includes major players like Cigna and Humana. So at this point, it seems like alleged problems, such as with its Clover Assistant software, are more about product development issues rather than a conspiracy to bill more out of Medicare.

Why patients are choosing Clover Health

The company offers as low as $0 monthly premiums and co-pays for primary care visits. There is also prescription drug coverage for all plans, including no co-pays for certain generics. Patients also enjoy a cap of $6,700 on their out-of-pocket expenses each year.

Last October, Clover Health partnered with Walmart to offer the Clover LiveHealthy plan. In addition to the benefits listed, patients receive preventive services, fitness perks, rides to medical appointments, plus free diabetes monitoring supplies. Members receive $1,000 in dental allowance, save up to $3,500 in hearing aids, and receive $100 to spend every quarter ($400 per year) on over-the-counter items at Walmart. Lastly, patients have the freedom to choose their doctor for no additional charge and without the need for referrals.

Clover Health's next near-term catalyst, aside from continued membership growth, is a new payment model sponsored by the Centers for Medicare & Medicaid Services that launched in April. The protocol allows Clover Health to directly contract with physicians nationwide for diagnosing patients using Clover Assistant. It expects this venture to generate $20 to $30 million in revenue this year and enroll up to 100,000 beneficiaries.

However, the biggest potential for Clover Health remains over the long term. Under President Biden's American Families Plan, there will be an option for individuals to enroll in Medicare from age 60 and onward instead of 65-plus. The President also plans to empower Medicare insurers with the ability to negotiate drug prices with manufacturers. Alongside benefiting patients, it would significantly reduce the amount of prescription medication expenses paid by insurers.

Like all Medicare insurers, the company derives the vast majority of its revenue from the government. Since it is Uncle Sam who is footing the bill (through the Medicare tax), the DOJ frequently probes industry peers to ensure compliance. Such investigations are not rare.

Even if there is suspicion of wrongdoing, companies can settle with the DOJ for a cash amount and that's probably what Clover Health would do if the allegation raised by Hindenburg has merit. In response to the report, CEO Vivek Garipalli said that "[it was] rife with ad-hominem attacks, sweeping inaccuracies and gross mischaracterizations." Meanwhile, Chamath acknowledged the DOJ inquiry.

Overall, with its top-tier member growth, high-quality insurance plans, and devotion to patients, Clover Health is a disruptor that is well-positioned to ride the growing Medicare reform. Capital-wise, the company also has no debt whatsoever, compared to its $720 million cash on hand.

The company is trading for about six times price-to-sales going forward. That is pretty cheap, considering Clover Health is on track to grow its revenue by over 20% this year. It is a health insurer that is rapidly gaining traction for the benefit of patients, not just shareholders. I would not be surprised if the stock becomes a millionaire-maker down the line, especially if Medicare reforms come later than anyone expected.