Please ensure Javascript is enabled for purposes of website accessibility
Log In Help Join The Motley Fool
Free Article Join Over 1 Million Premium Members And Get More In-Depth Stock Guidance and Research
By Zhiyuan Sun - Jun 8, 2021 at 8:10AM

This biotech's coronavirus vaccine candidate could be the next to hit the market -- but a lot of its potential success has been priced in.

Since the beginning of the year, shares of German biotech CureVac (CVAC -0.30%) are up 43%. That is far better than the industry benchmark's gain of just 1%, as measured by the iShares NASDAQ Biotechnology ETF (IBB -1.65%).

Vaccine drugmaker stocks have done really well when they successfully attain regulatory clearance for their candidates. Can investors get rich just off a small bet on CureVac's potential to do that? 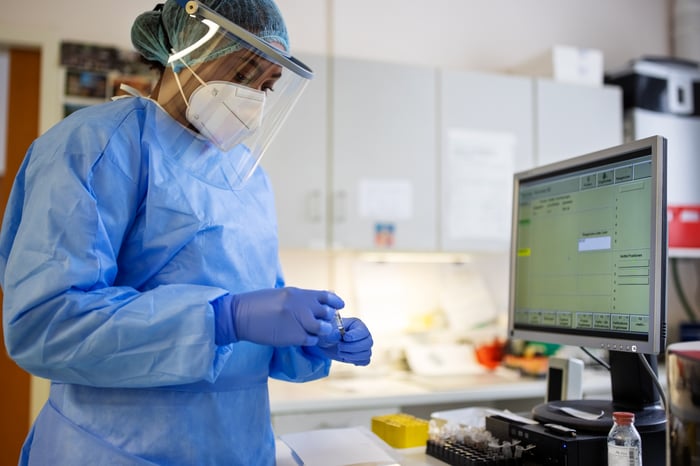 CureVac's vaccine candidate, CVnCoV, is still in phase 2b/3 clinical trials as vaccination programs are ramping up across all developed nations. Despite the setback, the company still has room to ship hundreds of millions of doses to vastly under-vaccinated countries in Eastern Europe and Latin America, where it's conducting the 40,000-participant vaccine study. CureVac expects to file for Emergency Use Authorization (EUA) for the vaccine from the U.S. Food and Drug Administration in early June.

On May 28, CureVac announced that its independent Data Safety Monitoring Board (DSMB) had found no safety issues associated with CVnCoV during the first interim analysis of the investigation. Therefore, it recommended the study proceed as scheduled.

The study design was finalized last December and did not consider the highly infectious, highly resistant B.1.617 variant strain that is now rampaging across the globe. In a recent study, Pfizer-BioNTech's coronavirus vaccine Comirnaty induced neutralizing antibodies in 79% of the population after the first dose. However, that number fell to just 32% against the B.1.617 variant. Researchers observed a similar drop in comparative antibody levels after the second dose.

Since the trial's primary endpoints evaluate CVnCoV's effectiveness against COVID-19 of any severity, not just serious/critical illness (where vaccines tend to be the most effective), there is an elevated risk that CureVac may not hit those benchmarks during the second and final analysis. Keep in mind that Pfizer-BioNTech's vaccine met the high efficacy threshold on the first interim analysis (against the original coronavirus strain).

Given its market cap of $21.62 billion, investors are definitely expecting a lot out of CureVac. The company has made a lot of progress this year, including increasing its cash balance to 1.497 billion euros (with no debt), lifting its U.S. export restrictions for vaccine materials, etc. It has 405 million doses of preorders from the E.U. for CVnCoV, with the capacity to produce 1 billion doses next year.

However, its lack of product revenue would mean CureVac has a lot to lose if it cannot bring in CVnCoV to market. Though not directly comparable, there is already a vaccine on the market which is 78% effective against variant strains overall and 100% effective against serious illness caused by them. Investors should pay attention to the DSMB's next move. If the trial continues as scheduled after the second interim analysis -- that could spell out trouble. For now, there is too much uncertainty in its future to warrant CureVac a millionaire-maker biotech.