Please ensure Javascript is enabled for purposes of website accessibility
Log In Help Join The Motley Fool
Free Article Join Over 1 Million Premium Members And Get More In-Depth Stock Guidance and Research
By Evan Niu, CFA - Jun 8, 2021 at 7:00AM

Apple (AAPL -0.23%) hosted its annual Worldwide Developers Conference on Monday, unveiling the next major versions of its flagship platforms using the same virtual format as last year. The event costs around $50 million to host each year, according to recent testimony from former marketing chief Phil Commercials as part of Apple's legal battle with Epic Games.

Here's what the Mac maker has in store for later this year. 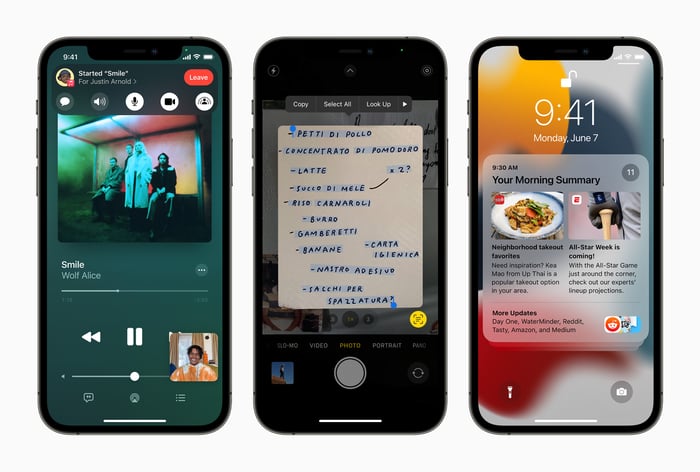 With people making more video calls than ever before, Apple is rolling out a handful of improvements for FaceTime to better compete with Zoom Video Communications, which became a mainstay for millions of people in 2020 amid the COVID-19 pandemic to stay connected and productive remotely.

FaceTime will receive various performance improvements such as spatial audio and voice isolation, as well as a new grid view to better organize conference calls with multiple people. Apple is creating FaceTime links that can be shared, included in calendar events to plan a call, and even accessed from a browser on other operating systems like Android or Windows. Some of the new features are comparable to Zoom, although it seems unlikely that FaceTime will displace Zoom in enterprise settings.

The Cupertino tech giant is also adding SharePlay, a variety of ways to engage in shared experiences with other users. That includes audio and video content as well as screensharing. Apple has created an application programming interface (API) to allow third-party services to leverage the feature also.

Apple is introducing a new feature called Focus, which essentially creates different profiles, such as for work or personal use. Each profile can be customized, including what notifications are prioritized or home screen layouts.

Other improvements for iOS include better sharing options in Messages, improved image recognition, a redesigned Weather app, and adding ID cards to the Wallet app for participating states.

Some of the updates to iPadOS are simply playing catch up to iOS 14. Apple is bringing a couple of features that were debuted last year to its tablet, such as App Library and the ability to place widgets anywhere on the home screen. The tablet's operating system is also getting better ways to organize windows for multitasking, as well as a new way to access notes with Apple Pencil from anywhere.

Apple is strengthening several privacy protections that it offers across platforms. The company will crack down on invisible tracking pixels that are sometimes included in emails, which can covertly tell the sender if the email was opened as well as potentially the recipient's IP address and location information.

Invisible tracking pixels have been around for years but attracted attention a couple of years ago, when it was revealed that email service Superhuman was using them. Privacy advocates now warn that so-called "spy pixels" have become an "endemic" problem.

iCloud will get an upgrade to iCloud+ at no additional cost. Apple will encrypt all traffic information leaving your device and transmit that information through 2 relays to help protect user privacy. The company is also expanding the email relay feature initially introduced in 2019, allowing users to create randomized emails that can easily be deactivated or deleted.

The Mac goes to Monterey

The next version of macOS will be dubbed Monterey and includes many of the new features from iOS and iPadOS, such as Focus, SharePlay, and more. Apple is leveraging its Continuity technology to introduce a way to use the same keyboard and mouse to simultaneously control multiple devices or share files, similar to the Flow technology that Logitech offers for its popular accessories.

Macs will become AirPlay receivers, allowing users to beam content to their computers from mobile devices. Shortcuts, introduced to iOS a few years ago, are coming to the Mac to let people automate basic tasks and improve productivity. Desktop Safari is also getting a makeover and new ways to organize tabs.

All of the major updates will be released in the fall alongside new products as usual.