The Mac maker is launching a single sign-on service without privacy compromises.

One of the most interesting things that Apple (AAPL 0.23%) unveiled yesterday at its opening WWDC 2019 keynote was a new consumer-oriented single sign-on (SSO) service called Sign In with Apple. The service will compete with similar offerings from Facebook (META -2.88%) and Alphabet (GOOG -0.36%) (GOOGL -0.58%) subsidiary Google, where users can sign up for third-party apps and services with a single login account. Facebook's and Google's SSO services offer "personalized" experiences, which is to say they use tracking for ad-targeting purposes.

As part of Apple's privacy crusade, the Mac maker is hoping to offer all of the conveniences of SSO without having to compromise on privacy.

In an interview with CBS Evening News after the keynote, CEO Tim Cook denied that Apple was taking aim at any of its Silicon Valley neighbors. "You know, we're not really taking a shot at anybody," Cook told the outlet. "We -- we focus on the user. And the user wants the ability to go across numerous properties on the web without being under surveillance."

Contrast that statement with how software chief Craig Federighi presented Sign In with Apple:

It's hard to argue that Apple isn't taking a shot at Facebook and Google after prominently displaying their names when unveiling a competing SSO service and proceeding to criticize them. "This can be convenient, but it also can come at the cost of your privacy," Federighi said. "Your personal information sometimes gets shared behind the scenes, and these logins can be used to track you."

In order to give users greater control over how their data is shared, users can choose to mask their email address, in which case Apple will create a randomized email address that forwards to the user's real email address, and the user can deactivate any of the relay addresses at any time. 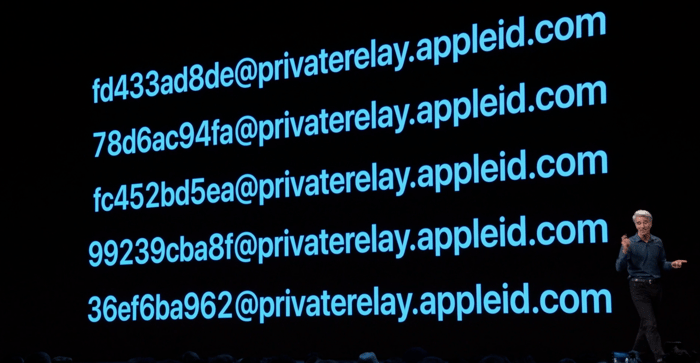 In a somewhat controversial but not entirely unexpected move, Apple will require developers to use Sign In with Apple whenever third-party SSO options are presented as well. For example, Facebook login engineer Brad Hill criticized the move on social media.

Apple could have required apps to support only/at least one sign up method(s) with specified privacy features. Everyone in the market would compete to offer them.

What they said was: Apps must offer Apple Sign-In.

I've already said Apple was correct in identifying a market failure for users and I'm giddy to see the specific features offered.

But it is also using its platform power to privilege its own offering, not setting neutral pro-privacy requirements.

Apple is taking a characteristically heavy-handed approach to push its own offering on to its user base, and each new privacy-oriented feature or service that the company introduces will incrementally chip away at Facebook's and Google's data-vacuuming engines, regardless of whether or not Cook publicly acknowledges it.